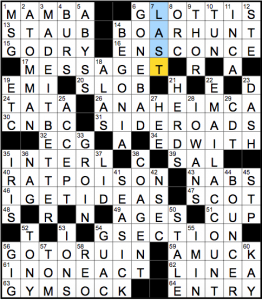 Wow, this was a tough one! I’m still not 100% sure I understand the theme fully, but I’ll do my best to explain it. There are three theme entries that each contain a synonym for some kind of yarn-like strand, which has been woven across two rows in alternating, unchecked squares:

The visual impact of the grid is undeniable. It’s a 14×16 grid with a lot of unchecked squares and tons of really long entries. Some really nice stuff in the grid (BOAR HUNT, GYM SOCK, GO TO RUIN, RAT POISON, ATOM MAN, ANAHEIM CA) and some stuff I didn’t care as much for (IN ONE ACT, MADE IT BETTER). Bit of a dupe with GO DRY and GO TO RUIN, but a forgivable dupe.

The theme was difficult for me to suss out, partly because there wasn’t really a revealer to… tie this one up in a bow. It’s a demerit in and of itself that I still don’t know if I got everything there was to get about the theme. The thing about a theme like this is that when you have a ton of unchecked squares, there are a lot of opportunities for the solver to be stymied — the unchecked square that gave me the most trouble was the H in HERDS [Drives in a field], and I could see the C in COAGENT [Associate in finance, say] being tricky as well. Even so, this an impressive construction (like I said, so many long entries! Basically a themeless grid with a really hard gimmick!) and a new and interesting idea for a theme, which is basically all I ask for from a Thursday.

There were some really fun clues, like [Blue-green?] for SEASICK and [Outing at which participants go hog-wild?] for BOAR HUNT.

This one will provoke a lot of conversation, I think. Until next time!

As I think I said last year, I don’t really know how to review a vwllss crsswrd. I suspect some people love them and some people hate them and few are in between. I love them.

The cluing has to be easier than most because the difficulty comes from the lack of vowels. In this crossword, 21a [Technique for a test-tube baby] is a straight-up definition and gave me a nice long foothold. The answer, of course, is NVTRFRTLZTN (in-vitro fertilization). 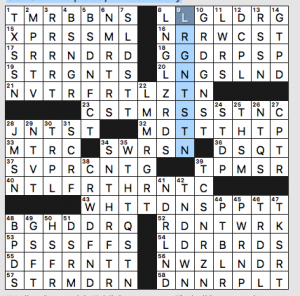 I overthought 9d [Colon’s place, anatomically] because I figured that laypeople think the colon is the entire LRGNTSTN (large intestine) so I didn’t put in the obvious answer. (For the record, the large intestine is made up of the colon, cecum, and rectum).

We have a sort of before-and-after theme today involving LOCKs and KEYs. The title indicates that those additions will be coming at the end of the original base phrases. 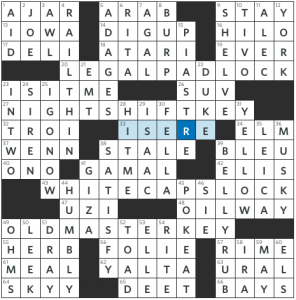 Let’s start with the title. I’ve never heard that as an in-the-language phrase before. I think I’ve heard, “Safe at last!”, but not “Secure…”

I didn’t find the theme answers themselves humorous or engaging, and they seemed inconsistent as well. For example, you have two entries that refer to PCs, and two that don’t. And I think that people would more commonly just say “Shift” rather than “Shift key.” But Caps Lock is also a key, yet it doesn’t have that appended to it.

Further, it just seems odd that the LOCKs and KEYs are just sitting there. A KEY should go into a LOCK, so I would find the puzzle a lot more interesting if that could have somehow been represented.

And then there was some unusual and unfortunate fill.  For example, I do not remember Remember WENN, the “1990s AMC series.” Actually, I don’t think I’ve ever heard of it. OILWAY [Lubrication channel] is both weird in its clue and in the fact that it is a thing that exists. Do they not always pipe oil whenever they need to transport it? I didn’t know FOLIE [___ a deux (shared delusion)], nor GAMAL [Nasser’s first name], but those are fair and I could get them from the crossings. The one that triggered the scowl-o-meter the most was crosswordese ISERE [Grenoble’s department] crossing uncommon foreign currency PIASTRE [Division of the Egyptian pound]. If I didn’t recognize ISERE as crosswordese, I would surely have been Naticked there.

Also, I had CAN / I GO NOW instead of MAY / I GO NOW. I ended with an error because I forgot to go back and check that SE section. But the crossings were RICE and BANS, two legit words, and in the case of RICE, preferable to RIME (for me anyway).

RAIL THIN is good, and BELLY RUB is great, but my favorite moment was when I realized [Born to run?] was cluing YELLOW. Lovely, lovely clue. Runner-up: [Set of dishes] for MEAL. [Post-bottle event] for BURP is good too; that one’s for those of you with infants.

Too many sticky and befuddling points in this one for me. 2.9 stars. 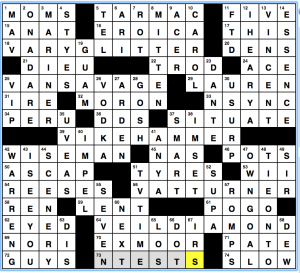 We’ve got GARY GLITTER, DAN SAVAGE, MIKE HAMMER, NAT TURNER, and NEIL DIAMOND, but with a V in front of their names, which ties in with the FIVE GUYS revealer.

The rest of the fill on this was pretty straightforward, though EXMOOR managed to trip me up towards the bottom of the puzzle.  What did you find tricky? 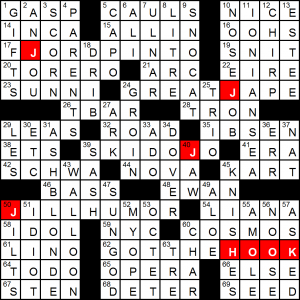 I’ve seen the FORD to FJORD stunt pulled a few times, usually as FJORDEXPLORER or FJORDMUSTANG, so it was quite easy to pick up the gist of the theme. That and it’s Friday at the LA Times, and like as not we’re adding letters! The J’s are added in different places each time, both in the word and the phrase – at least it’s consistently inconsistent though. Throughout the solve I was hoping for a revealer of some sort to elevate it above the mundane. Well, there is a revealer, GOTTHEHOOK, and although I can visualise the act in Vaudeville, I’ve never heard it called that. Dictionaries label it “North American slang”, so it’s probably just me.

It felt like the short fill in general could’ve been polished a tad. Maybe it was because I was feeling a tad underwhelmed by the theme, but CAULS (which are unrelated to CAUL fat, and this confuses me totally), seemingly easy to avoid and hopelessly contrived ETS, and the way STEN was clued as [Scandinavian name meaning “cliff”], STEN all served to put a general dampener on my enjoyment factor. Oh well, KNISHES and WALLOON are fun to say.