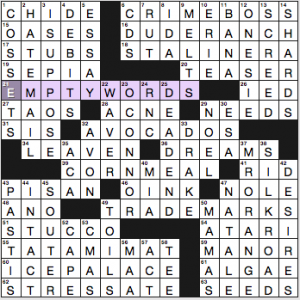 Lots of crisp fill here. You’ve got your CRIME BOSS, the hot gas of EMPTY WORDS, the makings of some Mexican food with AVOCADOS and CORNMEAL, STRESS-ATE, HATE MAIL, “I SUPPOSE” instead of the more common entry IGUESSSO, Sandra Day O’CONNOR and David SOUTER, MR. ORANGE from Reservoir Dogs, and the SILK ROAD.

Did not know: 40d. [Brand of facial brush], MIA. Apparently this is a $99+ device that delivers sonic waves to the brush part, and it’s used for cleansing. I don’t wear makeup or have 28a ACNE, so ¯\_(ツ)_/¯ . (I do appreciate seeing clues that will probably resonate with women more than men.)

3.9 stars from me. Pretty good but not great. 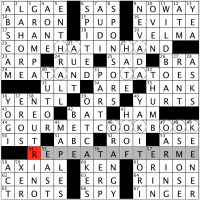 Each themer has the letter sequence ME and then another letter sequence that repeats (HA HA, TA TA, and OOK OOK), respectively — from now on I’m going to say ook ook instead of goodbye. These are three nice finds! Fill-wise, we’ve got the Chronicle’s reliable combo of academic culture and trivia: 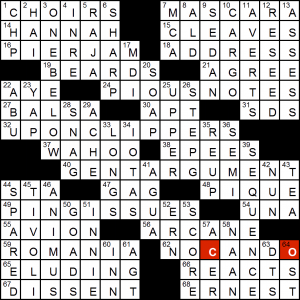 The revealer is very clever – NOCANDO is in fact NO C AND O. Letter deletions are more tricky to make work in general than letter additions (and I wrongly accused yesterday’s of being a Friday!) This one is helped by its consistency. The CO is always subtracted from the beginning of the first word of each phrase, making it easier to puzzle out. So: (CO)PIERJAM; (CO)PIOUSNOTES, (CO)UPONCLIPPERS, (CO)GENTARGUMENT), (CO)PINGISSUES.

The rest of the puzzle has… a lot of compromises. So much that I would have preferred it rewritten, possibly with one less theme entry if need be. ONEBELOW as clued is just not an entry. Arbitrary spelt-out temperatures are neither interesting nor “in the language”. It’s like Random Roman numerals (MDI), but sticking out a whole lot more. STEPG is also not anything. You can’t just have STEP and a letter and call it an entry. Even with these, ASSESS, RESEED and DISSENT show a need for a lot of free squares to hold the puzzle together.

[Golden State traffic org.], CHP is California Highway Patrol. That’s remarkably regional, but it is the >LA< Times and well, they made a TV show about them (I only connected the dots afterwards though).