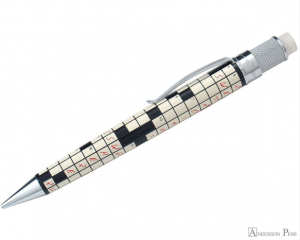 We’re heading into a Team Fiend Saturday! Derek and family are coming to the Windy City and we’re meeting up for dinner at Nando’s Peri-Peri. That Nando’s location is close to Anderson Pens (it’s in the Palmer House hotel), which is basically a toy store for people who like nice pens and pencils. It’s where I got a hefty mechanical pencil with a sturdy lead and a crossword design (pictured at left), and where my husband picked up a fine-point fountain pen for drawing. I know Derek will find lots of cool things! 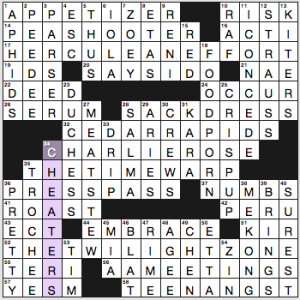 Moving on to the crossword—wow! It evokes or references two different big creeps who wrecked a lot of women’s careers. There’s CHARLIE ROSE, 34a. [Talk show host named in the #MeToo movement]. Hey. He wasn’t “named in the #MeToo movement.” He behaved in inappropriately sexual ways with far too many of the women who worked for him, and he was the top dog so what the hell were they supposed to do besides put up with the abuse or quit, impeding their TV/journalism careers? (See also: Harvey Weinstein.) And then there’s 49d. [Julie ___, host of TV’s “Big Brother”], CHEN. She made a point of signing off on TV just recently as “Julie Chen Moonves,” expressing her solidarity with her creepazoid husband Les, who sandbagged Linda Bloodworth-Thomason’s career at CBS, greenlit a crap-ton of male-centric shows while nixing most shows with female leads, and did gross sexual harassment as well.

Anyway, on the editorial front, I’m trying to avoid lending grid respectability to such creeps. LES Misérables, yes. LES Moonves, nope. Imagine having been victimized by one of these dudes and then seeing his name in your escapist crossword.

4.2 stars for most of the puzzle, and –2 stars for CHARLIE ROSE. (I suspect the constructor may have written the puzzle before we found out what Rose’s colleagues already knew about him.)

At heart, it’s an add-a-long-E-sound theme, but it’s tighter in that the newly-created words are all cartoon characters. 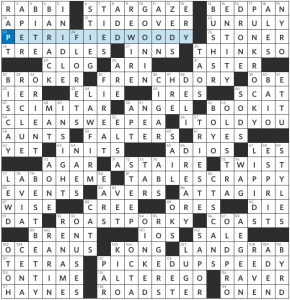 As someone who never wanted to grow up (I remember one time as a kid when someone asked me if I could pick an age to be for the rest of my life, and where other kids would all pick some grown-up age, I picked four), this puzzle was right up my alley. There’s a lot of fun in this theme and it’s nicely tight and consistent. Bravo!

After solving this puzzle I immediately got in the car for a 5-hour road trip. While driving, I was thinking of other possible theme answers that might fit. Can you come up with some? Here’s what I got:

If the theme didn’t float your boat, there’s great fill here, too. I like STARGAZE, ALTER EGO, ROADSTER, TIDE OVER, LA BOHEME, “I TOLD YOU,” SCIMITAR, ATTA GIRL, LAND GRAB, ASTAIRE & ROGERS, OLD PRO, BISCAY, “GO ON IN,” LAW FIRM, TRIESTE, and OCEANUS. Oh yeah, and there’s STONER, BEDPAN, CT SCANS, and FLORETS. Wow. Quite a lot of good stuff in there.

I did not know TREADLES [Features of some sewing machines], despite my using a sewing machine once a year to hem up my daughter’s school uniform pants. What’s a treadle?

I recall the cluing felt fresh and fun, too. I’d point some out, but it’s late on Friday and I’m tired after the drive. How about if you let us know which ones stuck out to you?

Fun and fresh puzzle. Four stars from me. 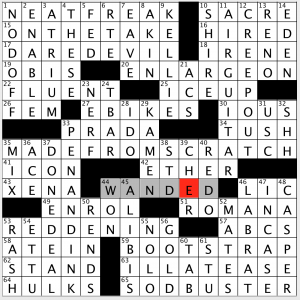 A nice, smooth 72-word grid from Brian E. Paquin is our LAT challenger puzzle this Saturday. I may have mentioned it before, but I don’t believe I know Brian, and I don’t think it’s a pseudonym for anyone. Not too difficult, but lots of interesting stuff in here. At least I didn’t find it hard; that sometimes is a subjective opinion! A solid 4.4 stars for a stellar puzzle.

Some of that interesting stuff: 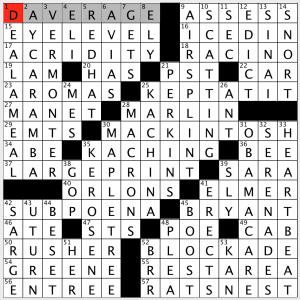 This week’s Stumper didn’t give me any fits at all. It was TRULY “Less Rough!” I normally would be quite proud, but this only means when they try to solve this with downs-only on Twitch in the next week or two, they will be done in 3 minutes! My time was under 7 minutes, which I am sure is a record for me. Anything under 10 minutes on a Stumper is rare for me, so this was quite a nice surprise! The caveat is, as always, look out next week! 4.3 stars for a wide open 70-worder from Stan with virtually ALL easy answers. Great!

I could go on and on, but I am off to Chicago today to see some sights and meet up with Amy Reynaldo! It should be a great day!