I’ve driven a long way this weekend so this will be a short review. The theme is game shows, and it’s no mystery. 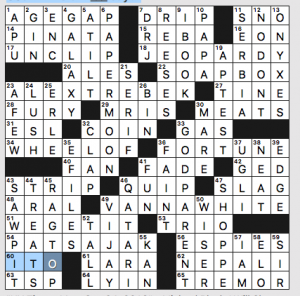 “I’ll take Annoying Crossword Tricks for $200.00, Alex.”
“Answer: Many solvers dislike this trick because they have to keep looking around the grid.”
“What are ‘cross-referenced clues?’ ”
“Correct!”

So yeah. Every single theme answer is cross-referenced. I know it’s a Monday puzzle and the theme is certainly accessible. I didn’t think it was all that much fun.

What I didn’t know before I did this puzzle: that VIJAY Singh won the 2000 Masters.

Can we have a heart to heart? I liked this breezy Monday LAT puzzle! 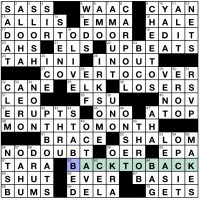 17A: DOOR TO DOOR [How canvassers usually work]
27A: COVER TO COVER [How page-turners are often read]
48A: MONTH TO MONTH [How apartment leases sometimes run]
62A: BACK TO BACK [How pistol duelers typically stand]

I appreciated how parallel both the theme entries and clues were in this puzzle – it made for a fun, quick solve. I enjoyed entries like SASS, CHEETOS, TAHINI (sadly, not Tahani from The Good Place), SHALOM and ALOHA, NO DOUBT (sadly, not the band), and CARPOOL. I was grateful that there wasn’t much IRKSOME fill – only OPCIT, CLEM, and NTSB gave me pause. Thumbs up! 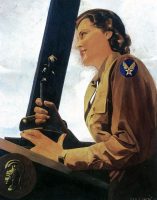 The Women’s Army Corps (WAAC) was an active duty women’s auxiliary branch of the US Army from 1943 until 1978, at which point they were integrated with men’s units. Unfortunately, even though so many women fought for our country, their entry into the armed forces didn’t come easily: “In 1943 the recruiting momentum stopped and went into reverse as a massive slander campaign on the home front challenged the WACs as sexually immoral. Many soldiers ferociously opposed allowing women in uniform, warning their sisters and friends they would be seen as lesbians or prostitutes.” Yikes. It’s a good thing we respect women and listen to their experiences a lot more these days, right? #SASS

Words that can precede “box” are presented at the bottom of five Down entries. DROPBOX, with the clue [Big name in the cloud, and a hint to the starred answers] is the revealer at 44d. 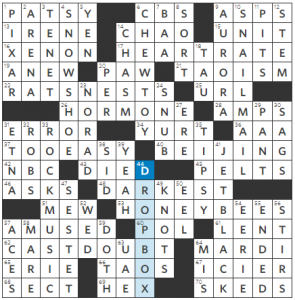 Conceptually, this feels off. The revealer would seem to indicate that only the “box” part of the theme entries should drop down leaving the remainder in the Across direction. That’s a much more challenging puzzle to make, but to me, it makes the most sense with that revealer.

That said, this is a lovely grid. All the theme answers are lively and in-the-language, and the non-theme fill is top-notch. We’ve got HEART RATE, RATS’ NESTS, HONEYBEES, and CAST DOUBT, plus HORMONE, BEIJING, and TOO EASY. That’s a lot of good stuff for an early-week easier puzzle. So if you look at this puzzle as a words-that-can-precede-another-word theme, then this is a really good example of the form. It’s just that the revealer seems to indicate that something else is going on when it’s not.

Five things today for you, my listeners:

ARE YOU DONE? Pretty much. 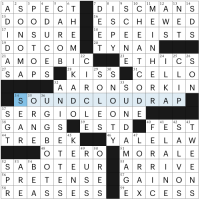 Woah this was tough. Got majorly Naticked (if it’s the New Yorker, are you “Algonquined”?) in the SW with that RUSS/OTERO crossing. Five things: