Here’s my “syst” (h/t Fill Me In) for solving WSJ metapuzzles: 1. solve on the (ugh) WSJ’s webapp; 2. screenshot the grid (since I’ll need it for the Fiend post); 3. print out the screenshot and a pdf of the entire puzzle with clues, stare at them, and wait for something to emerge. Five-letter word, huh? My mind is wandering, and I think, What a funny coincidence! We have [1a: Thing that you need to cross space to reach]: MOON, and also right there in the center of the grid, we have the name of one of Mars’s moons, Deimos, separated by a space in OPUS DEI and MOSAICS. That must be a rabbit hole — I mean, I probably have moons on my mind since I’m currently reading book seven of James S. A. Corey’s fantastic space opera, The Expanse (also three seasons of a fine television drama on SyFy, and picked up by Amazon Prime for a fourth season), in which humanity climbs out of the gravity well of Earth to colonize the moons of the solar system, with mixed results. Oh! 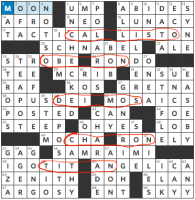 Callisto, Oberon, Deimos, Charon, Titan — doesn’t spell anything. Following Metasolving 101, if you have a list of things, think about whether the list of things suggests another list of things (Metasolving 101, Lesson #925: Research is your friend), and write down that list — in this case, let’s see if we can find anything by listing the planets that these moons orbit:

Taking the first word of each planet, in order of the moons’ appearance in the grid, we have JUMPS, which is a “five-letter word” suggesting what solvers do to get to each moon in the grid (hence the title, “Bound for Space”), and our metaanswer. 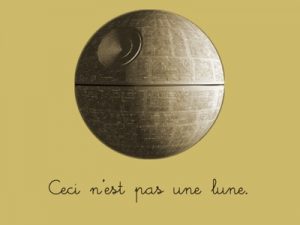 Because I didn’t get to talk about Magritte enough yesterday

Solving group pal Gideon writes: “There is a glaring flaw in the WSJ meta — 16a. You jump across space and land on LUNA.” The term Luna often refers to Earth’s Moon, particularly when distinguishing it from other moons in our system. It could be, as solving group pal Conrad suggests, that the enumerations in specific clues were meant to rule out 16a from the set. What do you think, listeners? Flaw? Or Easter Egg? Bug or feature? Was this meta the [64a: Overhead point on the celestial sphere]: ZENITH of your solving experience? Or just more [16a: Extreme folly]: LUNACY to round out the week?

*Note: So not here for your “Pluto is not a planet” bullshit. Take it somewhere else.