A familiar-ish Birnholz puzzle today- Letter deletions that result in wacky phrases. Of course, the deleted letters spell out an appropriate revealer. In this case, it’s NEWS CLIPPING.

THEME ANSWERS: (All clues start with “EXCLUSIVE:” to emulate a breaking news item as indicated by …) 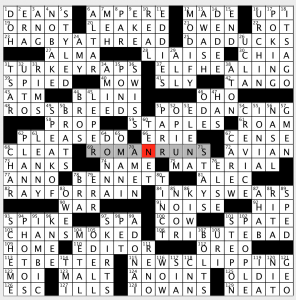 This puzzle embodies Evan’s signature style. Rather than simply yanking out the same letter from each of the theme answers, he changes it up and builds to a revealer. A similar idea ran about a month ago in “It Takes Two,” where added letters spelled out MIXED DOUBLES.

While definitely a light and fun solve, some of the answers didn’t land solidly for me. Most notably, E.T. BETTER was an outlier since the resulting phrase is pronounced differently than the base phrase. In some others, a word in the altered phrase changes meaning in order to accommodate a Noun/Verb “news headline” pattern. For instance, DAD DUCKS refers to the act of ducking while the base phrase refers to actual ducks. The same happens with ROSS BREEDS, INKY SWEARS, and TRIBUTE BAD (though in that last one, TRIBUTE originally served as an adjective).

The meaning of SMOKED is also changed in CHAN SMOKED– while I understand the purpose of changing the others in order to fit a pattern, I don’t quite get why the meaning was changed in this one. In the base phrase, SMOKED is already a verb, so cluing it as [Action star Jackie satisfied a nicotine craving] would’ve still worked. Perhaps the thought of the beloved actor puffing on a Camel was off-putting?

But I digress- It’s Evan’s style. He doesn’t care about overly-tight conventions. I’ll take it.

3.1 stars from me. Even with my nits, WaPo puzzles are typically better than average imo. 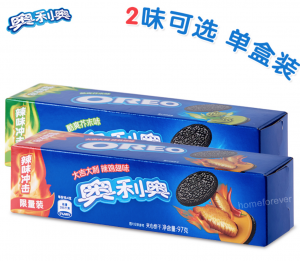 No really… it’s a thing. Get ’em while they’re hot! (pun intended) 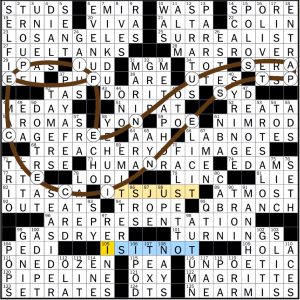 The circled letters spell out CECI N’EST PAS UNE PIPE (“this is not a pipe”). In the iPad app, when you finish the puzzle, the circled letters are connected by an animated line in the shape of a pipe — another exploration of the possibilities of the app to enhance the solving experience. This was lots of fun! I love the painting (it is, arguably, one of the most famous paintings of all time), and I thought the constructor did a nice job of finding theme material that related to the painting in a way that went beyond trivia.

Department of Put That in Your Image of a Pipe and Smoke It: AAH, I won’t LIE: YON fill suffered a bit from the effort it took to produce such a fun theme. The UNPOETIC trio of RAS, TAS, and WAS in the same quadrant — that’s a NAE from me, MAC, SRSly, a chorus of NAYS. EMITTERS must PAY A FEE (but they’re both rather roll-your-own), REATA with an E, SEA SIDER, OTO and UTES? All add up to a NEAR MISS.

What’s uncanny — some might say surreal, bien sûr — is that I’ve encountered references to this painting twice in the past few weeks. It was the subject of a question in Learned League on September 4:

and, just yesterday, I retweeted this morsel of hilarity:

Saw this cool pipe in an art gallery. I can’t read French but I think it’s a great pipe!!! pic.twitter.com/HZVxIsovfF

… and there of course are many, many memes and parodies (ce ne sont pas des mèmes), of which, listeners, I’ll leave to you to post your favorites in the comments.

I usually like Gail Grabowski’s puzzles. This one was not up my alley. I figured out the theme quickly and there’s no wordplay or humor in the theme answers or the revealer. Look, there are phrases that contain the word ADD spanning the end of one word and the beginning of another! Boy howdy. 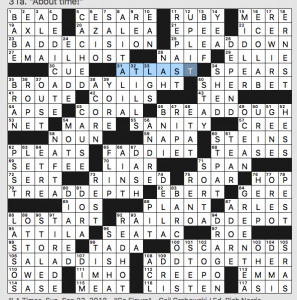 As I said, not my favorite.

What I didn’t know before I did this puzzle: that Roger EBERT wrote a book called “I Hated, Hated, Hated This Movie.” 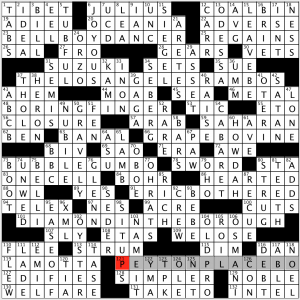 What’s a little BO among friends? Add it to some phrases and hilarity ensues. 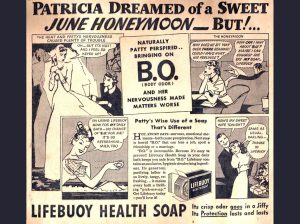