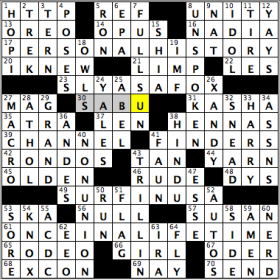 Good day, everybody! I hope all is well with you as we begin a new – and chillier – season! For some reason, I was pretty cold and did not solve this puzzle as quickly as I should have, as the theme should have alerted me to what was going on with the theme entries a litter faster than when I got it. Speaking of those theme entries, four of them are multiple-word entries in which the last word is also the name of a TV network, with the two theme entries in the middle, CHANNEL FINDERS, acting as the reveal (39A: [With 41-Across, TV search performers…and an alternate puzzle title]).

For some reason, I had a rougher time of it in solving this offering, and it started when I put in “rahs” instead of YAYS, something that definitely did not allow me to see the “history” part of the first theme entry until I finally got rid of “rahs” much, much later (12D: [Pep rally cries]). I’m also very sheepish to admit that today was the first time I had ever heard of the terminology of FULL SUN (7D: [Preference for light-loving flowers like pansies and mums]) to describe plants, let along partial sun/partial shade (just looked that up). Making “full sun” harder for me to parse was having to absolutely guess (correctly, thank goodness) on SABU (30A: [Single-named actor in “A Tiger Walks”]). Another blindspot for me was TRILLIN, though the crossings with that entry were more forgiving and I was more sure of myself that that was correct (43D: [“With All Disrespect” humorist Calvin]). I guess the same could be said for ATHOL in terms of getting that through crosses more than anything else (28D: [“Tsotsi” author Fugard]). All of those names that were unfamiliar with me, along with my other missteps in solving, made the grid play much harder for me. Curious to hear if those names/figures tripped you up a little bit as well, or did you just cut through those clues without too much of an issue.

“Sports will make you smarter” moment of the day: SNEAD (32D: [Golf legend Sam]) – How about this entry for some wonderful timing?!?!? On Sunday, Tiger Woods won his first PGA Tour event in five years, winning by two strokes at the Tour Championship at the East Lake Golf Club in Atlanta to win his 80th career tournament on the PGA Tour. Those 80 wins are the second-most tournament wins in PGA Tour history, with Tiger only trailing………………..Sam SNEAD, who won 82 tournaments. Interestingly enough, one of Slammin’ Sammy’s wins came on the LPGA Tour. Yes, really. In the 1962 Royal Poinciana Invitational in Palm Beach, Fla., an LPGA event that was also open to select male golfers, Snead, the only man in the field of 15 golfers, won the tournament by five strokes over Mickey Wright and became the first (and only) man to win a tournament on the LPGA Tour.

Thank you very much for the time, everyone! Have a great rest of your Tuesday and, as always, keep solving!!

For me, this puzzle was just right! 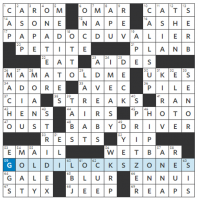 What a lovely, straightforward idea executed wonderfully! We have the full cast of characters from Robert Southey’s “Goldilocks and the Three Bears” represented in great, gettable themers. I have to imagine that GOLDILOCKS ZONES was the seed for this puzzle’s theme – how could you pass that up? The only surprise was that Peter Gordon didn’t sneak a word like BEAR somewhere into the fill. That’d have been a nice Easter egg! 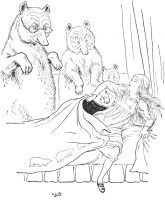 GOLDILOCKS and the Three Bears

The grid was super clean, as one would expect from the constructor, and the grid even comes close to featuring every letter in the alphabet at least once – only pesky F and Q are missing! All in all, a smooth solve that was well below my average time for a Tuesday WSJ puzzle.

#includemorewomen: Aside from palindromic ANNA, nameless SIS, and clued Mrs. Peacock, the only women in the grid are the stars of the show: MAMA Bear and GOLDILOCKS. The lack of additional female representation in the puzzle might be the only bit of the porridge that’s too cold for me. 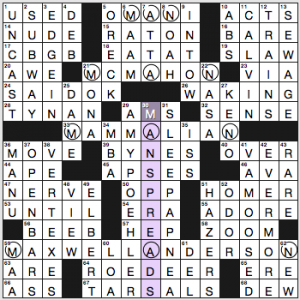 The topic of the day is manspreading, or a dude sitting with his knees spread wide and thereby encroaching on the personal space of the people sitting to either side. 30d. [Crowds one’s seatmates, in a way … or a hint to the circled letters] clues MANSPREAD, 2d/10d is the cross-referenced SUBWAY / TRAINS (though manspreading also happens on the bus, on sofas, on benches), and the circled letters take a MAN in 5a OMANI and “spread” it within the wider MCMAHON, MAMMALIAN, and MAXWELL ANDERSON as a visual riff on the manspreading concept.

I like the idea of a manspreading crossword theme (other than, you know, the crossword-constructor manspreading in which a chap submits so damn many mediocre puzzles that eventually some of them get accepted, leaving a little less room for crosswords by women), but I’m not crazy about this grid. AMY POEHLER, VAMOOSED, and OPEN BARS are great, but there’s plenty of “What are you doing in a Tuesday puzzle?” fill. Starting with OMANI, but continuing through RAT ON (“rat out” feels more common), the overused-in-crosswords EAT AT, the who-uses-this-outside-of-crosswords MAA (sorry, Lise!), contrived SAID OK, Eurasian animal ROE DEER, and perhaps-not-household-names TYNAN BYNES ELBERT ORECK and MAXWELL ANDERSON. 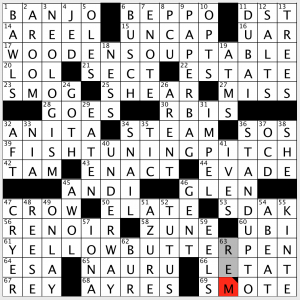 The flavortext says to “check your place setting.” We have here a theme based on the silverware you find at a typical table setting, each of which is mentioned in the clue:

We have three words in each case that can precede the utensil in the clue, and a punny clue to top it off. I laughed a little on this one, which is the whole point, isn’t it? I did mess up one square, where you see the cursor, since I thought the group in question was REO not REM! Oh well, I am not perfect! We definitely have some typical Jonesin’ pop culture trivia in this one, which also adds to the enjoyment level. A solid 4.5 stars from me this week. 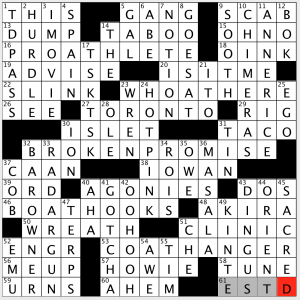 C.C is back on Tuesday with a simple theme that still took me a second to figure out! Even with a blunt revealer at 32A!

I highlighted the hidden word OATH in the answers above, since that is the “promise” that is “broken” across two words in each themer. Very smoothly done. But I would expect nothing less from C.C.! 4.4 stars this Tuesday.