Two roads diverged in a crossword grid… but no worries. You can travel both. 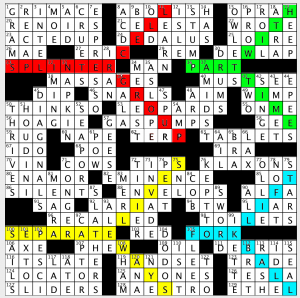 THEME: Split Ends. Two different phrases that begin by sharing a synonym for the word “split” end by taking two different diagonal paths (the visual in the solution grid is a way better explanation).

On the outset, it may seem as though there’s not a helluva lot of theme material here (after all, Evan’s grid are often jam-packed with theme answers. I think last week’s had something like 103 of them in there…), but there’s actually quite a bit of real estate occupied by the theme in this grid. I’ve tried once- and very unsuccessfully- to build a 21x grid where theme answers didn’t follow a traditional vertical/horizontal path. It’s tough. It’s another layer of constraint that the solver may not fully appreciate (note the nifty top/bottom symmetry used to accommodate the answers). And Evan (as usual) pulls this off deftly with minimal crud in the grid.

Also, I really like when a theme helps me to figure out tough fill. Clues seemed a bit harder than usual, but after sussing out the conceit, it provided helpful little nuggets to determine fill like CELESTA, DEDALUS, EMINENCE, and ENVELOPS (just to name a few spots where I stumbled).

Thoroughly enjoyed this puzzle. Right amount of toughness with a solid and unique concept. 4.5 stars from me.

P.S. A music video so bad that it’s great: 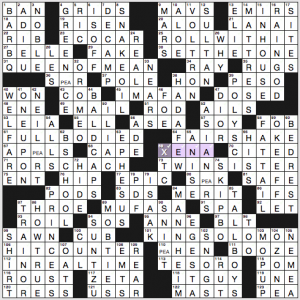 The theme entries are phrases starting with standard mattress sizes, with a {PEA} rebus square below each “mattress” and the name of a princess above it. 14d. [Item lain upon four times in this puzzle] clues MATTRESS, 82d. [Any of the four people disturbed in this puzzle] clues PRINCESS, and the final revealer is 123a. [Item that disturbs sleep four times in this puzzle], PEA. So we’ve got Disney princess BELLE atop a QUEEN (OF MEAN) bed atop a {PEA}. Princess/General LEIA lies on the FULL (BODIED) mattress with its {PEA}. XENA the Warrior Princess lies on the TWIN (SISTER) and {PEA}. And last, British royal Princess ANNE is on a KING (SOLOMON) bed atop a {PEA}. The fairy tale “The Princess and Pea” is what’s at the heart of the theme.

That fairy tale was ruined for me this week, when I read a poem by Laura Passin called “Charming,” originally published last year in a publication called The Fem. I’m still, as the young folks say, shook. I doubt that Natan had seen this poem prior to writing his puzzle—he may well have made the puzzle before the poem was ever published. It’s a neat theme, executed elegantly, but the fairy tale that inspired it is now creeping me out.

Grid’s got some lovely fill, though. ROLL WITH IT, SET THE TONE, FAIR SHAKE, HIT COUNTER, IN REAL TIME, MOB TIES, TALLBOYS, B-SCHOOL, SNAKE OIL, GREEN{PEA}CE, ASIAN {PEA}RS, and RAIN GOD are all excellent entries. They help be forget BAR-B-Q, which I happen to hate. If you can’t accept BBQ, then just spell out barbecue, for crying out loud.

Did not know: 11d. [1980s cartoon robot], VOLTRON. Now, Voltorb, the round pink electrified Pokémon, sure. But not VOLTRON.

59d. [Georgia, in the art world] clues O’KEEFFE, and I just encountered a new-to-me O’Keeffe painting at the Art Institute of Chicago this week. She didn’t spend much time up amid the greenery of Quebec’s Gaspé Peninsula, but she was there long enough to paint this:

I had no idea what the theme was until I filled in the revealer. 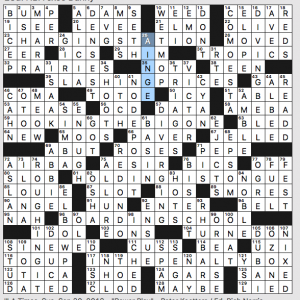 And, finally, the revealer: 117a [Temporarily disqualified due to an infraction that begins any of seven answers to the starred clues] is IN THE PENALTY BOX. So CHARGING, DIVING, SLASHING, HOOKING, ROUGHING, HOLDING, and BOARDING are all infractions in ice hockey. This is not a sport I follow, so my consternation is no surprise.

As I noted, one or two of the theme answers feel roll-your-ownish to me, and since I’m not a hockey fan (and it’s not hockey season – is it?) the whole thing left me, well, cold.

What I didn’t know before I did this puzzle: that Danny AINGE is an NBA exec. I knew he was a player. 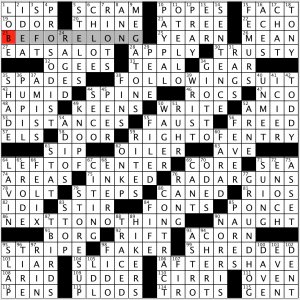 Where could it be? It could be short review, since I’m under the weather.