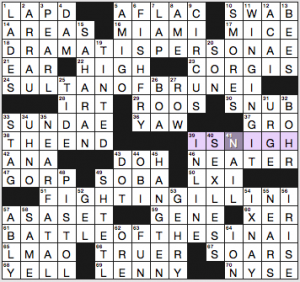 It’s Amy covering for Jenni, who’s off for a holiday. The theme revealer is split in the middle: THE END / IS NIGH. The other four theme answers end with the “nigh” sound,” but spelled four different ways: the Latin DRAMATIS PERSONAE, the SULTAN OF BRUNEI, the FIGHTING ILLINI (I’d have capitalized the first L in “land of Lincoln,” as Land of Lincoln is Illinois’s slogan), and BATTLE OF THE SINAI (not a military engagement I think I’d heard of). May I just say that it’s weird that SINAI has two long-I sounds spelled two different ways? I don’t know how it comes out in Hebrew.

There is a blatant grid dupe, 55d NEARS and 35d NEAR-FATAL. This is the same damn word appearing twice in the same grid! Plural NEAPS is ugly, but it could cross SOAPS and get rid of that dupe. It feels so, so careless to have this 55d and 35d overlap.

Probably this is too much thematic material for an easy Monday grid. Two 16s, two 14s, and the 6/6—that’s 72 theme squares. And so it comes to pass that your crossword beginners are expected to know Claudio ARRAU; 8d. [Soul: Fr.], AME; GORP; awkward phrase AS A SET; Japanese OBI crossing Japanese SOBA; and sort-of-contrived UH NO. A dear friend of mine and her 14-year-old twins have recently waded into solving the NYT crossword, and they hit the skids by the time the Wednesday puzzle rolls around. Are all of these entries perfectly fair and reasonable for a beginning solver? I would say no.

I think this one is a regionalism: 6d. [Popular Friday feast], FISH FRY. This wasn’t a term I’ve ever encountered in Chicagoland, or in small-town Minnesota during my college years. I know it only because I married a cheesehead, and the Milwaukee area, perhaps all of Wisconsin, is big on Friday-night FISH FRY (not sure if this was a Catholic thing, or if the Lutherans et al were also big on no-red-meat Fridays). I recall going to an Italian restaurant that shunted most of the pasta, etc., to the side on the Friday menu, because it was fish fry day. Do those of you out east, west, and south and in non-Wisconsin parts of the Midwest know of FISH FRY as an established thing, or is it exotica?

As many times as I’ve typed Zhouqin Burnikel’s name in these pages, I’ve just now realized that her first name is the only example I can think of that has the “u” and the “q” in the wrong order. Can you think of any others?

Anyhoo, she brings us a nice Monday grid with synonyms of the word “scam.” The central revealer, SCAM ALERT, is clued [Warning to consumers, or what might be triggered by the starred answers]. 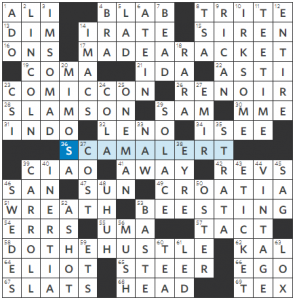 Simple theme, but clean and fun, despite my quibble with “sting.”

The rest of the grid is loaded with fun, too: TEE TIME, CROATIA, VINTAGE, LINCOLN, “I’M SO MAD,” Lewis CARROLL, INERTIA, etc. SOLACE as a verb seems weird; why not clue it as the more common noun? SLAMS ON also gets a frowny face from me.

But for the most part, this was smooth and clean. An easy, breezy way to get the week started.

You know I’m gonna do it, so don’t fight it. I challenge you to look away, but it’s irresistible. You can’t not watch it, especially those pants at 0:53 (and again later on, since the video repeats itself after so long). You must DO THE HUSTLE!

Z is for Zhouqin (aka C. C.) and T is for terrific! It’s always a great Monday when there’s a C. C. Burnikel puzzle cued up for us. 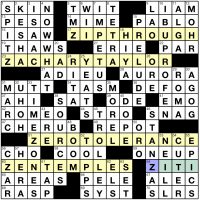 17A: ZIP THROUGH [Complete quickly, as a test] – Like I was able to do with this puzzle (though not as fast as some crossword solving beasts I know!)
23A: ZACHARY TAYLOR [Predecessor to Millard Fillmore] – Sadly for this 90s kid, not Jonathan Taylor Thomas.
51A: ZERO TOLERANCE [Strict rule-enforcement policy] – An approach demonstrated to actually make things worse and less equitable for people of color.
60A: ZEN TEMPLES [Buddhist meditation sites] – I think we could all use some meditation these days!
64A: ZITI [Tubular pasta … and a phonetic hint to 17-, 23-, 51-, and 60-Across]

A smooth Monday puzzle. I really enjoyed NOW WHAT, TIME ZONES, and IBUPROFEN. The only crud was TASM and SLRS, which is impressive considering how tricky it might be to work around all those Zs. In fact, I was impressed how the constructor used those Zs in the crossings: SPITZ TMZ TIME ZONES and CZAR. It can’t get much CUTER than that!

#includemorewomen: Aside from KESHA (no $ in her name anymore) and [Beatles’ meter maid] RITA, we have the lovely queer comedian of color, Margaret CHO.

CHO has fought critics and Hollywood’s image expectations to become a role model and icon for many in the LGBTQ+ and Asian-American communities. While it wasn’t always well-received, I remember being impacted by her groundbreaking 90s sitcom, All-American Girl – a show based on her family, comedy, and experiences. It was short-lived, but impactful! 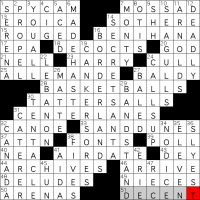 hello! joon here with a review of this week’s new yorker themeless by patrick berry. i’ve recently taken to doing a lot of themeless puzzles with only the down clues, and that’s how i tackled this one. but enough about me.

good lord, this is a great grid. wiiiiide open, only 62 words, and yet somehow still as junk-free as you would expect from a patrick berry grid. let’s hit some of the highlights:

glancing over some of the across clues i didn’t look at while solving, these jumped out at me:

that’s all i’ve got this week. this puzzle was 5 stars—it could be my favorite new yorker puzzle yet. 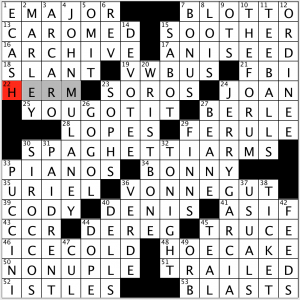 Five quick things today for you, my listeners; this’ll be a short post: