With a title like that, you just know that there’s going to be something about reading things backwards. Hey, listeners, let’s see if we can forward-engineer this meta gimmick! For starters, we have some goofy themer entries: 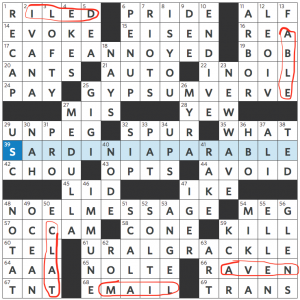 Interesting — right there at the top of the grid is [1a: Bent out of shape]: RILED — which also means annoyed. And if I “reverse engineer” RILED I get DELI – R … hmmm, a DELI is a kind of “casual restaurant.” I wonder if I looked for other synonyms for the second words in the goofy themers, could I find other synonyms for the first words? Or maybe words that could also go with those clues?

We have, in themer order:

I solve a whole lot of Matt’s puzzles — I’m a MGWCC addict, and I’ve now been covering the WSJ contest for a few months. I’ve noticed that the “refer to other entries in the grid that the clues could connect to, and then do something with them” gimmick is one he uses fairly often — so much so that that’s one of my immediate “extraction techniques” when I’m solving a Gaffney meta. What did you think? Slip inside the eye of your mind — don’t you know you might find a better place to play?