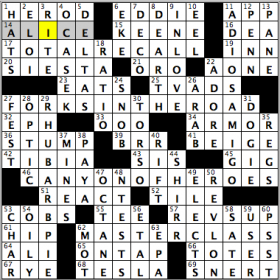 Good day, everyone! I hope you are all doing well and that start of fall is treating you well also. This puzzle is all about grand entrances, as each of the four theme entries are multiple-word answers in which the first word is also a word that can also come after the word “grand” to make a common phrase. Well, ain’t life grand?!? On this day, and in this space, it totally is!

Probably the only real hold up in solving was not being 100 percent sure of the terminology of DOGIE, as well as which specific baby animal is called such (31D: [Herd youngster]). Though, as I typed that last sentence, I wondered if that old country-western “get along little dogie” song is in reference to that. (Researching at the moment before continuing this blog…Yup, it is!!) It’s funny how you hear of something a number of times, especially when younger, but don’t think twice of it until much, much later, and “dogie” is definitely that for me right now! I’m pretty sure I heard that song first in a Looney Tunes cartoon that featured Foghorn Leghorn. Now I’ll be looking for that on YouTube and be sucked into looking at cartoons online for about two hours.

As I said, other than that, no trip-ups, and, as I was solving, there was not any entry that really stood out one way or another – maybe outside of the fact that I’ve yet to try RHUBARB PIE (29D: [Tart, fruity dessert]). Speaking of never trying foods, at least making them in a certain way, SHIRRed eggs have never looked appealing, probably because I don’t put too much on my eggs other than shredded cheese and definitely do not envision putting cream in them before cooking (44D: [One way to cook eggs]). Maybe one of you has a real good shirred egg recipe that you can share!

“Sports will make you smarter” moment of the day: CANYON OF HEROES (46A: [Downtown location of New York City’s ticker tape parades]) – Over 200 parades have taken place on the route called the Canyon of Heroes, as each parade goes down Broadway on its way to City Hall. (The parade route stars in Battery Park). Though most of the parades have honored returning veterans and achievements in different fields, probably most people in the NYC area remember the parades held for NYC-area sports champions. Nine of the New York Yankees’ 27 championship teams have paraded down the Canyon of Heroes. The last sports team to be honored on the Canyon of Heroes was the 2015 United States Women’s National Soccer Team that won the 2015 FIFA Women’s World Cup, the first women’s team to be honored with a procession along Broadway.

Thank you very much for your attention, everyone! Have a great rest of your Tuesday and, as always, keep solving!!

Pull up a chair, Kentucky! You too, New York! It’s time to unite as a country: 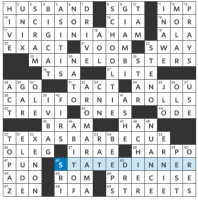 I like the cute revealer, which ties the states together to a larger theme, but STATE DINNER usually refers to a meal between leaders of two nation states, right? The U.S. has STATE DINNERs with leaders from other countries, but two U.S. states wouldn’t have one between them. I also wasn’t pumped that two of the themers were plural and two were singular as a way to fit similar letter counts, especially when there are many other state-named regional foods that could have worked as themers. I appreciate that there were contributions from four different regions of the country (though Texans might argue that they are not the South and vice versa), but the theme didn’t feel tight in that there were so many other possible themers – it leaves the solver wondering why these were chosen and others weren’t. At the very least, the CALIFORNIA ROLLS can be filled with imitation crab for our vegetarian friends! :)

Loved the clue for 1A, which allows for the former bachelor, now HUSBAND to be of any sexuality. No heteronormativity implied in the clue! (Shout out to my husband of 3+ years, Ben.) I also enjoyed AROMARAMA, INCISOR/MOLAR, and XENON. The phrase [“Va-va-___”] VOOM, on the other hand, felt icky to me and connotes men objectifying women. Blerg.

#includemorewomen: So … I count 10 men in the grid/clues vs. only two specific women and one literal “the Women”: HUSBAND, BRAM, HAN, OLEG, HARPO, GIAMBI, ASHE, DRT, ERNIE, and Wolf Blitzer vs. JLO, Gina Haspel, and “the Women” from “DR T & The Women”. (I’m not going to count “Va-va-VOOM“, even though that should subtract one from the women’s column.)

That is less than stellar and, at least in my casual counting over the years, reflects a tendency in puzzles to feature and clue toward men vs. not men. Maybe it’s what crossword constructors favor, maybe it’s what is loaded into constructors’ word lists? Whatever the cause, this isn’t great. Even if you had the same grid, you could at the very least clue HARPO as Oprah’s company and clue some of the other fill via women related to them. When women don’t see themselves reflected, they notice – and it matters.

The theme answers are all wacky phrases composed (!) of the names of musicals, with the years each musical debuted in brackets. 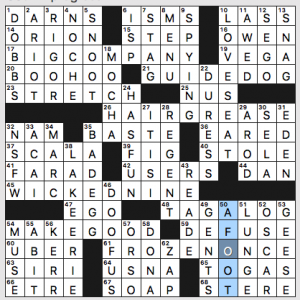 I love this theme, especially without a revealer. I love musicals and have heard of all of these, although I haven’t seen them all. I never realized there were so many musicals with one-word titles.

What I didn’t know before I did this puzzle: that “boondocks” comes to us from TAGALOG.

I suspect this puzzle will generate a bimodal distribution – love it or hate it. I love it. 4.5 stars from me.

One of my favorite TV moments is this dance, set to a song from “Once.” 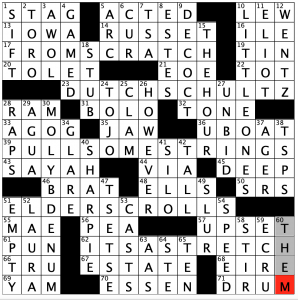 I at first thought the theme had more scope than it did. Let’s call the theme “7-letter words that start with S with only one vowel smack dab in the middle.” Each theme entry has one:

The first two themers also have a word with one vowel, so I at first thought that the theme answers used exclusively words with one vowel. That is not the case, but it is except for only two words! (SOME and ELDER have two). But even if there was only one vowel in each word, how would you title that? This works just fine, although it does seem like there is a slightly better title out there somewhere. Still a fun puzzle, and are there any more instances of a seven letter word with one vowel in the middle? 4.3 stars today. 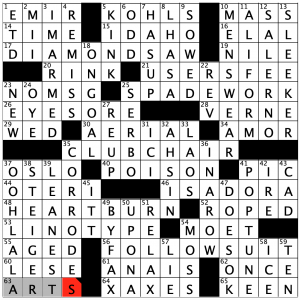 To put it plainly, each theme answer is a phrase that starts with a card suit and ends with another word that “follows suit.” Cut the deck! What game are you in the mood for now? Bridge? Euchre? Gin? Spades? Hearts? I haven’t played cards in years!! Maybe I am just getting old, but I suppose I have to teach my 6 year old at least how to play War! I will work on that this week! 4.4 stars for this joker-less puzzle!

See everyone on Saturday!