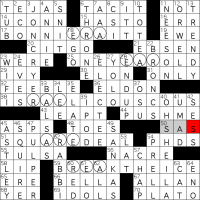 hello and welcome to episode #539 of matt gaffney’s weekly crossword contest, “The Sixth Mix”. for this week 4 puzzle, matt gives us the following instructions: There are 11 theme clues/entries in this puzzle, five of which have asterisks. Which of the remaining six is the odd one out? (You can submit either the clue number or its entry.) okay. well, what are the theme clues? the five *ed ones are easy, as not only are they *ed, they also occupy the five longest spaces in the grid:

so, what’s the theme? i don’t know that i would have ever noticed it if not for the title, which suggests six different arrangements of something. there are six ways to permute three items, such as the letters E, A, and R, which appear together in each of those answers. at this point it certainly caught my eye that ONE YEAR OLD also contains not only EAR but also EYE (!), but that was already the answer to week 1 this month.

however, the EAR is certainly relevant, as each of the five answers above contains one of the arrangements of EAR (in bold, and also circled in the screenshot). the only one missing is AER.

so far, so good. but there are 11 theme answers, matt says. what are the other six? well, logically, they ought to correspond to all six of these orderings. and the odd one out is the one associated with AER, since it doesn’t have a *ed partner.

once i started thinking along these lines, it didn’t take that long to find what i was looking for:

so that’s it. the answer is 50-across or SAS. i submitted 50-across, but clearly the instructions allow for either one. i have a sinking feeling that some people will have submitted AER, and i feel like that shouldn’t be an acceptable answer, because not only is it not a grid entry, it also doesn’t demonstrate any evidence that a solver found the other six theme clues. but i can certainly imagine a solver fully grokking the meta mechanism and just submitting AER due to a less-than-careful reading of the instructions. i hope that wasn’t you!

having said that—this was a very cool meta. i have only two criticisms of it:

let’s take a look at the fill:

that’s all i’ve got. cheers to matt for another month of great metas! how’d you all like this one?