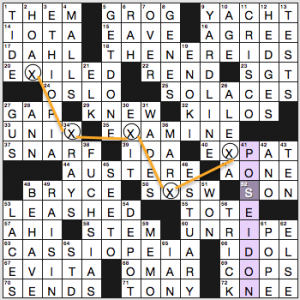 Today’s puzzle played like an easier-than-Wednesday, I thought, even though the theme set was entirely unfamiliar to me. I mean, I’ve heard of the themers individually, but I didn’t know the mythological tale that includes them all.

Neat theme. But now I want to say “Cathiopeia.”

Three more things before I turn in: 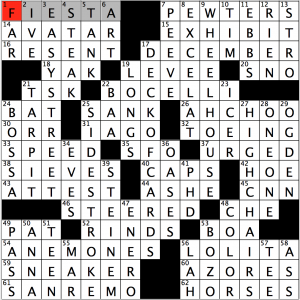 A vertical theme today: in EASY STREET, WHEELHOUSE, DECK OF CARDS, and SIDESTROKE, the first bits are all words that can go before “chair” – so, as they’re oriented in the puzzle, we can call them HIGH CHAIRS.

It’s hard to fill a crossword grid with all well-known, fair-game words and phrases, and harder still when the lengths of the theme answers (in this case the 11-letter DECK OF CARDS on the middle column) demand a grid pattern that’s less segmented than your average. The person who wrote this puzzle knocked it out of the park – there’s plenty of fun stuff (FIESTA, AVATAR, EXHIBIT, DECEMBER, SNEAKER, AZORES, STEINEM, plus the OGDEN clue – [Nash who wrote “Parsley / Is gharsley”]) and nothing at all I found gripeworthy. Am I Jennifer Nutt? Because this puzzle gets 5 stars from me! 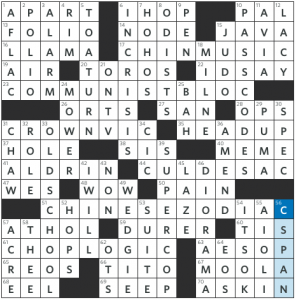 For me, I would much rather see this grid without those first and last themers, or at least, have them replaced with a single new central theme answer. Having never heard those phrases made those entries really difficult to parse. Of course, your mileage may vary.

But six theme answers plus a revealer puts a lot of stress on the grid, and so we get some out-of-left-field entries like DURER, [Engraver Albrecht], ATHOL [“My Children! My Africa!” playwright Fugard], ORTS [Little nibbles], and TO A TURN [Perfectly]. This last one was new to me as well and was especially frustrating because the clue seemed to want TO A TEE.

Oh, and if your title is “Airing the House,” you probably shouldn’t have AIR in your grid.

So I was just not on the right wavelength, because I mostly felt annoyed during the solve. At first, I thought the cross-referencing of PEN and PAL and SPEC and OPS was thematic, so I was willing to go along with it. When I realized they weren’t, I was just irked.

Further, the clues didn’t help matters. There were a few trivia clues (like [Mount Merapi’s island] for JAVA), but thankfully not too many. But SPEC / OPS clued as [With 28-Across, some CIA business] got to me. No one says “SPEC OPS.” My brother, while not in Special Ops, worked closely with Special Ops people, and I’ve never heard him say anything but “Special Ops.” And speaking of things I never heard while I was in the military: CIC [POTUS, militarily]. CINC is the far more common way to refer to the Commander In Chief, at least in my experience. And further, CIC fits the theme of the grid, but it’s not called out as such.

There are some brights spots here though: OLD SCHOOL, SUPERCOP, DIORAMA, and WEDGIE are all really fun. Interesting how all of those are in the bottom half of the grid. And the clue [Second person in the Bible] is wonderfully misleading for THEE.

I’m sure many people were fine with this grid, but for me, too many negatives detracted from the positives here. With two fewer themers, there’d be more room for the grid to breathe. 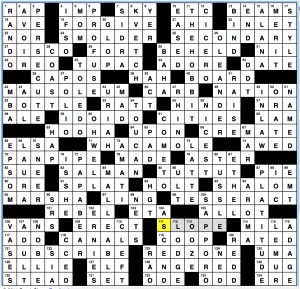 The theme on Aimee Lucido’s puzzle from the AV Club today felt a smidge underclued for me – which is a shame, since it’s a massive grid, there’s a LOT of theme going on, and it’s very good once you connect all the dots.

First off, there’s one set of clues that hint at dropping something to get another word:

Parsing this out further, you could answer the second part of each of these clues by dropping a letter: SMOLDER becomes SOLDER, BOARD becomes BARD, SPLAT becomes SPAT, and SLOPE becomes SLOP.  Those extra letters end up spelling MOLE.

There’s also a set of clues that revolve around the answer at 71A:

This had me stuck for a little bit – adding a letter didn’t seem to work with these.  Then I looked at 71A:

Parsing this as instructions to “whack” a “M-O-L-E” (the leftovers from the first set of clues) into the second set of clues (which are all conveniently below the locations of those letters), it all clicks into place.  DISCO and FORT combine to become DISCOMFORT when the M from SMOLDER is “whacked” down, which makes the second part of the clue for 27A, “tenderness”, make sense.  Applying this same process to the other theme answer sets, CARB and NATION become CARBONATION (“champagne bubbles”) with the O from BOARD, MARSHA and LING become MARSHALLING (“organizing, as soldiers”) with the L from SPLAT, and COOP and RATED become COOPERATED (“worked together”) with the E from SLOPE.

There’s some masterful construction here (and pretty decent fill, all constraints considered) that took just a little more of a mental jump than expected for me to connect today.