Fireball is a contest puzzle this week. Tune in on Sunday evening for Laura’s write-up! 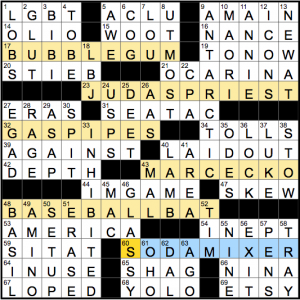 It’s Fiend’s own Joon Pahk! (Full disclosure: Joon’s my boss over at the wonderful Outside the Box Puzzles, where he makes excellent weekly Rows Garden puzzles, plus there’s a variety crossword every other week!) It’s been over three years since Joon’s last NYT puzzle, but he’s back and serving up a tall, fizzy glass of puzzle.

The revealer is 60a, SODA MIXER [Ingredient in some cocktails … or a hint to the last words in 17-, 23-, 32-, 43- and 48-Across]. It took me a minute or so after finishing to realize that the last words of the five theme answers are anagrams of soda brands:

Simple enough. A ton of theme in this one — getting 6 theme entries in a 15×15 grid is impressive, and the fill was pretty smooth despite the constraints. Some nice entries like I’M GAME, LAID OUT, OCARINA (which I suspect may have originally been clued via the classic Zelda game Ocarina of Time), and SEATAC.

My time on this one suggests that the difficulty was somewhere in the limbo between too-hard-for-Wednesday and too-easy-for-Thursday. The fact that the theme isn’t made explicit by circled letters / an explicit explanation in the revealer clue / any other hand-holding measure makes this a little tougher than a normal Wednesday, but there’s none of the tricksy-ness or gimmickiness that one has come to expect from NYT Thursday puzzles. I’ve found this week’s puzzles easier than usual, so in the sense that this was harder than Wednesday’s puzzle, this one is properly placed on Thursday.

A refreshing puzzle that really hit the spot. Until next time! 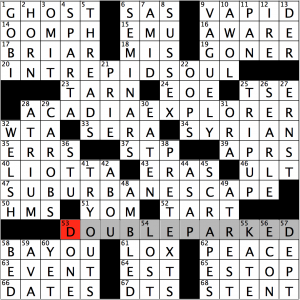 Big congrats to Brandes & Jones for their LAT debut! Hope to see many more from this duo.

The clue for the theme-explaining answer is so specific and relatable that I wonder if the puzzle was inspired by true events. [Like a delivery truck blocking your car, maybe] is DOUBLE-PARKED, and sure enough, three Frankenstein phrases in the puzzle are formed by combining names of cars:

I was only familiar with one out of each pair of car names, so I had a tough time figuring out the phrases – I hope you fared better.

Here’s a list of answers from this puzzle that would have baffled me when I was starting out as a solver: SAS, TARN, EOE, STP, ESTOP, DTS, PRIE, ABOU, SEARLE. Even now, I haven’t run into most of those outside of crosswords, so I’m going to say this grid could have used a bit more polish (though I’m open to the alternative explanation: that I’m ignorant as heck and need to read more). I did like seeing SYRIAN, BAYOU, WELSH, TRYOUTS, PRETEXTS, VAGUELY, and TRIP UP.

Thoroughly modern cluing at 1-Across: [Abruptly end a relationship with by ignoring texts, calls and such] = GHOST. The excellent third season of Insecure, which concluded this past Sunday, featured a ghosting storyline that got a lot of people talking.

22-Down: [Unwelcome word from a barber] = OOPS. Nice evocative clue – that’s some nightmare fuel right there! Gotta do your research.

That’s all I got for today. Thanks to the constructors and the editing team for the challenge. Safe driving!

Now this is more like it. I feel like we’ve been in a slump lately with WSJ puzzles. But today there’s solid wordplay on display in this grid where we have Rs going on walkabout (hence the title, “R Ambling”). Specifically, we have two-word phrases in which the lone R changes teams and finds a home in the other word. Clues are wackified accordingly. Oh yeah, there’s a revealer at 69a (MOVER, [Relocation pro, and a hint for six of this puzzle’s answers]), but it seemed superfluous. 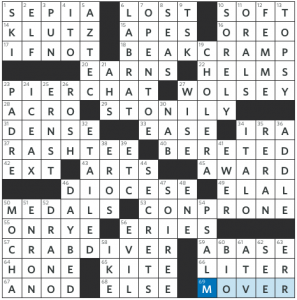 Despite the weaker two in the middle, this was a very enjoyable theme handled deftly and with humor.

And the fill is strong to boot. I like OPEN TOE (sandals), CHOLERA (as an entry, not as an disease), DAY BED, LAB RAT, SECRETS, and DIOCESE. Oh, I also liked that I was able to pull WOLSEY [Early adviser to Henry VIII] out of my head with few crossings. Cluing seemed to strike that balance between tricky and trivia to make the whole enterprise fun and worthwhile.

There are a few things that I could do without though, like ITALO, ABASE, ICE AX, ENRON, and ETAILED. Those are all overly used in crosswords, but that’s because they’re so durned useful to a constructor. Oh well.

Still and all, two thumbs up for this fun finish to the regular puzzle week. Until next time!