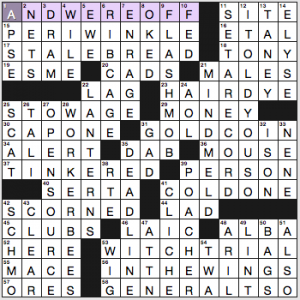 Whoosh! This was mighty quick for a Friday puzzle. I guess we’re having Easy Week now?

Robyn’s grid features 10 answers that are 10 letters long, and they’re all pretty zippy! Nary a roll-your-own word jammed with affixes. “AND WERE OFF!” is solid. PERIWINKLE was my favorite Crayola hue as a kid, and my front yard’s filled with vinca ground cover. STALE BREAD has its uses, IN THE WINGS is a solid idiom, and GENERAL TSO has been waiting to see his rank included in the grid. SET A RECORD, fine. “I TOLD YOU SO,” lively. OPEN-SOURCE, good but the clue seems off—shouldn’t that be [Like code anyone can use] rather than [Like a code…]? WORKER BEES work literally and as an idiom for employees. And WITCH TRIAL evokes the Salem witch hunt, in which men who felt threatened by women railroaded those women, and this makes “witch hunt” a truly inapt phrase to apply to #MeToo investigations.

In conclusion, MIND-MELD! That’s a great entry, too. Four stars from me.

Nifty environmental theme today in which we have to deal with RISING SEA LEVELS (42a, [Result of polar ice melt graphically shown by the second part of six two-part puzzle answers]).

I have to say though, that for the most part, I ignored the theme during the solve. I got the rough outlines of it, and I recognized that there were four rows where each entry had a parenthetical number after the clue. But beyond that, I didn’t feel the need to fully grok the theme to solve the puzzle. Once I did, post-solve, I thought it was pretty cool.

Like I said, I thought this was pretty nifty and a nice change of pace from the typical theme. Even though I didn’t recognize some of the sea names, I’m still impressed that Paul managed to stack so many entries atop each other and still come out with decent fill. 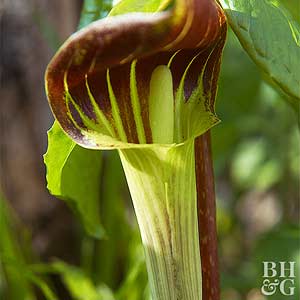 A jack-in-the-pulpit which is a pretty apt name. Looks like a pitcher plant, but it’s not carnivorous. Still, a fascinating adaptation (click to read more).

That said, it’s not perfect. There’s ARUM [Jack-in-the-pulpit family] (which I had to look up to realize we’re talking about plants), APIA [Samoa’s capital], ANIL [Deep blue], and most jarring of all, HENNAING [Applying a temporary tattoo]. Not pretty, but still gettable with the crosses.

In the plus column, there’s LIE-ABEDS [Reluctant risers] (if all goes according to plan, this will describe me this weekend), PHAROS [Seven Wonders lighthouse] (of Alexandria), HOT ROD, and MIOSIS [Constriction of the eye’s pupil] (though I thought it was spelled  “myosis”).

In the end, the goods cancel out the bads, and with a clever theme, we’re left with a puzzle in the win column. 3.8 stars from me. 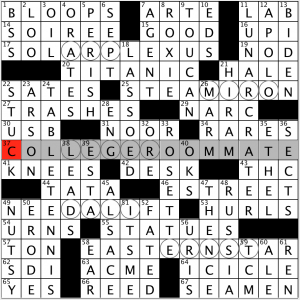 We get a lesson in modern art today! The names of five artists are hidden in two-word phrases — in fact, they cross over from one word to another. 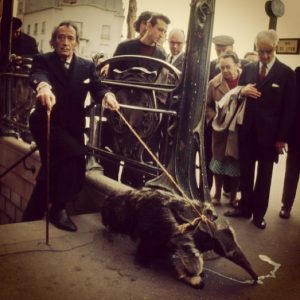 These were great finds, and the fact that all of the encrypted artists were modernists and/orsurrealists was cool too! I’m on record in this space as favoring art-based themes (indeed, my first published puzzle was all about artist name puns), so perhaps I was predisposed to like this one. I would’ve liked to have seen some women artists included (#includemorewomen), though I can imagine finding a two-word phrase to hide Meret OPPENHEIM might’ve been a challenge.

What did you learn today, Laura? Three things, in addition to the Masonic thing: