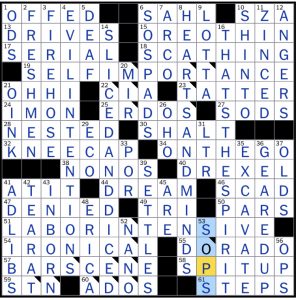 Ben here, filling in for Amy with what appears to be a debut for Lewis Dean Hyatt in the NYT!  That’s not a name I recognized from past solving and it didn’t pop up already when I was tagging this post.  Congrats, Lewis!

Let’s take a look at what’s up for grabs in this Saturday NYT Themeless:

I would have loved a few more bits of contemporary fill – Mort SAHL crossing ARCO tripped me for a while – and there were a few word-ish things like ZINCED and the aforementioned IRONICAL that felt iffy for me, but all in all a decent Saturday debut.  Well done, Lewis! 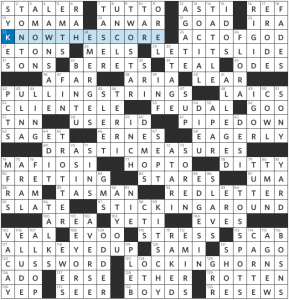 This was pretty fun. I like the consistency in that each entry shows the respective orchestra members dealing with the stress in their own particular way. The phrases are all perfectly apt, though FRETTING is the stand-out for not actually being a phrase. But I guess we can LET IT SLIDE.

The only downside for me is that I wanted a conclusion to the story. I solved from the top down so I uncovered each entry in order, and I felt like the tension was building. I wanted some kind of payoff, like a punchline or at least some resolution to the conundrum they were in.

An alternative might have looked like this. With the central entry describing the “governing board” stepping in, the natural result would be that the bottom entries would show the results of their intervention. I would move some of the entries around, but after the tension builds in the top half and the governing board institutes DRASTIC MEASURES, the bottom half might look like this: […they got the guitarist to stop FRETTING], […they got the violinist to stop PULLING STRINGS], […they got the trombonists to LET IT SLIDE], […and they got the brass section to stop LOCKING HORNS]. Or come up with a general conclusion, like […and they got everyone to COMPARE NOTES], or something. I like this idea of crossword puzzle as a story medium.

Anyhoo, this was still fun as it is. Plus there are some goodies in the fill. I like RED LETTER, CLIENTELE, ACT OF GOD, CUSS WORD, KITSCHY, and VACAY. TOSSPOTS [Juicers] is British slang for heavy drinkers and is usually shortened to “tosser.” I don’t think I was aware of “juicer” having that meaning as well. I thought a juicer was a steroids user.

Contrasting the good fill are some real eyebrow-raisers: LAICS [Flock members], HOP TO [“Get moving!”] (don’t think I’ve ever seen this without a final “it”), SAMI [Lapland people] (this looks like pretty standard crosswordese, but for some reason, I don’t recall seeing it; maybe I’ve blocked it out), the Battle of BOYD’S Creek (thank goodness for crossings on this one), and LAWN SALE. Is this last one a regional term? I’ve only ever heard “yard sale,” “garage sale,” and “sidewalk sale.”

The final entry I’ll note is TROTTER [Harness race entrant]. This of course reminds me of the D.A. in the very funny My Cousin Vinny.

Overall, a pleasant Saturday grid. Definitely worth more than TWO STARs. I’ll say 3 and a quarter. 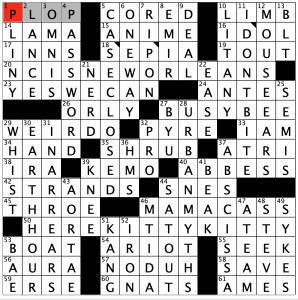 Our friend Gareth has the Saturday LAT challenger today! There are a couple of entries in here that I absolutely LOVED, and that will be the major theme of the words I highlight in the list below. And yes, I messed up a couple of answers, as you can see in the grid. Those were typos!! (!) One of these days I am going to get back into constructing, and perhaps you will see my byline someday! A solid 4.6 stars for this one! 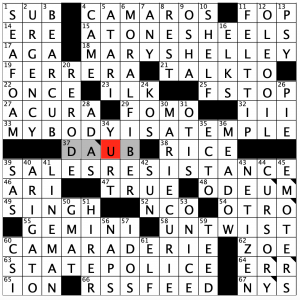 Slightly tougher than normal, but I think after years of blogging these I may be getting the hang of this! I could just be getting more comfortable with that uneasy feeling that you get when you are stuck; you know it will work out in the end. It just may take a few moments! But what used to frustrate me for 30-45 minutes now takes around 15-20 at most on typical Stumpers, which is satisfying. Just in time for my getting old and nearing the inevitable slowdown! 4.5 stars for another Brad Wilber gem.

That is all for this week’s Stumper. Enjoy your weekend!