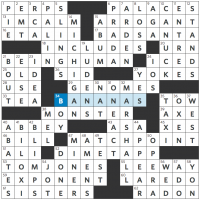 Let’s go to the movies! Mike Shenk challenges us to find a movie technique.

This was a metapuzzle where I went down any number of rabbit holes, eventually asked a solving-group buddy for a hint, and then only found the solution by talking it out with another solving buddy. Rabbit holes included:

Finally, I asked for help and was hinted to: 1) look only at the across themers; and 2) see how I could apply the title, Central Casting. This generated another rabbit hole, since I saw anagrams in the center of several of the themers: SAND, HUNG, CHOP, MOJO … but that just seemed silly. It took forever, but in a moment I finally saw it (with help from chatting it out via twitter DM): look for the central letters in each word, not in each title/entry as a whole:

Which add up to spell ANIMATION, which is indeed a movie technique.

One fill note: [15a: “Hallelujah, I’m ___”]: A BUM is the title of an early 20th-century hobo song by Harry McClintock, and gave the name to a 1933 movie starring Al Jolson. Carl Sandburg included it in The American Songbag (which Dan Zanes covered on Parades and Panoramas in 2004). The Freedom Riders adapted it as an activist anthem in the early 1960s, which was subsequently recorded by Pete Seeger (who was my dad’s camp counselor!).