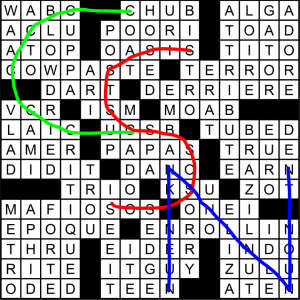 First thing you notice on this one is that it’s probably a grid-based meta, maybe a picture or something, since the longest entries are a quartet of 9-ers that didn’t feel like a theme set (BLOW-DRIED, ATTRIBUTE, CRITIQUED, BRAZIL NUT). But before grid-scanning let’s look at the two clues that provide a hint of where to go:

47a.[This month’s meta answer, for one], TRIO, and 41d. [“Apologies!” (or what you might say for not including an occasional additional band member in this puzzle)], SO SORRY!.

Now, this is a lot of information we’ve been given here, since it’s not super-common for a famous trio to have “an occasional additional band member,” especially since this wording strongly suggests that there’s exactly one occasional additional band member, not a core group of three with a few secondary players floating in and out over the years. So the obvious band that entered my mind was Crosby, Stills & Nash, with Neil Young the occasional fourth (when they went by CSNY instead of just CSN).

So CSN was going to be my Hail Mary if I couldn’t solve it, especially since some quick Googling didn’t turn up another such instance of a band with this specific (3+1, all bandmembers’ identities very clear) makeup. This turned out to be right, so I think Pete gave a bit too much away here; I think it would’ve been better to just clue SO SORRY in some other way unrelated to the theme to lessen the guessability factor. But there’s also another subtle piece of info in that clue: note the wording: “…for not including an additional band member in this puzzle.” So the other three band members are represented somewhere in the grid, he’s telling us.

It took me about 45-60 minutes to get this far; I’d gotten stuck in a few rabbit holes, like thinking the fourth band member would have the initials S.O. (from SO SORRY), and listing all the capitalized letters in the grid (from the title, “Large Print.”) But then I finally had the aforementioned realization, as the lack of long theme entries supported, that there were three band members hidden somewhere in the grid. Also supporting this hypothesis were some oddly drecky areas of the grid, like the upper-left and middle-left with WABC, ACTO, WAAC, CAMI, LAIC, and AMER in one section. So something was going on.

And then BOOM! There it was: all those C’s in that section…CSN…connect those C’s…aha! They form a C, and there are no other C’s anywhere in the grid. Adrenaline pumping now…do it with S’s…yep…there it is…they form an S…and now the N’s…uh-huh! CSN emerges from the grid, and we can certainly forgive the constructor for leaving the Y’s out of this.

It’s intriguing how tough this one is playing. With 20 minutes left before the deadline we’ve got just 84 right answers, so it’s the toughest puzzle of the year so far — yet it’s not super-complex, and it’s sitting right there in the open, requiring only one insight. I almost didn’t get it myself, but once you see it you say — what took me so long?

This puzzle is close to a beau ideal for this type of meta: the mysterious difficulty level, considering its relative simplicity; the inability to un-see it once you’ve seen it; and the elegant spareness of the idea. Why, it’s just three letters!

4.65 stars from me. The only slight ding is the too-generous hint at 41d., but if it doesn’t lead to a bunch of successful Hail Marys then maybe not such a ding after all. Last month was a slight hiccup for our meta-maestro but this is a lovely return to form.