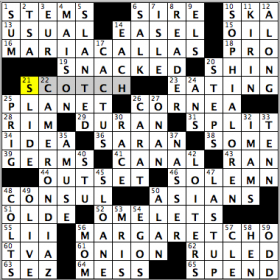 Crossword Nation puzzle solution, Week 384: “Getting in Touch with One’s Masculine Side”

Happy Tuesday, everybody! I hope you’re all doing well and that you’re enjoying your day. It’s fun with anagrams for this grid, as each of the four theme entries are clued as fictional names of men, Of course, what there are are anagrams of actual female celebrities. However, I am so hoping that a person named Sal Calamari actually exists in this world! At the very least, it should be the name of an Italian restaurant: Sal Calamari’s!

Usually, when you see the clues being capitalized, you’re probably dealing with anagrams — as was the case with today’s grid — so getting the theme entries were a breeze. What wasn’t as much of a breeze was GERMS, as I mistook Purell for Prell and was thinking along the lines of shampoo/scalp (39A: [Purell targets]).

As I’m typing this, I have a music player open and the song that’s playing is “Tennessee,” or, as far as we’re concerned, TENN, by Arrested Development — the 80s-90s music band, not members of the popular comedy series (33D: [Dollywood’s st.]). I kid you not! OK, let’s see if there’s any other music-related activity in this grid now…well, we have SKA as well (10A: [Reggae’s cousin]). Obviously, there’s Maria Callas as well. Unfortunately, STU was not clued as the Disco-loving character on The Simpsons nor as one of the original members of The Beatles (40D: [Trio after R]).

“Sports will make you smarter” moment of the day: DURAN (29A: [Panamanian boxing great Roberto]) – The man nicknamed “Hands of Stone” due to his prodigious punching power for his size, Roberto Durán won championships in four different weight classes (lightweight, welterweight, light middleweight, middleweight) in a career spanning five decades, from 1968 until 2001. Probably the most famous fight Durán was involved in was a Nov. 1980 bout against Sugar Ray Leonard, a match widely remembered for Durán uttering “No más!” during the eighth round, ending the match and giving Leonard the victory and the welterweight title. What usually is lost about the Leonard-Durán rivalry is that Durán had defeated Sugar Ray a few months earlier to initially win the title from Leonard. 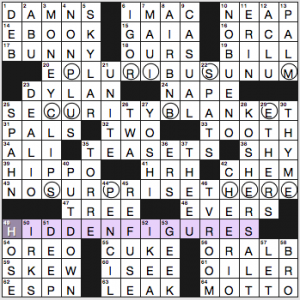 It’s that time again! Natan and Andy teach a crossword class for a Jewish senior center in New York, and the students and teachers collaborate to make an NYT-caliber puzzle. The theme here is explained by 49a. [2016 Best Picture nominee … or a hint to the circled letters in 20-, 25- and 43-Across], HIDDEN FIGURES. The circled letters in E PLURIBUS UNUM, SECURITY BLANKET, and “NO SURPRISE THERE“ spell out PRISM, CUBE, and SPHERE, all solid geometric figures. Ties in nicely with the math focus of the movie, too.

It’s a nice touch for the J.A.S.A. class’s puzzle to have 28d. [Passover brisket seasoning], KOSHER SALT. I’m ignorant of whether Rosh Hashanah or Yom Kippur has a food tradition that lends itself to a KOSHER SALT clue, but those holidays are closer to this time of year than Pesach is.

I feel like SPAHN and NEAP are on the hard side for newbies, but the theme is straightforward since you don’t even need to see what those circled letters spell out to finish the crossword. Four stars from me. 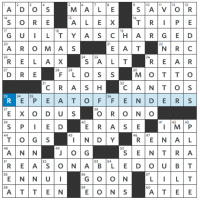 I don’t see Richard Crowe’s name in our database, so could this be a debut? If so, congratulations!

17A: GUILTY AS CHARGED [Apt description for a credit card thief?]
33A: REPEAT OFFENDERS [Apt designation for a team of plagiarists?]
51A: REASONABLE DOUBT [Apt defense for a heretic on trial?]

I liked these themers and even chuckled a bit at the first one. They’re tied together nicely enough as reimaginations of legalese that I found it satisfying. The puzzle is unfortunately timed considering the Questions of Law that we’ve been facing as a nation lately, but it was otherwise enjoyable to solve. I especially enjoyed all the 8 letter fill in the grid (including the lovely POIGNANT VIGNETTE symmetry as well as TAXFRAUD EXPONENT REDCROSS and many others), and I appreciated seeing SELMA featured for its role in civil rights history. Bonus points for featuring + and – IONs from Chemistry class!

On the other hand, I could see people getting stuck at the RONDO CANTOS ORONO crossings, especially with MANNERED being so oddly clued [Written in an affected way] in that section – maybe it’s a specific definition of having manners that I don’t get? NRC TOGS ATTEN LON might also irk some folks. Also, [Gorilla] = GOON? That struck me while solving as charged a definition as “thug” might be, so I might have reclued that one. 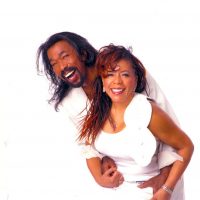 #includemorewomen: [Abby’s twin sister] ANN (which I had no clue referred to Ann Landers and Dear Abby until I just Googled “Ann Abby”) is the only woman in the grid aside from the clued (Valerie) Simpson, compared to MALE ALEX DRE SUE(!) MAYS ASHFORD LON and the clued Odin, Thor, and Johnny Cash for the men. Even with the same grid, ALEX and SUE could have easily been clued with respect to women to get a little more representative balance. 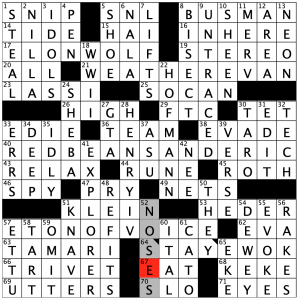 I found this one slightly tougher than usual for a Jonesin’. I was exhausted when I solved this, so that is my excuse this time! The theme involves moving an E in a four-letter word from the last spot to the front, then using that new word in a phrase that has the original word. Silliness ensues:

These phrases make absolutely no sense! Which is why I was smiling the whole time I was solving this puzzle! And that, my friends, is what it is all about! A solid 4.5 stars from me today! 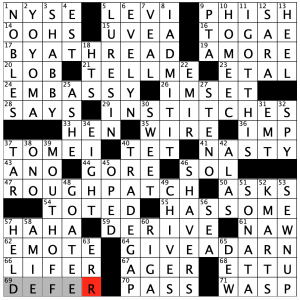 Jammed through this one pretty quickly. I didn’t have any “loose ends!” That was bad. The theme relates to sewing, as the revealer at 53D confirms:

Nice and simple. And totally enjoyable. Again no “loose ends,” or even any “frayed edges!” Good speed-solving test, at least for me. One of these weeks, I may try to solve one of these Tuesday puzzle with just the downs only. I have done some Monday puzzles that way; these might not be too bad. Perhaps next week? A solid 4.4 stars for Bruce’s fine Tuesday puzzle this week.