Peter asks, “What five-letter word is the final answer to this puzzle?” Je ne sais pas, mes amis, alors, allons-nous résoudre le puzzle? Our theme entries are associated with Paris, but for the most part are clued to avoid their association with Paris:

Oh no! That gargoyle atop Notre-Dame wants to eat the Eiffel Tower!

The five-letter word we’re looking for can’t be PARIS, since that’s in the clue for ARRONDISSMENTS. But maybe that entry can illuminate our tour of the City of Light? Let’s see … <commences research> … the EIFFEL TOWER is in the 7th arrondissement; NOTRE-DAME de Paris is in the 4th; EDITH PIAF is … well, there’s an Edith Piaf Museum in the 11th, but she’s buried in Père Lachaise Cemetery, which is in the 20th; and the MOULIN ROUGE is in the 18th. 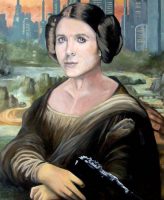 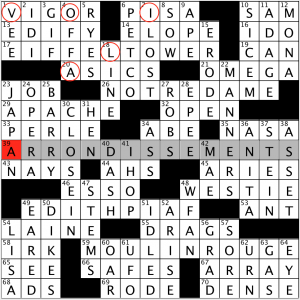 C’est la solution! VOILÀ! … which means, literally, there it is, alluding to the place (i.e. arrondissement number) of all those Parisian landmarks. Peter was kind to solvers in that you could eventually get the correct answer by anagramming if you decided that Edith Piaf was in the Edith Piaf Museum rather than Père Lachaise Cemetery.