Today’s crossword takes us on a little journey. The connection (sorry) isn’t immediately obvious – at least it wasn’t for me. 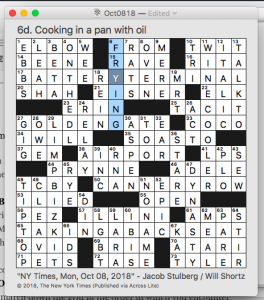 What do these phrases have in common? 8a [Where to find the ends of 17-, 27-, 50- and 65-Across] would be the AIRPORT. TERMINAL, GATE, ROW, SEAT. This theme is elevated by the sequence – they march down the grid in the order in which you encounter them. Nice for a Monday.

What I didn’t know before I did this puzzle: that MR T was originally known as Laurence Turead.

INK is our revealer at 34d and it’s hidden in each of the theme answers. Its clue is [Tattoos, slangily, sported by the four longest Across answers]. 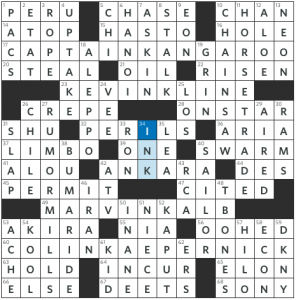 No women in this list, though. Are there many women’s first names that end in “-IN”?

As usual, Zhouqin gives us lively fill beyond the theme. Check out those stacked pairs in the corners: CHAINSAW with HORSE TRADE and RUMOR MILL with BUM A RIDE. That’s really, really good. It looks so simple, but it takes a lot of work to make a Monday grid flow so smoothly.

Other good things: I like the worldliness of ALEPPO, ANKARA, HANOI, CHILE, and PERU. And the fun mid-length stuff doesn’t disappoint, either: LIMBO, KAPUT, AKIRA, SAILOR, CREPE, UPTAKE.

Not a groundbreaking theme, but handled deftly and with the solver’s enjoyment in mind. 3.5 stars.

What’s sooner than soon? Ask an Oklahoman … or solve today’s Monday LAT. (Also, fair warning that one of the quadrants of the puzzle felt unpleasant, especially given recent events.) 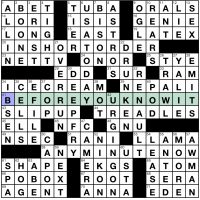 For such a straight-forward theme, this puzzle played a bit tough for me – clocking in at least a full minute longer than my average Monday LAT solving time. Was it some of the olde-timey fill (NETTV EDD TREADLES RENAULT)? Was it the cluing that felt slightly off (ALLIN CELLS and others)? Was it that unpleasant NE corner (OGLE ORALS LATEX SEX REARS) especially with LIE, DRUNKEN, and YALIE all nearby? That section felt especially devastating given what we’ve gone through as a nation this week.

Something I did enjoy in this puzzle was the fun animal sub-theme: RAM GNU LLAMA BISON ANT CAPON HOG as well as a clued wolf. I didn’t know CAPON – a rooster castrated to improve its meat quality – but now I do!

#includemorewomen: We have an awesome group of women in today’s puzzle, including LORI Grenier, [Sister of Osiris] ISIS, and ANNA Gunn of “Breaking Bad”. Instead of focusing on any of these women, though, I want to focus on all the women – and all survivors, in general – who have been retraumatized by the national events of late. We hear you, we support you, and we’re here for you. 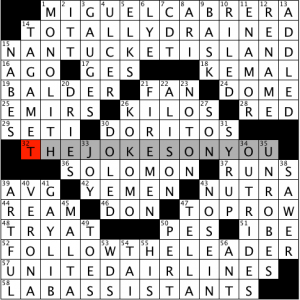 THE JOKE’S ON YOU, listeners — I’m TOTALLY DRAINED right now, so you get only five interesting things about this puzzle instead of the usual TEN: 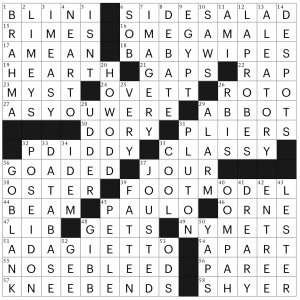 Gosh, today’s New Yorker grid is pretty.  A simple diagonal of black squares running from right to left, with some embellishments on the sides, but there’s a quiet beauty to it.

That said, I was kind of so-so on the fill.  My brain kept wanting “Leaves with a steak dinner” to be some riff on creamed spinach (since those are the leaves I serve when I make a steak dinner), but a SIDE SALAD is fine.  I’m familiar with ALPHA and BETA males, but learning that the classification goes all the way down to OMEGA MALEs was news to me – I’m only familiar with one Omega Man, and Charlton Heston seemed pretty alpha to me.  AS YOU WERE.

I looked into it, and it looks like P DIDDY is currently going by “Brother Love”, rather than “Puff Daddy”, “P DIDDY”, “Diddy”, or “Puffy”.  Please update your DATABASE accordingly.  Lots of body talk in this week’s crossword as well, with FOOT MODEL, NOSEBLEED (as in terrible theater seats), and KNEE BENDS all show up in the lower part of the grid.

3.75/5 stars on this.  Gorgeous grid, with fill that, while challenging, could have felt a little more like the usual high/low mix I’ve come to expect from the New Yorker.