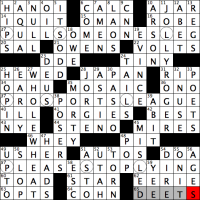 hello and welcome to episode #540 of matt gaffney’s weekly crossword contest, “Orange Is the New Black”. i solved this week 1 puzzle without looking at the instructions, as i often attempt to do. what are the theme answers? well, there are three grid-spanning across answers, so let’s take a look at those:

so, okay, the theme is pretty clearly three-word phrases with initials PSL. now that we’re into october, and with a hint from the title, i caught on that the answer was likely to be the pumpkin spice latte, that seasonal starbucks offering often referred to by its initialism. sure enough, the directions this week ask for a drink, so that must be the answer.

a simple and straightforward enough meta for a week 1. i have never tried a pumpkin spice latte. are they any good? i guess the fact that i don’t really like pumpkin-flavored anything might suggest that i wouldn’t like this beverage.

the crossword itself was unusually difficult for me to fill, especially for a week 1. mostly i had difficulty with the SOMEONE’S section of the first theme answer. i had tried PULLS ON ONE’S LEG which is both bad and the wrong length, but i wasn’t seeing {“I can’t explain that”} IT’S ODD and i didn’t know {“___, Tell Me How You Live” (Agatha Christie memoir)} COME at all.