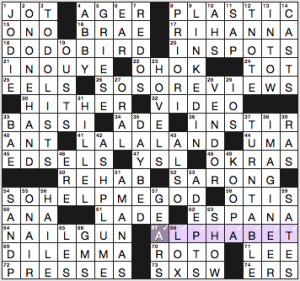 When you’re working on puzzles (for your day job) till after the Wednesday puzzle comes out, and you had a long day but can’t go to bed till you’ve played a round of medication mancala (i.e., refilled your pill boxes for the week), you’re gonna have a short write-up. Alex’s theme is … hang on, what is it? 67a. [Series whose first seven members are sung to the starts of 18-, 26-, 41- and 54-Across], ALPHABET? Ah, this is one of those musical themes, and DODO BIRD, the highly contrived phrase SO-SO REVIEWS, LA LA LAND, and SO HELP ME GOD apparently are telling us that you sing “A-B-C-D-E-F-G” to the tune of the notes do-do-so-so-la-la-so. I’ll take your word for it.

Didn’t care for ONO clued as sounding like “a cry of dismay” when OH OK is in the grid, as is weird plural AHS clued as [Cries of surprise]. Too much oh/ah business. Crosswordese BRAE, outdated slang IN STIR, plural AMANAS and REDOS? Meh. But I did like TO-DO LISTS, Robyn RIHANNA Fenty, LINKEDIN, Japanese-American Daniel INOUYE near Yoko ONO, and an IMAGINEER.

The title hints that we’re changing Os to As. Is that the case?

So what exactly is happening? Each theme answer contains the word LAD which moves “westward” in each subsequent answer as we travel down the grid.

This works quite well. I like that at least three of the themers are grid-spanners. It always seems like a little bit of a cheat to me when, in these “moving” themes, a theme entry is conveniently placed just so in the grid to get the letters to line up. Here at least the first and last entries are on the edges. While it might be ideal if all the theme entries were grid-spanners (and in fact, there are possibilities in that regard with SEVEN LAYER SALAD up top and LADIES IN WAITING or LADY AND THE TRAMP at the bottom), having five grid-spanners is a lot of theme material and it would have left no room for the GO WEST revealer. It’s possible “Go West, Young Man” could’ve been used for the puzzle’s title, but maybe this grid wasn’t originally built for a venue with titles, eh? Besides, I like “Boy Wander” anyway.

So we have a solidly built theme with a boatload of theme squares. How’s the rest of it shape up? Quite good, actually, with PLAY DIRTY, EAR CANAL, and LAPEL PINS clued as [Politicians’ accessories], a decidedly slimy set, huh? But good.

I also like EATS IT, AZALEA, AUGURY, PLUOT, SMUSH, and BON MOT. HOT ONE feels a little arbitrary and I would be challenged to use COZILY in a sentence, but for the most part, lots of positives and only a few negatives. Four stars from me. 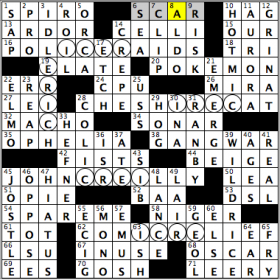 Good morning, all! It’s Ade/AOK performing as Gareth’s stunt double for today, as we get to talk about another fun puzzle from Ms. C.C. Burnikel. In it, a myriad of entries — mostly across, but one of them going down also — feature a series of circles, with the letters in those bubbles forming an anagram of the word “rice.” All of that action leads to the reveal in the grid, WILD RICE (39D: [Whole-grain food, and a description of each set of circles]).

As always, extra brownie points for African locales, especially given that NIGER, as its clue suggests, are the letters which start the word of the African country – one which happens to be where my lineage originates from (58A: [African country whose name begins another African country]). To be honest, I have not heard/seen the use of GANG WAR before today, with “turf war” ringing much more familiar in usage (38A: [Major turf battle]). Of course, having the word “turf” in the clue complicates things just a wee bit. I’m wondering just a little bit if the intersection of MACHO (32A: [Ultra-masculine]) and HEFNER was just a coincidence or a nod to the perception that others have of Hef (33D: [Playboy founder]). In my mind, the womanizing and objectification is what comes to my mind more than anything about what Hefer built with Playboy. Also, whenever I did have a Playboy magazine in my possession, I really was reading it for the articles: The magazine, for many years, wrote a number of articles on college football, from ranking the best teams before the start of the season to its annual publication of the Playboy College Football All-America Team at the end of each season.

Of course, this begs the question of how I came into possession of Playboy magazines before I was 18. Let’s just say that’s a story for a different time, as is the tale of how I blurted out a profanity without realizing my HOT MIC situation while on the radio broadcasting a minor league baseball game in Salisbury, Md. (10D: [One may pick up an embarrassing remark]). (HOT MIC was probably my favorite fill of the day, given my broadcasting background, but, again, seeing it brought up that embarrassing moment.)

“Sports will make you smarter” moment of the day: LEA (50A: [Meadow]) – Three pitchers threw no-hitters while being a member of the Montréal Expos (now Washington Nationals), with the late Charlie LEA being one of those hurlers. On May 10, 1981, Lea threw the third no-hitter in franchise history when he held the San Francisco Giants without a hit at Montréal’s Olympic Stadium in the second game of a doubleheader. Lea started, and was the winning pitcher in, the 1984 All-Star Game for the National League, a game held in San Francisco’s Candlestick Park.

Thank you so much for your time, everybody! Have a great rest of your hump day! 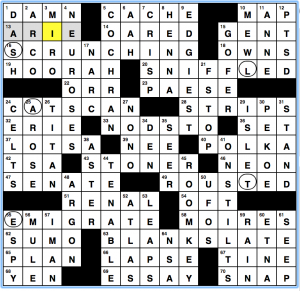 I’m conflicted on today’s AVCX puzzle (a guest puzzle from Jeff Chen) – on one hand it’s a clever theme, executed cleanly, but on the other hand…well, I’ll get to that in a minute.

Let’s dive into the circled squares in the grid and what’s going on in the puzzle:

So, as suggested by that revealer, all of those answers work just as well without their circled letter! SCRUNCHING or CRUNCHING, SNIFFLED or SNIFFED, and on and on all the way through to ESPY or SPY.  Again, this is all well and good, and though AROSE and ROUSTED (or is it ROSE and ROUSED?) feel spiritually similar in their cluing/usage in a way that feels a touch duplicative.

Anyways, that’s not my problem with this puzzle.  It’s that a very clever (albeit more simply-clued) NYT Thursday puzzle has arrived in my inbox as an AVCX puzzle.  There isn’t anything with the general irreverent tone I expect.  There’s a reference to ANNE Hathaway’s character in Ocean’s Eight that I suspect might get updated to a different film and a clue for STONER (that I still think would pass muster with the NYT breakfast test; this is 2018, breakfast is different now), but that’s about it.  It’s a fine puzzle, but given the venue, I’m a little disappointed.