This puzzle comes with instructions:

The four shapes that appear in the upper-right corner of this grid have been precisely copied and then rearranged into a new configuration in the bottom-left corner. But there’s an extra black square in the top half of the grid. Can you explain what’s going on?

My answer to that question is a resounding NO.

I did the puzzle on paper as Peter instructed. The shading on the grid makes my handwritten copy illegible in photographs, so here’s the correct grid in Across Lite: 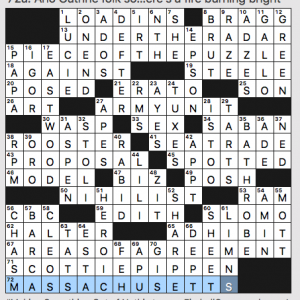 and here’s the shaded grid: 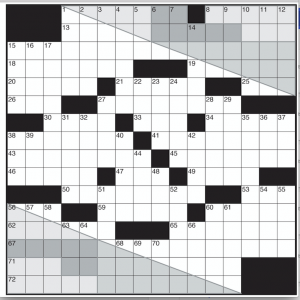 I figured the two answers that span the extra-wide grid were important:

and then I stared at the shaded areas for a long time trying to figure out what it all meant. They’re the same? But they’re not? And why do I care? To be honest, I don’t. I do crossword puzzles because I like words and wordplay. This is neither. But I had to write something, so here’s Peter’s explanation:

By arranging the four shaded shapes in the puzzle in two different ways, we appear to end up with two right triangles with legs of length 13 and 5, but with a square that’s missing in one of the two configurations. The four shapes really are absolutely identical in the two configurations, but the explanation for the apparent paradox is that the two assembled shapes aren’t actually right triangles; the “hypotenuse” isn’t a straight line, but rather bows outward in the top configuration and bows inward in the bottom one. The extra filled area in the outward-bowing “triangle” and the missing unfilled area in the inward-bowing “triangle” total to precisely one square’s worth of space. This puzzle is sometimes called Curry’s paradox, after a 1950s-era magician named Paul Curry. You can read more about it and related “geometrical vanishes” in Martin Gardner’s “Mathematics, Magic and Mystery.”

I have nothing to add. Except this:

except that, unlike Pierre {SPOILER ALERT}, I continue to say I DON’T CARE. 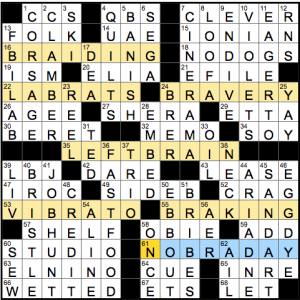 No Bra Day is an annual observance on October 13 on which women are encouraged to forgo wearing a bra as a means to encourage breast cancer awareness. No Bra Day was initially observed on July 9, 2011, but within three years it had moved to October 13, the month of National Breast Cancer Awareness Month. Users on social media are encouraged to post using the hashtag #nobraday to promote awareness of breast cancer symptoms and to encourage gender equality. Some users on social media sites also encourage women to post pictures of themselves not wearing a bra. Some women embrace No Bra Day as a political statement while others prefer the comfort of discarding what they view as a restrictive, uncomfortable garment.

The pros and cons of No Bra Day as an awareness-raising tool are fairly obvious, so I won’t dwell on them. Regardless, this is a good time to remind everyone that breast cancer kills about 40,920 women and 480 men every year. Learn more about breast cancer and mammograms, and get screened regularly, especially if you’re at higher risk. You can also donate to breast cancer research here.

The puzzle itself is solid, as expected. There are no stray BRAs in the fill, there’s not very much glue at all, and there are some nice entries like JOB HUNT, SAND ART, and FAST FOOD. A minor ding for the dupe of FBI LAB and LAB RATS (although I guess we’re supposed to read the latter as just LATS).

With four published puzzles, all of them in the WSJ, I’m going to go ahead and claim that this byline (Lewis Porter) is another pseudonym for editor Mike Shenk. It seems so anagrammable, doesn’t it? Yet, I didn’t find anything that made immediate sense, so I’m going to go with “Poi Wrestler.”

The puzzle title implies we’ll be adding some sort of term for weight to well-known phrases, and that turns out to be exactly right.  Let’s take a look. 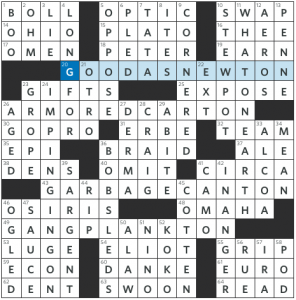 Not too bad, and I especially liked that imaginative last one. Made me think of SpongeBob Squarepants and the episode where the evil Plankton enlists all his kin in another failed attempt to steal the Krabby Patty recipe. 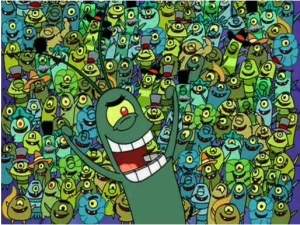 Yet I counted four puzzles with this exact theme in the Cruciverb database, including one by our very own Gareth in the L.A. Times. I think it would have been a lot more interesting if different weights could have been used (ton, pound, gram, ounce), though I don’t know if that’s really possible.

As it was, as soon as I uncovered the first theme answer, I was able to go straight to the others and almost immediately fill them in (see picture below). I know some people like the Thursday puzzle to put up a pretty good fight, but this one really didn’t, at least not thematically. 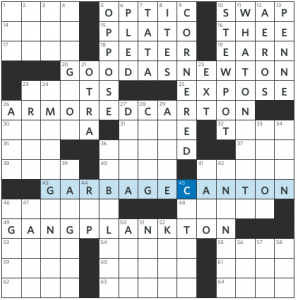 Most of theme answers were gettable with few crossings

Fill-wise, I love WHAT ON EARTH, and the Olympic BOBSLEDS / LUGE combo was nice. Also good: STEWPOT, OSIRIS, and portrait artist John Singer SARGENT (though I suppose I’m more familiar with the work of Dick SARGENT of Bewitched fame).

However, I was Naticked at the crossing of DERMA [Kishke casing] and ERBE [Kathryn of “Oz”]. I tried O, A, and I before getting to the E. I had never heard of the actor nor a kishke which Wikipedia tells me is a type of sausage. It goes on to say that in Jewish culture it’s also known as “stuffed derma” (from the German word “Darm” which means “intestine”).  The meat-averse may wish to avoid googling pictures of the dish.

The puzzle works and I enjoyed the solve, but it’s been done before and it was a much quicker solve than the usual Thursday. 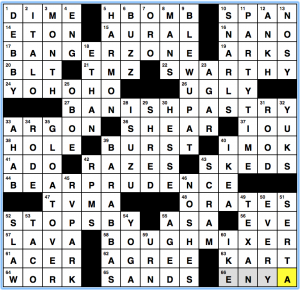 It’s Thursday!  Let’s BEQ.  This week’s puzzle is titled “Bard”, and it goes a little something like this:

The “Bard” of the title seems to get parse as “B AR(e) D” in my brain, since Bs are replacing the Ds in DANGER ZONE, DANISH PASTRY, DEAR PRUDENCE, and DOUGH MIXER.  As themes go, it’s okay.  Nothing revolutionary, but it’s not necessary to reinvent the wheel every week.

The rest of the fill was pretty standard.  I’ve never heard of a ROOD or seen it as fill, but apparently it’s a name for the Christian cross I was simply unaware of.  I enjoyed learning that ENYA’s real name is Eithne Ni Bhraonáin 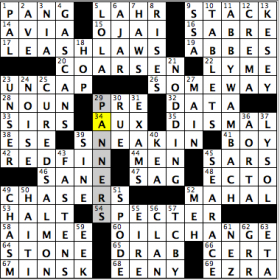 Good day, everybody! Today’s crossword puzzle, brought to us by Ms. Susan Gelfand, was thoroughly enjoyable to solve and had a very slick theme to it. (Pun definitely intended!) In the grid, four of the theme entries, with all of its clues being starred, are two-word answers in which the first word is an anagram of a word that can describe a specific type of oil. The fifth theme entry, OIL CHANGE, acts as the wonderful reveal (60A: [Jiffy Lube service, and a hint to the start of the answers to starred clues]).

It is always real nice to get to learn new something in a puzzle, and filling in SPODE was exactly that for me today, as that was a complete blind spot for me until right now (51D: [Fine English china]). My guess is that I’ve come across some pieces while watching a movie or in an antiques shop (which I have frequented a couple of times with my dad years back) but would have never been able to identify it – nor realize that Spode is an eponym. Yay for learning new things! (For enough of you, I’m sure this was a slam dunk, and I’ll try to make up for my shortcoming there with, hopefully, teaching you something you might not have known relating to an entry later in this blog.)

Only fitting that in a grid that indirectly hints at the presence of the word “baby,” we are blessed with the presence of SIRS, given that one of the men mentioned in its clue was the person who sang the iconic rap song “Baby Got Back,” Sir Mix-a-Lot (33A: [Lancelot and Mix-a-Lot]). Change one letter in that entry to get SARS (45A: [2002-’03 viral outbreak, briefly]), as that entry, along with LYME, hinted at some of the health risks when solving this grid (22A: [____ tick: disease carrier]). Seeing UNSER (23D: [Indy family racing name]) made me want to break down the history of the first family of American auto racing, but then another entry caught my eye, one which has ties to an iconic movie released in the latter portion of the 20th century that made a killing at the 1972 Academy Awards.

“Sports will make you smarter” moment of the day: SABRE (16A: [Buffalo hockey player]) – Almost all of you have heard of The French Connection in the context of the drug smuggling scheme, as well as the subsequent book and movie about it. But did you know about the The French Connection as it pertains to 1970s professional hockey? Between 1972 and 1979, the Buffalo SABREs’ three best players, who played on the same line together, were all French-Canadians born in Quebec: Hall-of-Fame center Gilbert Perreault, left winger Rick Martin and right winger Rene Robert. Because of their Francophone backgrounds, as well as the emergence and popularity of the drug scheme in pop culture at the same time, the line combination was given that nickname, one of the most popular and memorable sobriquets in NHL history.

Thank you so much for your time, everyone! Have a great rest of your Thursday and enjoy the rest of your time solving puzzles today and beyond!