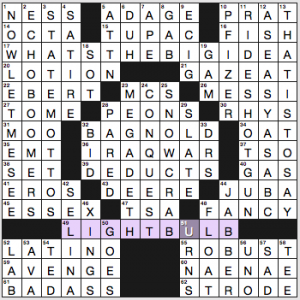 We’ve got a bit of a mini-theme and visual aspect here. The grid’s black squares depict a LIGHT BULB, 49a. [Item suggested visually by the black squares in this puzzle’s grid] (plus some 2- and 3-square black bars needed to make the grid fillable), and the 15 at 17a, “WHAT’S THE BIG IDEA?“, feels quasi-thematic since a cartoonist might use a light bulb above the head to indicate a bright idea.

The weird grid has stacked 11s that cross the 15, plus that wide-open chunk inside the bulb. Fill highlights:

The plural XINGS looks nutty, but nothing else jumped out at me in the negative.

How’d you like the puzzle? Four stars from me.

Phrases with a word ending in -CK have that C changed to an S. There’s no revealer to give any reasoning behind the change. 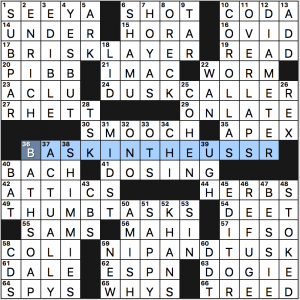 This all worked reasonably well. Maybe not a lot of excitement in the theme, but the wordplay is consistent and solid enough.

Very nice fill, especially in the corners: COROLLAS, OVERLAPS, and DIAMETER in the NE and BATH SOAP, ACTUALLY, and SHIMMIES in the SW. The other two aren’t so bad either, though BESSIE (47d, [Blues great Smith]) is not known to me. 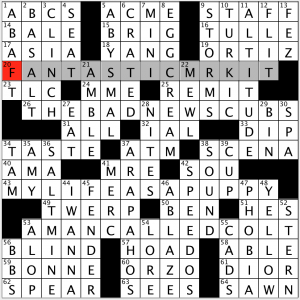 Movies that have an animal in their titles get the Benjamin Button treatment, as it were:

Cute idea! Other potential entries that our constructors likely discarded include: A LARVA’S LIFE, SHAUN THE LAMB, CHICK RUN, KITTEN ON A HOT TIN ROOF, JOEY JACK, THE CATERPILLAR EFFECT, and THE BAMBI HUNTER.

Fill-wise, it was interesting to me that there wasn’t much more contemporary than [35d: Schumer or Sedaris of comedy]: AMY (also pretty much the only women in the grid). I hadn’t heard of [57a: 1950s Wimbledon champ Lew]: HOAD, and when I think of songs beginning with I WANNA, [44d: “___ Be Around” (1963 Tony Bennett hit)] is not what comes to mind. If you don’t live in, or haven’t spent time in, New York City, or if your Grandma didn’t take you to the Pickle Barrel Deli near her condo in Deerfield Beach, you might not know that an [8d: Fizzy fountain order with flavored syrup]: EGG CREAM contains neither eggs nor cream, but is rather made with Fox’s U-Bet chocolate syrup and seltzer.