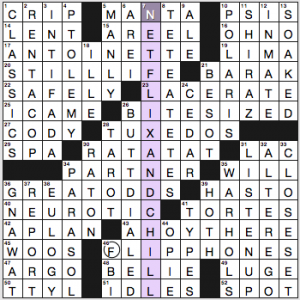 This themeless from a duo making their constructing debut is anchored by NETFLIX AND CHILL, 7d. [Modern invitation to hook up]. I know what you’re thinking: Gosh, that just sounds like what you’d suggest for some low-key hanging out on the sofa. But no. It’s euphemistic.

Elsewhere in the fill, I like STILL LIFE‘s run of Ls, SHIRAZ wine, TUXEDOS, INTIFADA, “LISTEN UP,” and BITE-SIZED.

If the WSJ’s online puzzle app could do rebus squares, you’d find little ORCs hiding in our main theme answers today. Since it doesn’t, my accompanying picture just has Os in those positions, so I highlighted them in red to make them stand out. Of course, ORCs come to us by way of J.R.R. Tolkien’s REVERED fantasy books. 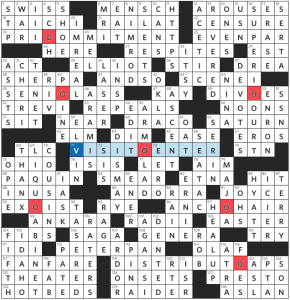 A fine theme with plenty of fun and interesting entries. Cluing is top notch as well. The only nit I’ll pick is that ORCs aren’t ever depicted as little — from the old Ralph Bakshi or Rankin and Bass animations in the 70s/80s to the more recent films. But then I guess it’s the word ORC that’s little, not the orcs themselves.

With all that theme material, there’s not much room for sparkly fill. But for the most part, Zhouqin keeps the grid moving along with lively shorter entries: PETER PAN, FANFARE, HOTBEDS, ANDORRA, MENSCH, “I’M REAL,” PAQUIN, ARAMIS, etc. etc. etc.

I also like the inclusion of ASLAN [Narnian guardian] at 130a, because Tolkien and C.S. Lewis were buddies at Oxford.

I leave you with those orcs from the 1980 animated Return of the King. I won’t ever forget this song that I first saw as an impressionable kid; it helped cement Tolkien and The Lord of the Rings as my favorite author and books. Did you know orcs had such excellent singing voices? 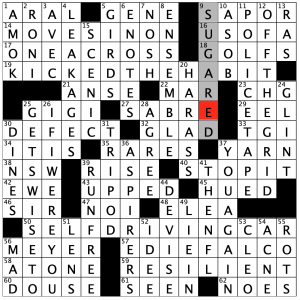 Lewis Rothlein is a new name to me. Normally when the name is new to me, the time goes up. I got a quick toehold in this one, and it fell rather quickly in just about 6 minutes for me. I count 70 words, and in typical LAT fashion, as least from my perspective, there is nothing too difficult or obscure in here. A solid 4.3 stars from me today. 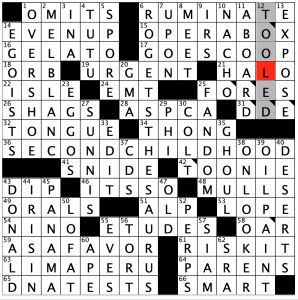 I must have made some progress in my solving skills, because now a 17 minute time on a Lester Ruff puzzle, which I would have been ecstatic with a couple of years ago, now leaves me slightly disappointed! I do get the puzzles early, so I have some leeway on solving times, and I still find that the quiet early mornings are the best: I am not so tired, my mind is a little sharper, and it is not as distracting as other parts of the day. I made a few errors in this one, and I found the upper right corner especially tough. Again, I am not ashamed to use the check answers button in Across Lite when I am stuck! A couple of those answers are a little off of what I am used to, but it’s all good. I will discuss my challenges in the list below. Suffice it to say that Stan can still make great puzzles. A solid 4.5 stars for a 72-word challenger.

It’s getting chillier outside! Garth Brooks has a major concert at Notre Dame this Saturday evening, and it will be 40 degrees with a chance of rain for those die-hard fans!