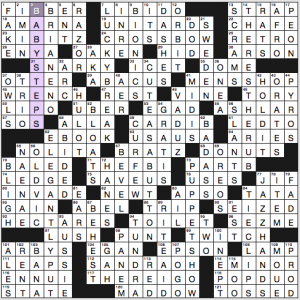 The theme entries are familiar phrases all running in the Down direction, and they’re clued as if the word down is at the end of the phrase:

Four stars from me. Also, news flash! Be sure to tune in to Jeopardy! on Monday. Erik Agard won his first match on Friday and is the returning champion.

A puzzle for those of us whose trophy cabinets are full of red ribbons. Second place ain’t so bad!

Let’s get the elephant out of the room… According to onelook.com, NOTNILC can’t be found in any common phrases- hence Hillary’s absence.

My own ignorance prohibited me from enjoying the theme all that much. I’ve tried and failed to get a grasp of history as an adult and make up for all the times I cut that class in school. The names Cass, King, and Clay were all new for me. Also, due to my configurations with Across Lite, I didn’t see the whole clue and missed the years at the end of each, so that didn’t help. Still managed to find my footholds and finish in my average time. There was plenty of good fill along the way to enjoy.

120A. [Sharp obstacles in “Sonic the Hedgehog”] SPIKES. I thought QUILLS at first.

Wasn’t familiar with DARLING NIKKI or MEDICINE LODGE, but both were inferable with crosses.

With two-word base phrases and the also-ran bridging both words, theme was certainly consistent. 3.3 Stars from me.

P.S. This song seems apt, especially with the “Rise Up” motif.

Black Ink, the program I use to solve .puz files, truncated the title so all I saw at first the The Fren…nection. After I stumbled around on the first couple of theme entries I went back and expanded the title, and the light dawned. Each theme entry is missing “le,” which is French for “the.” 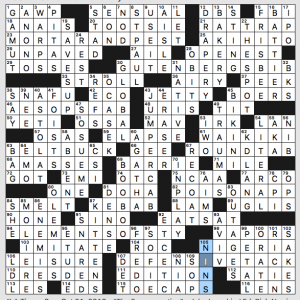 And we have a revealer, sort of. 13a [French article whose singular form is “disconnected” from nine puzzle answers] is LES. That’s clunky and unnecessary.

What I didn’t know before I did this puzzle: I’d never heard of Anne SOFIE von Otter. 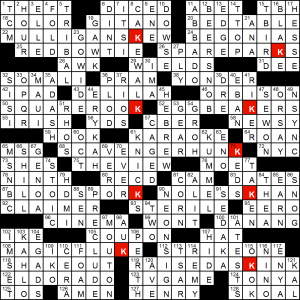 The title serves as a complete revealer today – “Task at hand” – T as K – so change T’s to K. Then repeat eight more times because it’s Sunday. SCAVENGERHUNK and RAISEDASKINK are beautiful. EGGBEAKERS, BLOODSPORK and MULLIGANSKEW felt more strained: a mixed bag.

Things that made me pause: