This puzzle is out of this world.

Oh, come on. Someone had to say it.

The theme answers are starred. 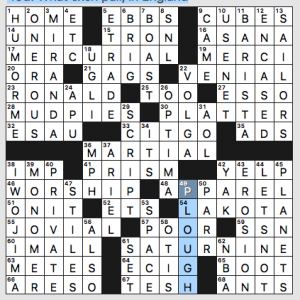 45d explains: [Etymological origins of the answers to the five starred clues] and the answer is PLANETS. Which is true – they all share names with planets – but don’t the planets and the words both originate from the names of gods? Some of the definitions are a tad obscure; I’m looking at you, SATURNINE. This is an okay-but-not-great theme.

What I didn’t know before I did this puzzle: that JohnTESH has six Emmys.

That’s two days in a row for Zhouqin at the WSJ. I wish I could be one-quarter as prolific as she is.

Today she brings us a clean and tidy theme identified by 39d‘s RATE HIKE [Fed proposal, and a hint to what’s hidden in 3-, 9-, 25-, and 29-Down]. Each entry has the word RATE going upwards (which means that the theme entries have the letter string ETAR in them). 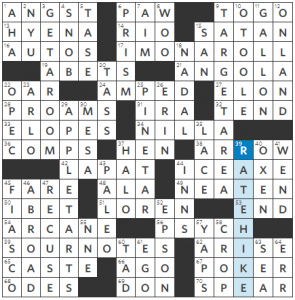 To me, this doesn’t quite seem like a Monday theme. For a newbie solver, I wonder if it becomes clear what’s happening here. But for the rest of us, this was simple yet elegant. It helped that she was working with four of the most common letters in the English language, but still, she makes it look very easy.

Likes: “I’M ON A ROLL!”, SOUR NOTES, FIASCO, ARCANE, PSYCH. Mehs: ICE AXE, PRO-AMS, LAP AT (notice that two of those are the direct result of stacking themers in the west and east portions of the grid).

Overall though, an easy, breezy way to start the week. 3.7 stars. 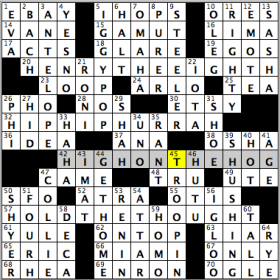 Good day, people. Hope you’re all doing well and, for those out in the Northeast, also hope you’re staying warm! (It was beyond nippy last night in New York!) Today’s crossword, brought to us by Mr. Ed Sessa, features four theme entries in which the letter “H” appears four times in each, with the fifth theme entry, FOUR-H, acting as the reveal (51D: [Club with 20-, 32-, 42-, and 57-Across as members?])

Along with a couple of the theme entries, seeing TROOP IN also made me focus on, what I felt, was the dated nature of this grid…not that there’s anything wrong with that (45D: [Enter steadily, as a line of students]). I definitely understood the pun in the cluing for EGOS, but thought that ended up falling flat at the end (19A: [Sometimes-puffy I’s?]). Liked seeing IGGY POP in the grid, as it probably stood out the most in terms of fill in the grid (5D: [Singer known as the “Godfather of Punk”]). Actually, one of its crossings, GAMUT, was pretty good fill, even if it was short, as I don’t believe I’ve come across that too many times in my solving experience (15A: [Complete extent]). There was a fair bit of crosswordese in the grid, but even with IHOP becoming even more unsightly with the pluralization, IHOPS, I’m glad that it’s still indeed IHOP and the woeful campaign of changing the name to IHOB is a thing of the past (5A: [Waffle House competitors]).

“Sports will make you smarter” moment of the day: COLLIE (47D: [“Border” dog]) – Former Indianapolis Colts wide receiver Austin Collie quickly became a favorite pass-catching target for future Hall of Fame quarterback Peyton Manning when he joined the team after being drafted in 2009 out of BYU. In his first two years with the Colts, Collie caught a combined 118 passes for 1,325 yards and 15 touchdowns. At the end of his rookie year, in 2009, Collie played in the Super Bowl loss by the Colts against the New Orleans Saints, hauling in six passes for 66 yards in Super Bowl XLIV, played in…MIAMI (66A: [Orange Bowl city]).

Thank you so much for your time, everyone! Have a great rest of your Monday, and don’t let the case of the Mondays get you down. 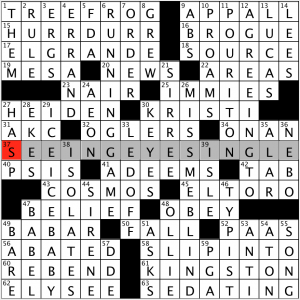 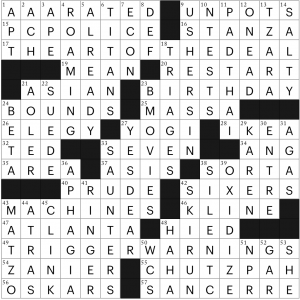 ENTRE [___ nous], I wish I had more time to tell you how much I liked this puzzle! But this post is very, very late, so I’ll give you five things: