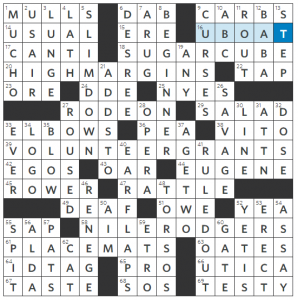 A very timely contest puzzle with a baseball theme. The World Series starts Tuesday night, and there are very many Dodger fans that are excited and hopeful that they will finally win their first World Series title since 1988! But I digress …

In this week’s contest puzzle,it asks for a baseball term.  You can change a letter in each of the theme entries to get a word that is an MLB team name:

The correct team name letters spell out the word SLIDE, which is the answer, and which also seems like a lost art sometimes when watching baseball games! It took me forever to see this, and it really isn’t that difficult. I am horrible at metas, though, so that is my excuse! One of these days I will get a complete month on Matt Gaffney’s site. I have been trying, literally, for years. I got 3 of 4 only one time, and the one I missed was the third one, not the hardest last one! But Mike (Marie) did this one, not Matt, so I will stop talking about him. A solid 4 stars for a neat sports-related meta.

I will try another one of these posts sometime again!