I hope you’re watching Erik Agard’s Jeopardy! appearances. Alex Trebek has gone off the deep end, threatening Erik with a pie in the face! You can watch that video clip here. Tuesday is Erik’s third day on the show.—Amy 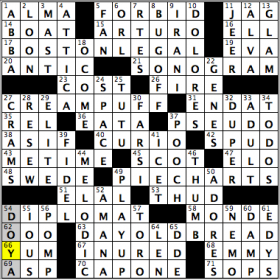 Stop the presses, everybody! Tuesday, Oct. 23, is National Boston Cream Pie Day!!! It’s something I had absolutely no idea about until doing Liz’s wonderful puzzle, a grid in which the first word in the first four theme entries can be combined to “create” the phrase that pays homage to the delectable treat. There’s a fifth theme entry, YUM, in which its clue alerts us to the “celebration” going on today (66A: [Reaction to a “national” October 23rd observance depicted by the starts of the starred answers])!

Outside of the theme, which is wonderful, there’s some great cluing and fill, with the clue/entry combination involving SONOGRAM being sneakily good (21A: [Early baby picture]). There there’s the very fresh phrase of ME TIME, something I need to take more of so I don’t burn out while traveling for work constantly for the next few months (43A: [Period of self care]). Also loving the nod to our Middle East brothers and sisters, with both IRANI (9D: [Tehran resident]) and FARSI in the grid (30D: [Persian language]). Definitely can tell our constructor has New York ties, given the cluing to LEN, a sportscaster I grew up watching on the NBC affiliate in New York City (64D: [Sportscaster Berman]). If I’m correct, Berman now talks politics on a radio station in the NYC area now.

There were a few opportunities in this grid to turn entries and give it a sports framing, starting with (Mark) DUPER, the former NFL wide receiver who was one half of the Miami Dolphins’ prolific pass-catching duo of the 1980s and early 1990s dubbed “The Marks Brothers,” joining fellow receiver and teammate Mark Clayton to catch numerous passes from Hall of Fame quarterback Dan Marino (32D: [Super-_____]). Then there’s SPUD, which immediately made think of former NBA player Anthony “Spud” Webb, the 5-foot-7 guard who shocked the basketball world when he won the 1986 NBA Slam Dunk Contest (42A: [Starchy veggie]). But another entry has won out today, and I think you’ll like it…

“Sports will make you smarter” moment of the day: LOON (2D: [Winged diver]) – For those who are fans of Major League Soccer, the premier soccer league in the United States, you will know that the newest franchise in the league, Minnesota United FC, features a LOON, the state bird of Minnesota, in its shield/logo. This particular loon has 11 feathers, one for each player on a soccer field. Pretty slick, if you ask me! Also, like most current (and former) professional sports teams in the state of Minnesota, the North Star is featured. 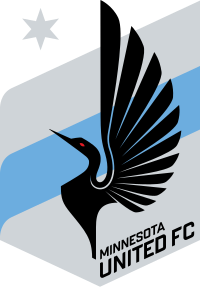 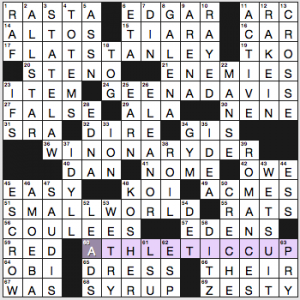 Cute theme: Four unrelated names and phrases all end with a sports trophy “cup” name, and the business is all held together by 60a. ATHLETIC CUP, [Protective sportswear … or a hint to the ends of 17-, 24-, 36- and 51-Across].

The Stanley Cup goes to the NHL champions. The Davis Cup is a tennis thing, international competition. The Ryder Cup is golf, the U.S. versus Europe (I guess the Asian, African, South American, Canadian, and Oceanian players are left out). And the World Cup is the quadrennial soccer competition—the U.S. Women’s National Team qualified for the 2019 tournament.

For all the times BRA has been in crosswords written by men, at last we have an ATHLETIC CUP for the yarbles in a puzzle by a woman. 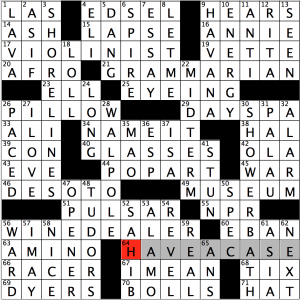 Sources suggest that “Gabriel Stone” is really editor Mike Shenk, though my brain is too fried at the moment to figure out what this pseudonym is an anagram of.

The theme of this puzzle is entities that, like someone who’s [justified in pressing a suit], HAVE A CASE:

I liked how all the theme answers were presented with tricky wordplay clues – a little touch of Thursdayish mindbendery, without making the puzzle itself too hard. Fill-wise, NAME IT, POP ART, and MIDTERM holding together the center section (or the “middle corner,” as I heard someone call it this weekend) are fun.

Answers that could be tough for beginner solvers (as always, based exclusively on stuff I’d never heard of as a beginner solver): EDSEL/VETTE/DESOTO, ELL, EBAN, WALPOLE, SAHIB.

Signing off – here’s your link to The Inkubator, in case you missed it. You’re not going to want to miss out on those puzzles! 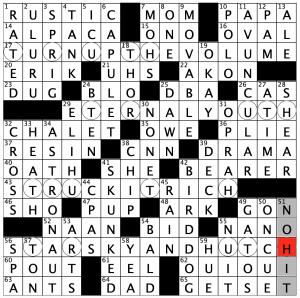 I don’t know why my timer doesn’t always turn on for only these Jonesin’ puzzles! I get to solving it, and I am usually trying to zip through to keep in tournament form, and then I am all done and the timer says 0:00! I would estimate this took around 5 minutes, but today that is purely a guess. The title is “I’m Certain”, and the flavortext states “some hidden veracity”. These phrases all have, in the circled letters, the word TRUTH:

Another fun puzzle. Again, I marvel at the brainstorm process required here. How many more phrases can you think of that have this quality? I am too tired to think of that now, but I applaud once again Matt’s construction skills. A solid 4.4 stars from me today.

Another Jonesin’ is coming next week, I’m pretty sure! 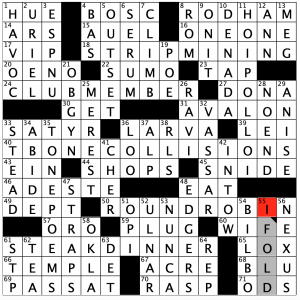 I am usually writing about how these crosswords with food related terms make me hungry. I don’t eat steak much anymore, but this puzzle certainly had my mouth watering!

So we clearly are talking steaks here: strip steak, club steak, t-bone steak, and round steak. I prefer rib-eye, but that likely wouldn’t work great here! I may make a special trip for one if any special occasions pop up! Are you getting hungry as well? Great puzzle by my Facebook friend Mark; 4.2 stars today.

Again the World Series starts today. It might be chilly tonight in Boston!