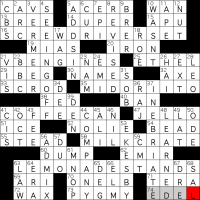 hello and welcome to episode #542 of matt gaffney’s weekly crossword contest, “Tastefully Paired”. for this tricky week 3 puzzle, matt asks us, a six-letter word that has a homophone. okay. what are the theme answers? there are six long entries in the grid that all begin with a beverage:

some of these entries refer explicitly to the beverage and some don’t, but they all start with a beverage. that much was evident very early on.

but … now what? this is where i got stuck, because the title suggests firstly tastes, and secondly pairings. several of these beverages are strongly associated with one of the five basic tastes: V8 is very salty, COFFEE is bitter, and LEMONADE is sour. MIDORI is a little more complicated because it’s a sweet liqueur… but it’s most commonly seen in the context of the mixed drink called the midori sour, which is midori combined with sour mix. and that drink is, of course, sour.

i was iffier on SCREWDRIVER and MILK, especially the latter, which is definitely not associated with any of the five basic tastes. (maybe a little sweet? a little umami?) screwdrivers are orange juice and vodka, and that’s complicated too. oranges are a little sour also, because of the citric acid, but orange juice has a lot of sugar. and then there’s the vodka, which tastes like … well, alcohol, which isn’t one of the five basic tastes either.

andy had noticed that there were many foods included in the clues, some of them gratuitously, and wanted to pair the foods with the drinks—ideally one food per drink, and then get one letter per food to arrive at a six-letter answer. we struggled to do this because we were still trying to pair the tastes, but then i had the idea of pairing them by color. that worked much better:

taking the first letters of the paired foods in order yields PALATE, a very apt word that does have a homophone (in fact, two homophones, at least the way i say it: palette and pallet.)

so, i liked this meta, but i have to admit that “taste” in the title (especially combined with the presence of v8, midori, coffee, and lemonade) is a massive salty herring. it’s very, very difficult to let go of a connection indicated that clearly by theme and title, but that connection didn’t have anything to do with the meta. i don’t know if this was what matt intended, or just a vexing accident, but i would guess it was the first thing pretty much everybody tried.

there are also smaller herrings: {Professor Plum and Miss Scarlet, in Clue} NAMES, {“Blueberries for ___” (noted children’s book)} SAL, and especially {Country known for its ham (abbr.)} DEN, are colorful foods that don’t pair with one of the beverages. i am a rather more certain matt put those in there on purpose (partly because who on earth would go that far afield to clue the normal english word DEN?), just to make it harder to spot six foods in the clues, not understand the pairing mechanism, and anagram your way to the answer.

well, that’s all i’ve got this week. how’d you like this one?