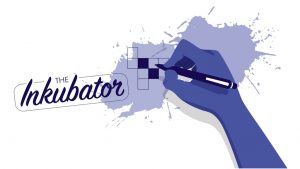 Team Fiend’s Laura Braunstein has partnered with Tracy Bennett to create The Inkubator a new venue specifically aimed at increasing the numbers of crosswords written by women, and paying those women a competitive fee. There’s a Kickstarter if you want to get in on the ground floor of supporting this venture, which will start out offering two new crosswords a month. Inkubator will transition to a subscription model after the first year. I’m in! (And thanks to Ben Tausig for making his AV Club infrastructure available to Inkubator.) 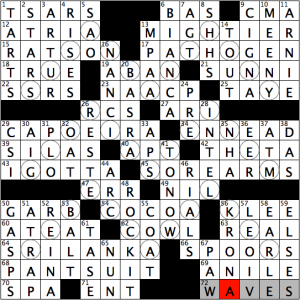 Guest constructor alert! Anna Shechtman graces us with her cruciverbal presence this week; I’ve very much been enjoying her pentaweekly work over at The New Yorker, and I’m happy to see her byline here as well.

This puzzle’s title, “Feminist Movements,” is a nod to the revealer, 72a, WAVES [Metaphors for three phases of the feminist movement, representatives of which are circled in the grid]. Sure enough, three 13-letter strings of circled letters run wavelike through the grid, each spelling out the name of a famous feminist: 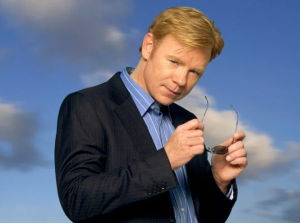 You might say that the crossing of SUSAN B. ANTHONY with NAACP [Org. that’s published “The Crisis” since 1910] was… intersectional.

This is a very cool use of circled letters to make a visual theme!

Having constructed a puzzle with very similar constraints, I can assure you that this grid was tremendously difficult to construct. So many entries in the grid are affected by the theme answers that there are bound to be some compromises in the fill. Even going up to 80 words and 44 blocks, there’s still a lot of ugliness in this grid, though. In particular, having the tail end of WALKER and WAVES in the southeast corner required using some very challenging vocabulary like LEO IV and ANILE and SPOORS and KRONA and EARLE. You’ve also got a ton of stuff like SHHS and SSRS and BALT and NHA (I won’t belabor the point, but… there’s a lot). All that tough fill explains the 5/5 difficulty rating this week.

On the bright side, l liked seeing CAPOEIRA [Afro-Brazilian martial art] in the grid.

On the subject of feminism and crosswords, go support The Inkubator! Laura Braunstein and Tracy Bennett are starting a new venue for crosswords written by women, and I’m very much looking forward to it!

S sounds are changed to Z sounds to wacky effect. 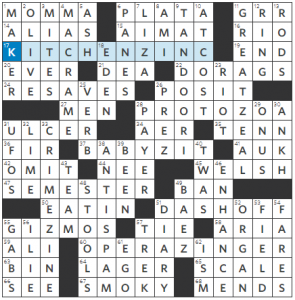 An okay set which didn’t do too much for me because it seems like a theme that’s been around as long as themed crosswords have been. But once I started saying them in silly French accents, they were much funnier.

It was a little distracting that there was an 8-letter Z word (PROTOZOA at 28a) amongst the themed Acrosses. As it turned out for me, I got GREAT ZEAL beforehand, so it wasn’t much of an issue, but if someone was going straight through the Acrosses, I can see how that might have caused some raised eyebrows.

The Zs are handled nicely in the crossings with LIZA, BAEZ, and PREZ on the shorter side and PROTOZOA and GIZMOS on the longer side. Fun entries.

Our other long fill items are MACRAME (good), TANDOORI (great!), ANTI-SPAM (is that a phrase?), ENHANCE (okay), and SEMESTER (okay). DASH OFF is nice as well. In my mind it usually means to run out the door (to perform an errand, perhaps), but I’m sure I’ve heard it used as clued [Write hastily].

Not too much in the crosswordese department, but there is ILIE (56d, [Tennis’s Nastase]). It feels pretty dated, and that small corner looks like it could have easily been re-done with some sharper fill.

Overall, though, a very clean grid, but a very standard change-a-letter theme. 3.4 stars.

And now for something completely different. Funny French accents at 2:33. 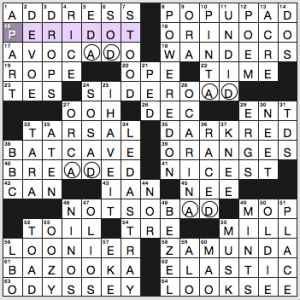 Once I figured out the puzzle’s gimmick, I jumped to the bottom of the puzzle looking for the theme revealer. Joke’s on me—the revealer is actually in the top row: 8a. [Internet nuisance … or a hint to four answers in this puzzle], POP-UP AD. There are four answers that have an AD letter combo in their middle(ish), and that AD appears above two black squares separating the parts of the answers.

The {AD}s appear in circled letters in AVOCADO, SIDE ROAD, BREADED, and NOT SO BAD. I’m not so keen on NOT SO BAD and SO SAD echoing one another so strongly in this grid. Also not keen on the rough translation of 25d. [“Eureka!”], “I HAVE IT!” (the Greek means “I have found it”). This is not something people typically shout in English.

Didn’t love all the fill—EDA ATEN OLIOS ALO ORA—but overall, a solid puzzle. 3.75 stars from me. 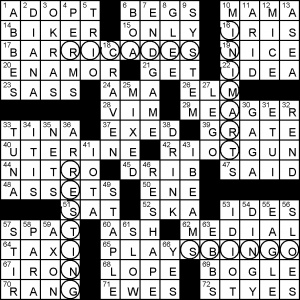 Even with the circles, I can expect a lot of people to skip the last part of the theme. The middle part has MIXED/DRINK and if you unscramble the circled letter sets you reveal cocktails. RICADES is a SIDECAR; INIMART becomes MARTINI; RESTING rearranges to STINGER?; and SBINGO is the faux-martini GIBSON. A rather quaint cocktail set, particularly the stinger. Also, the theme entries themselves are rather bland, particularly ARRESTING and BARRICADES.

Not a big fan of the grid design, with the central revealer and four themers forcing a very segmented design that fell more like a set of a mini-puzzles than a single crossword.

Not too much threw me for a loop except having ??OTGUN and getting to [Crowd control weapon]. Only thing that made sense was SHOTGUN, but my gosh that’s brutal. Turns out there’s something called a (hopefully) non-lethal RIOTGUN.