This one is not blazingly hard. It’s not hard at all. I think I was on Peter’s wavelength – even the misdirection clues seemed pretty obvious to me. 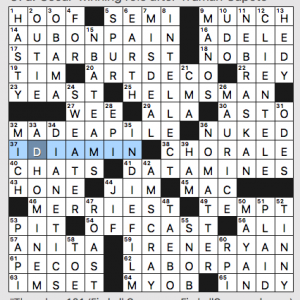 What I didn’t know before I did this puzzle: that AU BON PAIN is affiliated with Panera Bread. 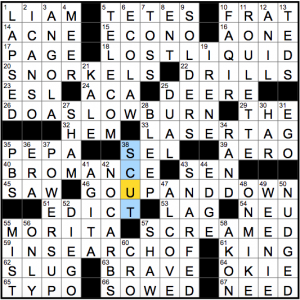 The last two Thursday NYT puzzles have been constructed by two of my Indie 500 co-directors (Erik, and now Neville), and I’ve found them both diabolical! (Full disclosure: I had to ask Neville to explain the theme to me, which he graciously did.)

Let’s start by looking at the clue for 18a, LOST LIQUID: [See 17-Across]. So you go to 17a and see that it’s PAGE [Footnote info]. See PAGE… SeePAGE… [Seepage] = LOST LIQUID. Similarly, three more long entries are clued as [See XX-Across] and are meant to be clued as “see” + that entry. Like so!

I think this theme is exceptionally clever! I love that it plays with the crossword trope of cross-referenced clues and answers. I suspect (hope… so that I’m not alone?) that plenty of other solvers will have some trouble figuring out this subtle theme.

Speaking of having trouble, there were some wicked clues in this one!

Thankfully I knew SHAW wrote “Saint Joan” and AKON sang “Smack That” to finish out strong.

This was a really brain-busting Thursday, but I enjoyed the challenge! Until next time!

Words ending in -ABLE are redefined according to the base part of the word. Warning: groan-inducing puns (and some pronunciation changes) ahead. 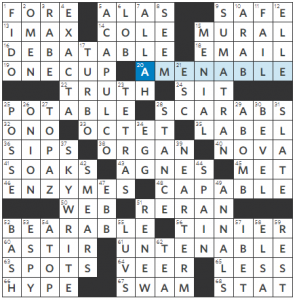 Hit or miss for me, with that last one being the biggest miss. Most of the rest are fine, and I like the corny humor. I’m on record as saying that I enjoy when constructors present well-known words and phrases in new and unexpected ways. Being open to new interpretations can not only lead to humor, but it’s an enriching philosophy to live by whether we’re talking about crosswords, art, politics, social norms, or whatever.

The long fill is very nice with SKYWRITE, ACAPULCO, SUMATRAN, NEAR-TERM, EXACTA, SCARABS, and ENZYMES. And how about that clue on SKYWRITE: [Get high for a spell?]. Sure, it stretches the meaning of “spell,” but in a puzzle full of puns, I felt it fit right in.

If puns aren’t your thing, this one probably wasn’t fun, but for the most part, I felt it worked and the fill is very nice. 3.7 stars.

One final clue of note: 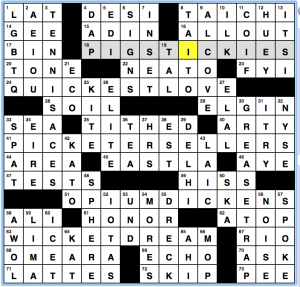 This is going to be a shorter writeup for this week’s BEQ – I’m recovering from a multi-day business trip and I’m running low on brain/trying to get over a little bit of airport/travel crud.  This Thursday’s BEQ is titled “Gross Receipts”, emphasis on the gross: 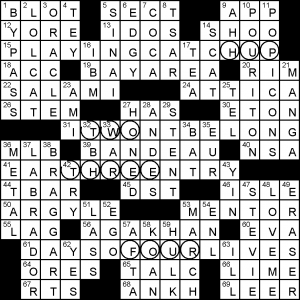 Today features another very constricted construction, but this one felt less irksome for some reason I can’t pinpoint. I added circles to the theme to highlight it, but they were lacking in my version of the puzzle. MARCH is the revealer, and hidden letters spell out HUP / TWO / THREE / FOUR. A tad humdrum, but at least we get PLAYINGCATCHUP and DAYSOFOURLIVES, which are sparkly nuggets.

Other favourite answers were BANDEAU, AGAKHAN (evoking Peter Sarstedt, for me) and LOVEME (as an answer if not a tune). LOLCAT, on the other hand, already sounds quaint.