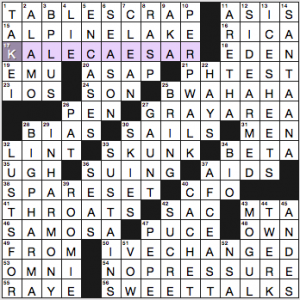 Either this is a little closer to a Saturday puzzle in difficulty, or my brain’s fried after spending the evening with high-school classmates at a local pizza joint. (Wow! We all got kinda old. Except that one guy who looks easily a decade younger than the rest of us.) 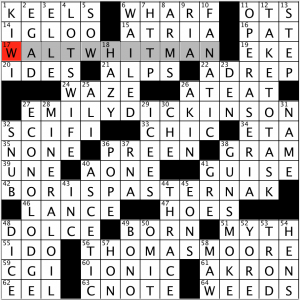 This week we have poets whose poems contain the names of other poets. I’m going to give you links to freely available versions of the poems quoted, plus a link to a poem by the poet cited in the line, because that is the sort of thing I am paid to do in my day job and also I’m a poetry [10d: Zealot]: FANATIC. 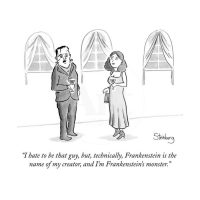 Plenty more culture in the grid, what with [20a: When “Et tu, Brute!” was spoken]: IDES; [21a: Where the monster confesses murder to Victor, in “Frankenstein”]: ALPS (Frankenstein turns 200 this year; many libraries and English departments and cultural heritage organizations are celebrating, particularly considering what a badass Mary Shelley was); [4d: Genesis figure punished for hindsight?]: LOT’S WIFE (what’s her name, man?); [11d: Genre replete with da capo arias]: OPERA SERIA.

I can’t help but think that the constructors, or perhaps editor Brad Wilber, tossed in a little shout-out to Fiend’s abbreviation for this publication, with [30d: Revolutionary in a beret]: CHE. We see you. 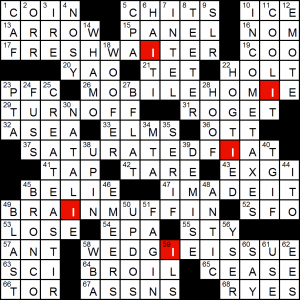 It always feels we get a lot of add-a-letter Friday themes. Today the letter is “I” and there’s no punchline to it, just I’s. As always, this means your enjoyment hinges almost solely on the (dense) theme collection. I liked the FAT to FIAT and BRAN to BRAIN changes the best, even if the concept of a SATURATEDFIAT is peculiar. On second thought, maybe not. My Fiat is water-tight, but my fiancee’s is… not. So rainstorms are a problem as we don’t have a garage. The HOME to HOMIE and WEDGE to WEDGIE worked less effectively for me as they don’t change the meaning that much.

The rest of the puzzle felt quite functional, though I guess 4 x 11 and a central 13 will force that on you. The long downs are CREATEASTIR and INCOMETAXES. There weren’t too many tough clues or answers to highlight, though [Org. for pugilists] has way too many options these days! WBA is among the bigger orgs., I think?