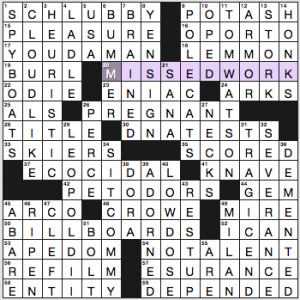 Lots of stuff in this grid that I’m not sure I’ve seen in a crossword before, most of it fresh rather than “there’s a reason nobody’s used this.” The best fresh stuff: SCHLUBBY, MISSED WORK, NO TALENT, TRAGIC END. (And newbie constructors, unless Byron’s changed his constructing style, he is not using a word list, he’s just figuring out what will fit into a spot using his head. If you’re letting Compiler or Crossfire do the heavy lifting for you, try typing everything into the grid yourself, or using a pencil on graph paper.)

Other things that feel newish:

Surprisingly smooth and zippy fill for a 64-worder. Hardly any 3-letter entries, and not many 4s, either. Those themelesses with stacked 15s usually have so many ucky little 3s and 4s, it makes them less fun.

29d. [Belgium’s longest-reigning monarch (44 years)], LEOPOLD II? Yeah, those were not a good 44 years. He was pretty much a greedy monster who ranks right up there with the biggest genocidal dudes. Idi Amin has nothing on Leopold. 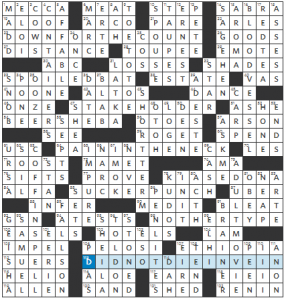 On the whole I liked this theme. The puns are mostly good (as puns go), nothing too groan-worthy. And the title is just right. But I think some tweaks in cluing were necessary for consistency’s sake, and I don’t know if that last one is salvageable. But on the whole, I’m left with a positive vibe, and that’s a good thing.

Fill-wise, CONTAINERS, SHORT-TERM and FALLS ON are all just okay. ETHIOPIA is good, and so is TOE TO TOE and the oddly-spelled PENLITES,  but SAGE HEN [Pomona College player] is tough when GAME HEN looks far more probable. KIA SEDONA is good, and so is BEERSHEBA [Israeli desert city], but the latter looks like it’s just dying to be made into a punny theme answer.

ADULT MOVIE is odd. I think “adult film” is more in-the-language, and the clue [“The Devil in Miss Jones,” e.g.] feels like it’s bordering on gratuitously graphic. A more generic [It’s not fare for kids] would be more welcome.

There’s the usual amount of crosswordese: OTOES, DAH, PDAS, EIRE, ERTE, ARTE, etc., but I didn’t get the feeling that it was out of hand. Oh but wait, there’s this one: IIII [Old sundial number] with its crosser RENIN [Kidney enzyme]. And then ACTH [Pituitary hormone]. I think that last one does go a step too far in the obscure fill department, especially crossing weird abbreviation MEDIT [View from the Fr. Riviera].

For the most part though, I like the idea of this theme and the puns were suitable. There are certainly some detracting elements in the grid, but I enjoyed the solve. 3.5 stars. 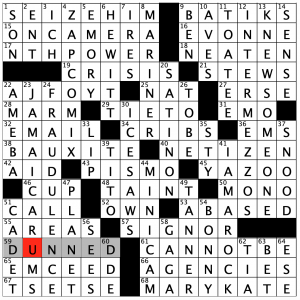 Another crossword from my favorite Double Cross constructor from Games Magazine, Michael Ashley. This played fairly easily for me, as I got this solved in under 6 minutes, but there was a lot of fun stuff in here. Interestingly, there isn’t an entry longer than 11 letters in the grid, so that seems to make for stellar fill. I have heard some complaints in recent months about LAT fill in general, but I don’t see it. Perhaps I am just happy these puzzles aren’t made by Maleska! (If you have never solved a Maleska NYT, look one up. They are brutal!) But even for a short solve time, I can say I had fun with this one. 4.6 stars for this one!

See you on Tuesday for another LAT writeup! 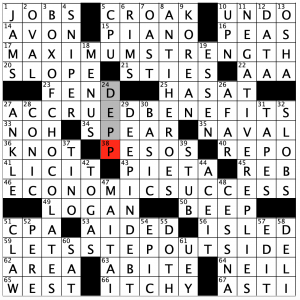 This puzzle was a classic example of how sometimes putting the puzzle down helps immensely. I get these puzzles early for blogging purposes, and I found this quite challenging at first. But after putting it down for literally a day or so, I picked it back up and proceeded to smoothly fill in the grid like it was no problem. Why is that? In case you’re wondering, I did finish this solve at like 4:30 am (I couldn’t sleep!), so it was quiet and peaceful at that time, if nothing else. But why can’t you solve the puzzle the same way at the beginning? Some of you elite solvers may not have this problem anymore, and if you have kids, well, I don’t need to explain. But particularly in this instance, it seemed like I was solving two different puzzles. Isn’t the brain fascinating?

Great puzzle by Greg today, and I am fast becoming a huge fan of his puzzles. A tough 72-worder today with 6 15s interlaced in the grid. Extremely well done and a fun solve. 4.7 stars for this one.

Have a wonderful Saturday!