It’s that time of year! Bring on the spooky puzzles.

This week’s WaPo features six different “ghost-writers,” who are both absent and present in the puzzle. Creepy, right? 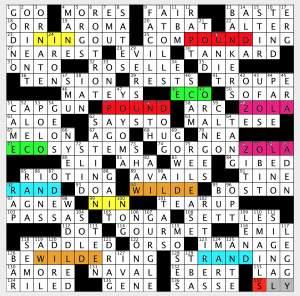 *It should be noted that there are six more symmetrically placed (!) theme answers which directly clue the “ghosted” writers themselves, all clued as “Ghostwriter of [insert work here]”

Though similar in concept to Evan’s puzzle “No Money Down” (coincidentally, they both use POUND in their theme answers), this one has its own merits: the long theme are common 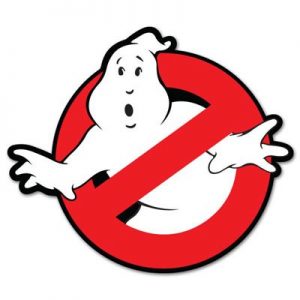 phrases with or without the missing portion, which is cool. Also, because the authors are actually present in other parts of the puzzle, the solver can use those the two entries synergistically in order to suss out tricky areas.

Overall, I found this much more difficult than normal (took me about double the time of a normal WaPo solve), but it never felt like a slog. I caught on to the theme early with a few gimmes (i.e. 104D [Fifth step on a scale] is definitely SOL– so you know something funky is going on), and despite knowing all of the authors, I still found it to be quite challenging.

And although it’s expected of Evan’s work, it should still be noted that all of the crossing answers make legitimate entries with or without the author’s name inserted. That, coupled with the fact that the names of the authors are symmetrically placed in the puzzle, is pretty darn impressive.

VIDEO GAME CLUE OF THE WEEK: Ummmmm… Was there one? Must’ve been a ghost! I think the video game clue being absent may be the spookiest thing about the grid.

Fun, challenging puzzle. 4.5 stars from me. 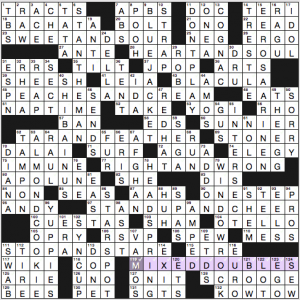 It does feel a little weird to have both a title and a theme revealer, no? The theme revealer would make a crisp title for the puzzle, but it’s nice in the grid, too. MIXED DOUBLES is 119a. [Game suggested by this puzzle’s theme], and each of the themers is made by anagramming the clue word/phrase into two words joined by “and”:

Solid theme, and it works your anagramming muscles.

Anagrams. Why does it always have to be anagrams?

Each theme answer contains an anagrammed state name; the postal abbreviation is given in the clue (which is good or I would never have grokked the theme). 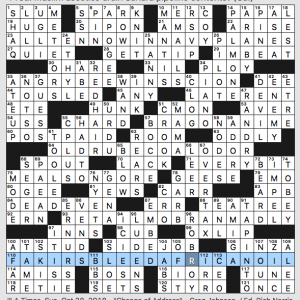 This theme gets a solid “meh” from me. I’m not a big anagram fan, and the theme entries weren’t amusing enough to make up for that.

What I didn’t know before I did this puzzle: that STYROfoam is a Dow product. 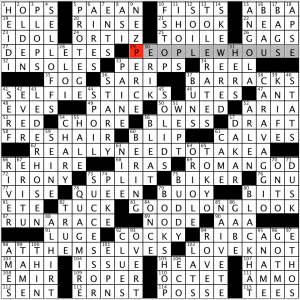 It’s an old fashioned quip puzzle! I may not want to solve these every day, but I really like one once in a while. This time we have a bit of humor directed at a minor act of narcissism:

Some nice long downs in the fill, like NEZ PERCE, CARAVAGGIO, LEDERHOSEN, and BOOKSHOP.

[86d: Kaplan or Kotter]: GABE. Gabe Kaplan was a stand-up comic who starred as Gabe Kotter in Welcome Back, Kotter, a sitcom about his experiences as a high school teacher in Brooklyn, and filmed — as many 70s sitcoms were — in front of a live studio audience. Can you imagine: a stand-up comedian starring in a sitcom based on his own life experiences, and playing a character with a similar name to his own? I bet that has never, ever happened again on television.