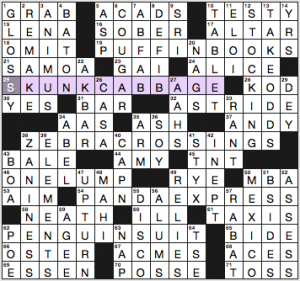 In the category of “What are these doing in a Monday puzzle?,” we have ESSEN, ELOI, maybe James AGEE, and the unfamiliar-to-me TAKE ODDS (13d. [Accept a bet]).

We have a new byline today! However, it anagrams to “nightmares,” so I don’t think we’re looking at actual debut, but another pseudonym for editor Mike Shenk.

That appears to be all there is to the theme; the first words can be synonyms of “apparition.”

But with a simple theme like that, you’d think the theme entries themselves would be easier to solve or more commonly known (or maybe it’s just me). And the puzzle itself is a 72-worder, exceedingly low for an early-in-the-week grid. For the most part, it’s impressively filled, but there are some unusual entries like HOLO and RADIX that we don’t usually see on a Monday, both of which made me pause.

Because of the low word count there’s quite a lot of long fill: DETONATOR, LONDONER, TOLSTOY, PROVISOS, and “SI SEÑOR” are my favorites. KOWTOWS would be great, but KOWTOWS TO is less so. ELEVENTH, EXTRACTS, and ASPIRING are all more functional than fun.

In the end, this puzzle felt like it didn’t know where it belonged. The simple theme says Monday, but the hard-ish theme answers, low word count, and some tough fill say later in the week. 3.3 stars. 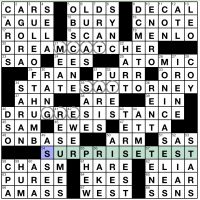 20A: DREAM CATCHER [Protective net above a cradle]
34A: STATES ATTORNEY [Government prosecutor]
40A: DRUG RESISTANCE [Reduced responsiveness to medication]
54A: SURPRISE TEST [Unexpected classroom announcement … and, initially, one hiding in each set of puzzle circles]

I was a student from pre-K all the way straight through a PhD and now I’m a teacher … and I’ve never heard the phrase SURPRISE TEST. Pop quiz, sure, but not this. Is it a regionalism? Comment below if this phrase feels natural to you. It gets a few Google hits, but not as many as I’d like to see to be a revealer. I appreciate that each test in the themers spans two words and it was indeed a nice surprise to see something like MCAT in a non-manufactured phrase, but I’d certainly never want to take one of these tests on a surprise basis!

I liked the mini theme across the top row (CARDS OLDS DECAL) but didn’t quite like some of the other fill in the puzzle, including EES SAS SSNS SASE DSO ARA.

#includemorewomen: In today’s puzzle, we have ETTA, SELA Ward, MONICA SELES, and [Goodnight] IRENE. Not bad, but there could have been much more female representation had fill like FRAN, SAM, and PARIS been clued with respect to women as opposed to men from 50+ years ago. A good RULE OF THUMB (with credit to Erik Agard): If you can clue something with respect to a white dude vs. a person of color and/or a non-male person, the tie should go to representing people from minoritized communities. Don’t agree? AT ME @naytnaytnayt on Twitter and let’s chat. 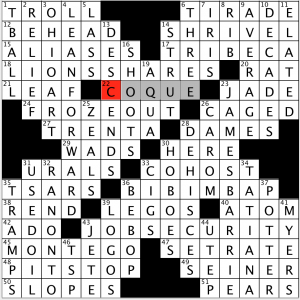 No TIRADE from me today; I’m keeping this short. Five things: 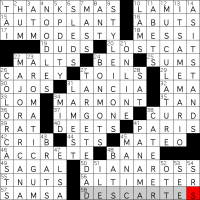 joon here with the extremely belated review of monday’s themeless new yorker puzzle by kameron austin collins. sorry it’s so late! i completely forgot i was on the docket for monday, and by the time amy reminded me today, i had halloween responsibilities, so now here we are. but i’m going to get this review posted before it’s literally next month.

i solved this puzzle downs-only, as is my custom on the new yorkers, and hoo boy, i was pretty concerned after a while that i just would not be able to finish. but i kept plugging away, taking things out and putting them back in, and eventually i got through it. the only part i didn’t struggle with was the southeast corner, where the short crosses were easy enough for me to pick off that DIANA ROSS/ALTIMETER/DESCARTES triple stack with no problem. everywhere else, though? problem.

let’s start in the northwest, where i got TAI, HUM, ATM, KP DUTY, SLEDS, and ANT right away, giving me THA_KS_A_, AUT_PL_N_, and IMM_DE_T_. 17a could only be IMMODESTY, and 15a was certainly going to be AUTO something, and then the OO in 4d gave me NOODLES and THANKS_A_. i thought about a lot of things that could be: THANKS MAN, THANKS DAD, THANKS MAC, etc. none of them gave me anything sensible for the start of 9d, {Vogue standbys, say}, and 7d {Holiday rite} could be so many things. i had to come back to this a few times.

in the northeast, i had LAMS and ABETS and then none of the three long answers right away. gulp. similarly, the southwest corner gave me BRATS and ELSA and none of the long answers. but i did eventually solve both of these corners, partly by eventually thinking of AS IT STANDS and IT’S-A ME, MARIO and partly by working the crosses to see what might letters might fit in certain places. ___RETE at 46a can’t be very many things; i thought of EXCRETE, SECRETE, and ACCRETE and those are really the only possibilities. S__SA at 57a suggested that 22d would end in a vowel, so pairing that with ACCRETE gave me MAJOR ARCANA. it still took a lot of picking away at it before i eventually pieced together COLOR CASTS and AROMATIC GUM, starting from guessing COLOR and AROMATIC.

and then i had to come back 9d. with BON MOTS, TARGETED AD, LAMEST (hey, while we’re here: i’d love to never see this ableist usage in crosswords again), and MID, the center of the grid was mostly in place, and once i guessed ONLINE for {Mad ___ (outraged by a think piece, say)}, that was a big help. it still took a while to get STYLE ICONS because {Italian automaker since 1906} LANCIA is only about 20% familiar and {Hollywood’s Chateau ___} MARMONT is 0% familiar. i also kept wanting AUTOPL_N_ to be a compound word starting with AUTO (AUTOPLANE? is that a thing?), rather than the two-word phrase AUTO PLANT. whew.

all told, this was one of the most satisfying downs-only solves i’ve managed to complete. but are people familiar with {Mixed-holiday celebration} THANKSMAS? i sure was not. and now that i’m looking at it, it seems less than elegant to cross it with 7d MASS {Holiday rite}, since (one presumes) THANKSMAS is a portmanteau of thanksgiving and christmas, which in turn is derived from christ + mass. so you basically have MASS crossing MASS up there. it’d be less of a dupe if 7d had been clued in the other sense of MASS (either the large group sense or the physics sense), which is not etymologically related to the religious mass.

still, i enjoyed this puzzle immensely. lots of 3s, which is a little unusual for a themeless, but many unusual, fresh, and striking entries. not a ton of tricky or deceptive cluing, but sometimes the difficulty is more intrinsic to the grid than to the clues.