I wasn’t sure what to expect with this one; Ben Tausig had an AVCX* puzzle some months ago with a TL;DR theme — would there be a similar gimmick? And do all of you listeners know what TL;DR means? It expands to Too Long; Didn’t Read, and has fulfilled a purpose on The Internet as either a snarky comment that you make to your Internet Friends about someone’s extensive screed on The Internet; or, in a more functional sense it has been nouned to refer to a summary, or as we say in the Hallowed Halls of Academe, an abstract. Now you can say, hey Laura, instead of a lecture on Internet linguistics, just give us the TL;DR! IKR*! I’ll do my best. 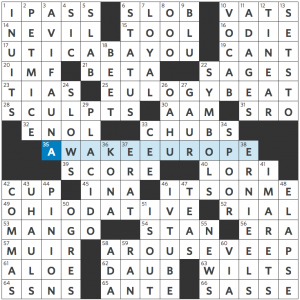 ICYMI*, we’re looking for a five-letter proper name, and we have five theme entries:

Whaddaya wanna bet each themer points, in some tricky manner, to each one of those letters? IMHO* those are some high-quality nonsense phrases, which immediately tells me that we’re looking for something orthographic rather than referential, AFAIK*. So I checked in with my meta-solving BFF* Jesse, and we went to work. FWIW*, I noticed that the letters T, L, D, and R appear in four of the five themers, but not in any particular pattern, so we were SOL*. Then Jesse took a look at the clues, and saw that they contained a bunch of other four-letter acronyms:

SMDH* that I didn’t catch that. We also noticed that when you eliminate the vowels from the themer entries, you get those same acronyms:

At this point in our solving process, IIRC*, Jesse was AFK* having dinner, and it hit me that if you arrange the answers to the clues that contain the acronyms in themer order you get:

And there we have our five-letter proper name: MSNBC, the news channel. Very nice mechanism; OTOH*, I would’ve felt a stronger “meta-click” had the answer been also four letters. CUL8R*!

AVCX: American Values Club Crossword
IKR: I Know Right
ICYMI: In Case You Missed It
JBYAM: Just Between You And Me
IMHO: In My Humble Opinon
AFAIK: As Far As I Know
BFF: Best Friend Forever
FWIW: For What It’s Worth
SOL: Shit Out [of] Luck
SMDH: Shaking My Damn Head
IIRC: If I Recall Correctly
AFK: Away From Keyboard
OTOH: On The Other Hand
CUL8R: See You Later!

Baby, if you’ve ever wondered …