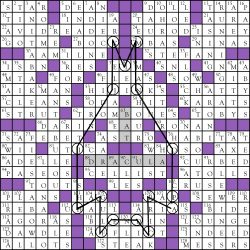 Good morning, everyone! Here is hoping things are going well with you on the eve of Halloween! Speaking of “Fright Night,” today’s puzzle features one of the creatures that is a staple of October 31, the BAT, with the circled letters, when connected alphabetically (starting with circled “A” toward the bottom of the grid), forms the shape of our nocturnal mammal (63D: [Vampire’s alter ego who is “sleeping” upside down in the starred answers]). Those six starred clues/entries, all going down, act as the picture frame in the grid, allowing you to better see DRACULA in bat form in the grid (88A: [He’s our favorite vampire!]). The pattern of cluing with “DRACULA” and the starred clues are similar.

Addendum: Of course I did not notice the theme entries each having “TAB,” which is “BAT” spelled backwards — and, for purposes of this grid, hanging upside down — until hours after solving! Straight cuteness!

For a while, I had absolutely no idea what those starred clues had to do with the theme, which also took me a while to figure out because 1) I could not see the shape of the bat in my confusion, and that was due to 2) not figuring out which circle was the starting point to begin connecting the circles, especially since I initially started my connecting at the top, with the “KLM…’ circled letters toward the top. Only after I wrote out all of the letters, starting with K, did I realize that it was in alphabetical order. Classic overthinking on my part, anticipating something more byzantine than it really turned out to be.

Given that, though, once figuring things out (after puzzle was solved), I really liked the execution, and give Liz credit for nailing the outline of the bat with its wings wrapped around it. Extra points for nailing the pointed ears at the bottom!

The fill outside of the them entries was pretty fun, too. For a little while, I thought the long entries of AVID READER (22A: [One whose hobby is an open book?]) and EURO DISNEY were part of the theme until noticing the starred clues (24A: [Original name of a Paris amusement resort]). Those are two awesome entries, by the way! If you’re into writers with initials, you’re in luck with both A.A. MILNE (30A: [Winnie the Pooh’s creator]) and E.L. JAMES (37D: [“Fifty Shades of Grey” author]). Though the clue to HORN (53D: [Unicorn feature]) has nothing to do with music, it was nice to see it intersect with TROMBONES (62A: [Instruments with slides]). Oh, and there’s definitely more than just a hint of sports in this grid, with FIESTA BOWL,  TINO (17A: [Ex-Yankee Martinez]) and AIKMAN being part of the grid (51A: [Quarterback Troy]). Guess I could have talked about the basketball feats of Wilt “The STILT” Chamberlain (35D: [Long-legged shorebird]), but decided to go in another direction…

“Sports will make you smarter” moment of the day: SOW (48A: [Piglet’s mom]) – Senegalese soccer player Moussa SOW is currently a forward playing professionally in the United Arab Emirates, but, in 2010-11, he played a major role in bringing an unlikely championship to a team in one of the top five leagues of European soccer. Playing for French side LOSC Lille Métropole, Sow led the French top division, Ligue 1, with 25 goals in leading Lille to their third French top-flight championship in club history. Sow played 50 games for the Senegalese national team, scoring 19 goals in international duty. Though he was on the Senegal roster at the 2018 World Cup in Russia, he did not enter in any of the three group games. Sow retired from international duty in August of this year.

The theme revealer, sort of, is 34a. [Late night for a working stiff … or a hint to the circled squares], GRAVEYARD SHIFT. There are six Across answers that contain the letter sequence RIP, which might be seen on the occasional gravestone but GRAVEYARD isn’t necessarily something I associate with it. The SHIFT part is there because the entries with RIP have those circled letters shift rightward as you go down through the grid. Everything other than 34a is clued as if the puzzle’s themeless, so it’s got an odd feel for a Tuesday puzzle.

It’s also got too much fill that feels out of place in an easy Tuesday grid. To wit: ORONO, SEEPY, Spanish DAMA, A-OKAY (isn’t A-OK more familiar? what do you all think?), EDA LeShan, The ERL-King, French AUSSI, old Nixon initials RMN (with a tricky clue to boot, [J.F.K. alternative in 1960], right on the heels of LGA with a similar clue), and variant spelling EGIS.

In entering the constructor’s name for the blog tag, I realized he usually uses the middle initial P. in his byline, but it’s omitted here. Huh.

Colin Gale’s second Tuesday WSJ puzzle in three weeks has us in pieces! 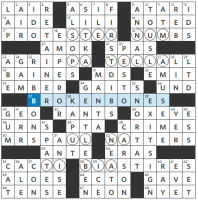 As a solver, this ambitious puzzle brought me both joy and pain. I really enjoyed the theme and its execution throughout the grid, and I liked that the title (“Skeleton Crew”) is so perfect for Halloween week, even if the puzzle isn’t related to the holiday at all. I also appreciate that the constructor didn’t just go for the bones with the shortest or easiest names to incorporate into the grid. They went for it, especially with STER/NUM and PA/TELLA.

However, this puzzle might have had a record number of Naticks for me, perhaps because of the constraints informed by the 67(!) theme-related squares. By the time I filled in what I knew and would have just been guessing at the rest, I had the following squares blank (which is troubling since some of these were theme entries):

I’ll admit that part of this is me needing to study up and learn more in general, but a lot of this also fill just feels tough for a Tuesday puzzle. I think this puzzle would have been just as successful but more enjoyable had there been three themer rows with BROKEN BONES + the revealer at the end, though I acknowledge the symmetric constraints of an 11-letter revealer in this puzzle’s setup.

#includemorewomen: In today’s puzzle, we have the clued Leslie Caron (LILI), fictional MRS PAUL, and [Sculptor/architect Maya] LIN for women in the puzzle. That’s it. Not great, especially considering all the men in the puzzle: AGRIPPA (and clued Augustus and Mark Antony), BAINES (and clued Fitzgerald and Milhous), ABE, the clued bachelor (but not bachelorette?) in I DO, EMPEROR Augustus, both ALSOPS, GENTLE BEN, and CARSON McCullers. Is it crazy that Augustus alone gets almost as many mentions in this puzzle as all the women combined? 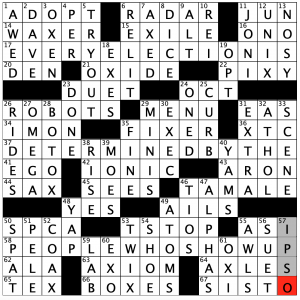 Timely theme, as the midterm elections are next Tuesday. This means the end of all the political ads, which I am sure there is bipartisan agreement in the dislike of those annoying things. The theme is a quote by Larry J. Sabato: EVERY ELECTION IS DETERMINED BY THE PEOPLE WHO SHOW UP. That may be true, but after gerrymandering and voter suppression tactics, it may be more idealistic than factual. Regardless, there are sure to be some fireworks next Tuesday night/Wednesday morning in the news! I am willing to give props just for finding a quote that breaks evenly into three 15s! 4.6 stars today. 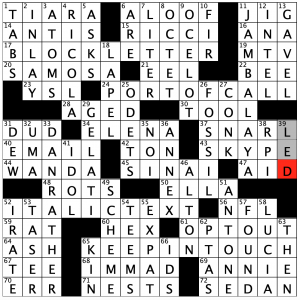 Correspondence! The handwritten form has quickly become a dead art, but I have learned through my semi-deep dive into fountain pens that there are people out there who still LOVE to write, whether in a journal, taking school notes, or actually writing someone a letter or a card. Let’s look at those themers:

Yes, the theme answers are parts of some and all of others, but there are still 6 theme answers, and the intent seems crystal clear. This is a Tuesday puzzle, so we don’t want to think too hard! We have just about every form of communication here except for carrier pigeon! Actually, there are several more forms, but these are probably the most commonly used by far. I still haven’t pulled the trigger on a super expensive fountain pen, but I will let you know when I pull that trigger! Another smooth puzzle from C.C. Burnikel; a solid 4.5 stars from me.

Have a wonderful day!