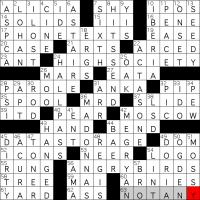 hello and welcome to episode #543 of matt gaffney’s weekly crossword contest, “Three by Fives”. for this week 4 puzzle, matt challenges us to find a five-letter word with three consonants and two vowels. okay. what are the theme answers? well, there are five *ed across clues (four long and one short):

okay, so it’s tuesday morning and i haven’t gotten anywhere with this meta. not that i’ve necessarily been thinking about it all weekend (i’ve been a little preoccupied with puzzle boat 5), but still.

the *ed entries don’t seem to have anything to do with the title or instructions. i mean, i guess PHONE and ANGRY are 5-letter words with three consonants and two vowels. there are a lot of 5-letter entries in the grid, some of them with that particular consonant/vowel breakdown, but i don’t know what’s going on with those either.

the one thing that struck me as unusual was the clue for SOLIDS: {Magma contains many of them}. that is a very, very strange way to clue this word, especially since one generally thinks of magma as being molten, not solid at all. (okay, i just looked it up, and it actually refers to a different definition of magma than the one we’re all familiar with.) and of course magma is a five-letter word with three consonants and two vowels. but i don’t know what else to do with it.

oh, actually, wait, now i do. the other striking clue i noticed was {Thespian DeLuise} DOM. why not just say “actor”? because actor is a five-letter word with three consonants and two vowels, and it seems likely that matt couldn’t use that word because that clue/answer pair wasn’t part of the theme. it turns out there are precisely five words in the clues that fit the instructions, all of them appearing at the start of the clue:

notice that in all five of these words, the consonants form a three-letter palindrome: MGM, CBC, TNT, SMS, and DVD. not only that, SMS is the protocol used for PHONE TEXTS. aha! now we’re onto something. in fact, each of these palindromic trigrams is a common TLA that can be associated with one of the *ed clues:

taking the first letters of the corresponding grid entries gives PSYOP (“psychological operations”), which is indeed a five-letter word with three consonants and two vowels. kind of funny that it is derived from psyche which, in the original greek, starts with Ψ.

this is a very creative meta. where did the idea for this come from? it’s a strange one because it would have been impossible if the instructions had not indicated that we were looking for words fitting very specific criteria.

the weird use of “magma” was certainly my way into this meta, but it’s worth thinking about whether there is a more natural-looking way to write a clue for an entry beginning with S that starts with “magma”. the best i can do is that apparently a major portion of almost all magma is SILICA, although it’s hard to know the composition of molten rock with any certainty.

anyway, tough meta, and i’m really glad i got it at the 11th hour. how’d you all fare on this one?