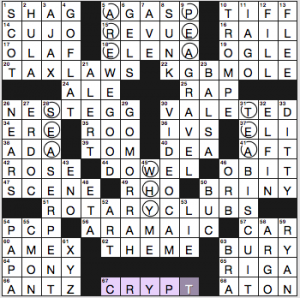 The spooky Halloween theme involves a cryptic CRYPT. Five theme answers begin with 3-letter words that sound like letter names. You get C from SEA SERPENT, R from “ARE WE GOOD?”, Y from “WHY ME?”, P from PEA GRAVEL, and T from TEA BISCUIT. The CRYPT is buried beneath black squares in the bottom row of the puzzle. I don’t know what exactly a TEA BISCUIT is, but I’m guessing it’s a bland cookie served with tea in Britain.

As Bruce notes in his Wordplay remarks, 59-Down RYAN holds special meaning for him. (Ignore the clue about that politician on his way out.) “My son Ryan was laid to rest in 2001, but he is remembered in a small way today, at 59-Down. More important, the Ryan Haight Online Pharmacy Consumer Protection Act of 2008 (introduced by Senator Dianne Feinstein and signed by George W. Bush) continues to save lives.” Our condolences to you and your family, Bruce.

I didn’t love all the fill, but it’s mostly pretty solid. 3.75 stars from me.

Another new byline. It anagrams to “Cauldron Brew” so this is another in the long and growing list of pseudonyms for editor Mike Shenk.

It being Halloween, today’s puzzle has a witchy theme. 65a is clued [Witch, and the combination of letters added to this puzzle’s theme answers] and is answered by CRONE. 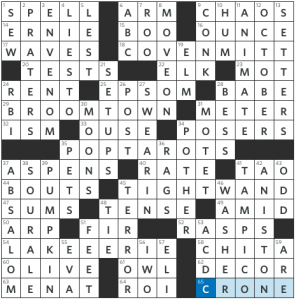 Cute theme that mostly works. It’s a shame about the tarot entry, but maybe there just is no other witch-related word that is a different word without the O.

I would have enjoyed this a little better without the revealer, because most of us know that when you’re adding a different letter to theme answers, they will often spell out something. But maybe not all of the WSJ solvership would know to check for that.

The rest of the grid is nice with Halloweeny spices sprinkled here and there in the clues and in the grid, notably OCTOBER and PUMPKIN. ANIMATE (with its clue [Bring to life]) evokes Frankenstein, though I don’t see why it didn’t do it explicitly. Also good: ABSALOM, SOUR ALE, and ANISTON.

I could’ve done without: PRATERS [Idle talkers], POTHER [Commotion], and crossing proper names TAMPICO [Port of eastern Mexico] and CHITA [“Kiss of the Spider Woman” Tony winner Rivera]. TAMPOCO seemed like a very real option, but thankfully CHOTA did not. Also, OUSE [River of eastern England] is pretty stale crosswordese, but it didn’t bother me much since we used to live not far from the River Little OUSE. Fun fact: The Little OUSE forms much of the border between Suffolk and Norfolk counties in East Anglia (southeastern England).

On the whole, though, a solid Halloween puzzle.

I leave you with MEN AT Work’s “Who Can It Be Now?” Perhaps you will be singing this song when your doorbell keeps ringing tonight. 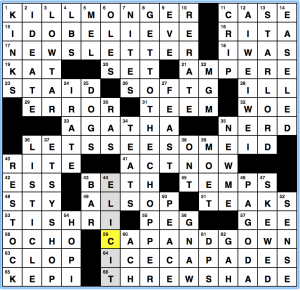 Happy Halloween!  It’s a themeless week at the AVCX, courtesy Paolo Pasco, so let’s dig into some of this fill:

My computer auto-fills “Reelin’ In The Years Donnie and Marie” when I type REE into the search bar, do not send help, this is a prison of my own making. Anyways, this is what I thought of initially for “Bygone skating variety show”, not the ICE CAPADES, have a nice day. 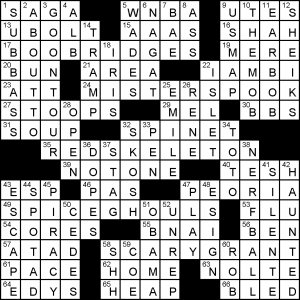 I think this puzzle’s theme was aiming for cute over consistency. We have a collection of names – four individuals, one collective; four real, one fictional – that have been Halloween-ified. The clues all feature additional puns, groaners if you will, that actually were my favourite part of the theme. It pulled the whole thing together in a very much more polished way that allowed me to overlook the otherwise loosely conceived theme.

Bits: AAAS and BBS – not sure you’re allowed both in one puzzle, though apparently you are. GOONTOUR looks weird, and recalled a Matt Jones(?) puzzle that had MYHEARTWILLGOON (clued as what will break if you dump me, mook or similar). This is echoed further by THEMOB.