The Fireball puzzle is a contest this week. Review to come after the contest deadline closes. 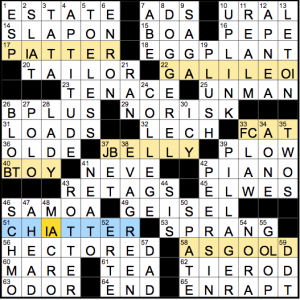 This is a theme that resists description. It’s a little rebus, a little Schrödinger, and a little two-words-in-one-entry. Much easier to explain by example:

I enjoyed this solve. The aha moment came fairly quickly, but there was so much theme to discover that I didn’t get bored. I think of this as a signature Matt Ginsberg-style theme: “given wordplay rule X, what are the best examples?” with loads of theme answers (see also this paronomasia puzzle, words pronounced differently when capitalized, onomatopoeias, this other letter substitution puzzle, and so on). EVA GREEN, DOGGEREL, and EGGPLANT are the highlights of the ballast fill, which is otherwise solid: extremely impressive given that there are seven (nay, fourteen!) intersecting theme answers. Just a spare ERTE here and there as glue to hold the grid together.

With Schrödinger themes like this one, there are bound to be one or two clues that work slightly better for one entry than the other, but I think overall the seven Schrödinger clues work really well. I actually didn’t see the JET/BET clue until I did the write-up, and I thought it was going to refer to Jet magazine and the TV channel BET.

LET ON / LET IN isn’t the most exciting substitution, but the clue [Admitted] changes the meaning of these two phrases so radically that I actually found it to be an asset. The across entries were all fine examples of the wordplay in question, though PITTER-PATTER and CHITTER-CHATTER were a little similar for my liking. But I’m nitpicking at this point. This was a solid Thursday puzzle.

Lovely clue at 1a, [Something you must be willing to leave?] for ESTATE, followed up by the rare exclamation-point clue at 7a, [Them’s the breaks!] for ADS.

Working my way methodically down the grid, and with the title in mind, I noticed all the OKs in the long Across answers, except for one: COME TO PAPA. The revealer at 62a is OK BY ME with the clue [“I’m good with it,” or a description of eight occurrences in this puzzle]. My initial instinct, without fully processing the “eight occurrences” part, was that the theme answers all had OK and ME in them. This is borne out all the way through the grid until, yup, COME TO PAPA. No OK. What gives? 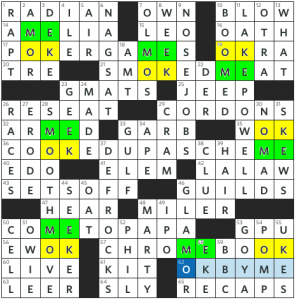 The answer is that the OKs are paired with MEs either above or below them. And as pointed out, there are eight such pairings. This is best explained visually, so I won’t bother listing all the entries and clues

This is pretty cool and an impressive construction, especially up top where the ME in POKER GAMES lines up perfectly with the OK in SMOKED MEAT (although I gotta say, if you’re having a BBQ and “SMOKED MEAT” is on the menu, either identify that meat to me, or I’ll go with the vegetarian option). Stacking themers is hard enough, but stacking them such that four theme-essential letters line up like that is serendipity.

All the OK words are solid (WOK, EWOK, OKRA, etc.) as are all the ME words (AMELIA, ARMED, etc.). But look in the Down direction. The constraints are just as tough in that direction (although Benjamin has a little more leeway as to whether to put the ME on top of the OK or vice versa). But everything checks out: AMOR, DEKE, OLMOS, WEEK, BOOMED, NOMAD, GEEK, etc.). Sure there’s some crosswordese in there, but nothing beyond the pale. The most beautiful bit is SMOOTH MOVE, which is fantastic in its own right, but which has two MOs in it, both of which are thematic. A really impressive find there!

There are a lot of thematic constraints everywhere in the grid. And yet Benjamin is still able to give us fun fill in NOSE JOBS, LAKE POWELL, SETS OFF, and CORDONS.

I think the toughest entry for some would be 53a GPU [PC’s video-handling chip]. It stands for Graphics Processing Unit and is designed to take the load off the CPU when handling graphics-heavy programs. Don’t know that it’s ever appeared in a crossword before, but I think the crossings are fair (GOYA, POMP, and UKES).

Subtle but extraordinarily well-put-together grid. Fun fill and clever clues. 4.25 stars from me. 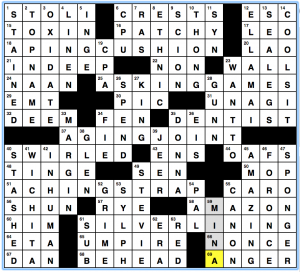 It’s BEQ Thursday time – this week’s puzzle is titled “Hold on Hope” (though maybe that’s supposed to be “Hold On To Hope”?), and it’s a little trickier to understand, theme-wise, than the last few puzzles have been:

I would have loved if the revealer went with SILVER LININGS just for verb tense resolution’s sake in its clue, but this is pretty good otherwise – the chemical symbol for silver, Ag, surrounds the otherwise normal theme entries – PIN CUSHION, SKIN GAMES, GIN JOINT, and CHIN STRAP all got a makeover.

Great news! You’re now familiar with ELLA MAI’s “Boo’d Up” and can no longer complain when you see it clued in a puzzle! 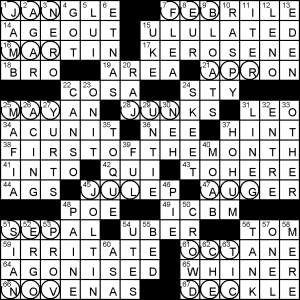 I didn’t pay that much attention to the theme while solving, and that had me questioning several fill choices. I now see the answer to most of my concerns was, “because of theme answers”. The FIRST (three letters) OFTHEMONTHs are all found in the puzzle. I’ve added circles to the grid that were there in my Across Lite version, but there may have been in some other iterations.

ETNAS stuck out as a weird plural in a seemingly easy corner, but that’s because there are two themers there. LINEG is pretty arbitrary – it could be any letter if you don’t know your tax? forms – so you only have one shot at AU?ER. AUGER is a reasonable word most of us will know, but I can see some DNFs happening there. There is a second shot if you noticed the theme – the AUG is the first of August. Again it’s a theme entry constraint: __N_G hasn’t got much going for it. DECKLE was wholly new to me, also a themer, but I was able to piece it together from downs.

Mystery clue: [Mix with a horse], TOM – actor most of us? have forgotten about.

I dunno, this theme created plenty of constraints to filling, but it didn’t afford much in the way of pay-off for me in terms of interesting entries.