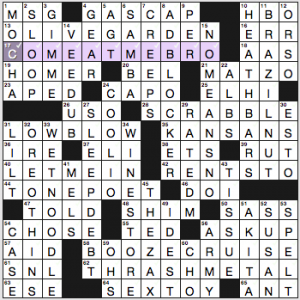 I doubt this puzzle is really assertively Saturday-hard, even though my solving time suggests it is. I just kept finding myself keying in the wrong letters, and I was also distracted by the TV show (on the Science channel) Engineering Catastrophes. (Baltimore railroad wall/road collapse? High drama! Also, I learned that the Leaning Tower of Pisa began leaning while they were building it, so they just kept going but made the levels uneven in an attempt to correct for the lean.)

First up, there’s a clue that doesn’t sync up with my understanding of the term. BOOZE CRUISE is clued 58a. [Wasted vacation days?], suggesting that you take a BOOZE CRUISE that lasts multiple days. As far as I’ve heard, a booze cruise is more like a three-hour tour, a quick party cruise just off shore. Chicago booze cruises are party boats, British ones involve crossing the English Channel to purchase cheap booze, and these Caribbean ones are 2- to 5.5-hour jaunts.

Fave fill: OLIVE GARDEN (which I never noticed had a hidden VEGA in it), “COME AT ME, BRO,” MATZO, SCRABBLE, LOW BLOW, THRASH METAL, SEX TOY, OREO THINS, SLEEP DEBT (I need to catch up!), AD BLOCKER, “NO MEANS NO,” HEATH BARS, and the less tasty BRAZIL NUT.

34d. [Establishment to which customers have come for years?], WINE STORE. This clue. Does it mean “to which customers have come to buy specific vintages”? That doesn’t quite work for me. Also, WINE SHOP sounds more right to my ear than WINE STORE. Now I’m thinking of the “jerk store” episode of Seinfeld. If you shop at oenocentric retail establishments, what do you call them?

24d. [“Sweet”], “COOLIO.” Poor Coolio, losing his crossword real estate to a slangy word. It’s quite possible people weren’t using lowercase “coolio” before he came along. It’s also possible it was existing slang he used for his stage name. 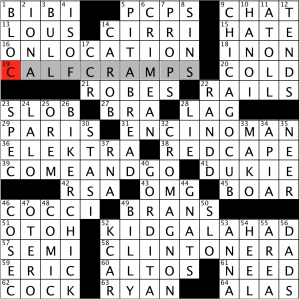 With that title, I expected something with DNA or RNA crossing something else, but the theme gimmick is slightly different — and it didn’t fall into place for me until the final down entry: [56d: What the answers to the starred clues are, to the words they intersect at 19 Across, 52 Across, 9 Down and 26 Down]: DADS. So! We have animal DADS crossing animal offspring:

Lots of other juicy fill from Ms. Burnikel, including ON LOCATION, GORDITA, CLINTON ERA, and PITA BREAD. OTOH, the SW corner was a little sticky with COCCI, OTERO (is that a singular OTERI?), and COSEC (short for cosecant?).

Let’s shotgun an ICEE for [31a: 1992 teen flick with Sean Astin]: ENCINO MAN, co-starring Brendan Fraser as the titular [32d: Paleo diet adherent?]: CRO-MAGNON and Pauly Shore, as, well, a character who sounded a lot like Pauly Shore. “He’s dope! I’d go out with him!” 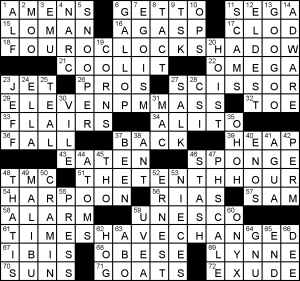 TIMESHAVECHANGED would make a good title. Alas, we don’t have titles, so it’s assigned a role as second revealer. When you already have the more explicit FALL/BACK denoting “change hour by one” it’s tautological. It seems to serve to pad out the theme, which only has three other entries: FOUR(FIVE)OCLOCKSHADOW, cheatily spelt ELEVENPMMASS, and THETENTH(ELEVENTH)HOUR. Colourful, idiomatic phrases, though wish there was a fourth to round things out.

Elsewhere, not too much to remark on, for better or worse. A couple of awkward plurals, but generally filled with care: