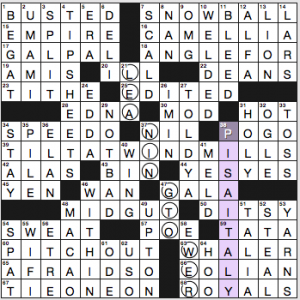 Election returns are coming in and my shoulders keep inching up next to my ears. So a quick recap here, and you’re welcome to chit-chat about crosswords as much as your heart desires. The theme is the Leaning Tower of Pisa, depicted in those circled squares spelling out LEA/NIN/G TO/WER on a slant. 38d. [Home to this puzzle’s featured structure, as hinted at by the starts of the answers to the starred clues] clues PISA, ITALY, and the starred answers are ANGLE FOR, TILT AT WINDMILLS, PITCH OUT (with a basebally clue that makes no sense to me, having not heard this term before), and TIP SHEETS, all starting with the leaning words ANGLE, TILT, PITCH, and TIP.

Wasn’t I just mentioning the Leaning Tower the other day? If you’ve got cable with on-demand, look for the Science Channel show Engineering Catastrophes, the episode that includes the “who the hell approved this building plan” Leaning Tower.

Likes: Pretty CAMELLIA, “AFRAID SO,” UMAMI (though, truth be told, I’ll take sweet over umami any day). Mehs: EDDA as crosswordese (please let the Norse Eddas play a central role in all future Thor movies), but I guess the rest of the fill didn’t irk me.

New byline! Either this is a genuine debut or it’s another pseudonym for editor Mike Shenk. Let’s see. Is Mike Shenk possibly a SHOVEL MAGNATE? Or maybe he’s one of those HOT SALVAGE MEN we all know.

Actually, I have it on good authority that this is a debut, so congratulations Thomas!

It’s not often that a puzzle will make you laugh out loud, but this one did just that for me. Major props to our newest constructor for making a grid that delivered both an aha moment and some solid chuckles!

The first thing to notice is that whole words are circled in the grid. While solving, this gave me no indication of what the theme could be, even when I had most of these filled in. Once I got the revealer, it all made sense, and I laughed. 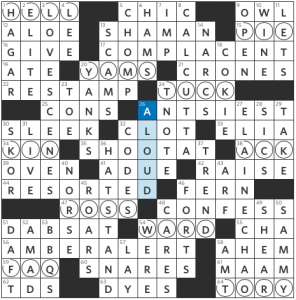 The clue for the revealer at 26d is [How to read the circled answers (please!)]. The answer is ALOUD. So what do we get when we read them ALOUD? Why, it’s a cry for help!

Imagine you’re some poor schlub in a crossword factory toiling away to put out grids with mediocre themes and bland fill. The pay is poor, the working conditions suck, and your mind has been numbed. Suddenly you see a chance for escape if you can just get a secret message out to the public. This puzzle is your chance!

I love this, and I’m still laughing about it. It’s creative, imaginative, and just plain funny. Everything I want in a puzzle.

I also love that all the theme answers are symmetrical in the grid and they’re all solid, normal words. ACK borders on crosswordese, but I think it’s okay. And some people pronounce the individual letters in FAQ, but I’m not one of them.

I don’t really care to talk about the rest of the fill because I love the theme so much, but I suppose I should. It’s all good anyway, with nothing that stuck out at me. The best long bits are LOVE SCENES, CALCUTTA, HAT STAND, and ELAINE CHAO. Very nice!

There’s also AMBER ALERT [Missing child announcement] which serves as the reality check in the grid. The National Center for Missing and Exploited Children reports that somewhere on the order of 1500 children go missing each day in this country. These aren’t necessarily all abductions; some might just be lost children or runaways, but still, that’s a scary number. Here is an FBI-produced app for parents to keep vital statistics and photos of their children if the worst should happen.

That sobering issue aside, this was a wonderful puzzle. One that I’m likely to remember for a long time. 4.5 stars. 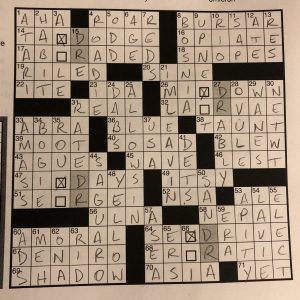 This week’s AVCX puzzle from Francis Heaney was particularly timely – hopefully you did it when it arrived in your inbox on Tuesday.  Let’s take a look at what was going on with all those boxes and shading (which were sadly reduced to mere circled squares in the digital version of the puzzle – there’s only so much AcrossLite can do)

There were four sets of across clues featuring unusual boxes in the grid with shaded squares next door: 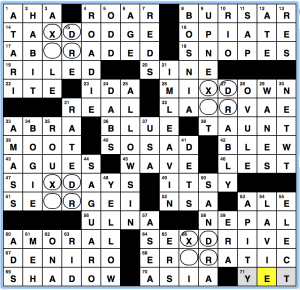 As illustrated by the X’s, we’ve got a lovely reminder to create a BLUE/WAVE and vote for Democrats, as clued by 36A and 45A.  It’s time to get the current administration out of power, and this is just the start.  Let’s keep this momentum up.

Other fill things I liked/had notes about: 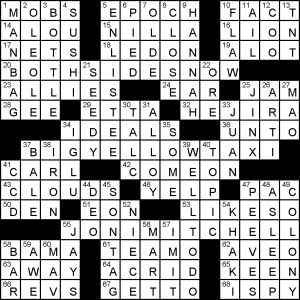 This is straightforward tribute puzzle. I got to BOTH, saw 1968, and filled in BOTHSIDESNOW, JONIMITCHELL then BIGYELLOWTAXI, making most of the rest of the puzzle easy to fill. It includes two of her best known songs, as well as two symmetrical albums – HEJIRA and CLOUDS. Not much more to be said, although BLUE is her most acclaimed album, it isn’t one of a symmetrical pair.

Although most of the puzzle is affected by theme, our constructor pair did manag to include choice morsels: MANBAG, LIKESO, WELLTODO and KHAKI are all fun entries. IGLU , on the other hand, is the ugliest thing here; an extinct spelling forced by the pattern ?G?U.

[Fish dish served with wasabi], SUSHI is not a tight clue. Sushi can have fish, but I feel like rice and seaweed are the most consistent ingredients…

I’m not sure how to rate such a puzzle.
Gareth