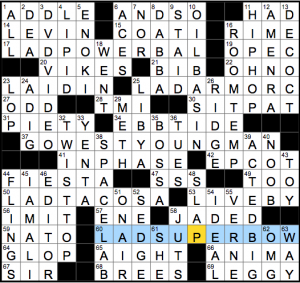 It’s Thursday, and Sam Ezersky is up to his usual tricks. Today it’s a laugh-out-loud revealer to a kooky-looking theme: 37a, [Horace Greeley’s advice, as followed by 17-, 25-, 50- and 60-Across?], is GO WEST, YOUNG MAN. In this case, phrases that normally end in LAD (the aforementioned “young man”) have taken that advice and put that LAD at their western edge (that is to say, the beginning of the phrase):

Tremendously fun Thursday theme. I had the aha moment pretty early on, after getting POWER BALLAD and ARMOR-CLAD, but the revealer was a terrific punchline I didn’t see coming.

The fill sort of flew by the seat of its pants: lots of multi-word phrases with various degrees of out-there-ness. Roughly from best to wackiest, we had HIP-HOP, SPACE LAB, TWIST-TOP, OIL BASIN, LIVE BY,SIT PAT, I AM ALI, DVD VIDEO, EBB TIDE, LAID IN, ROOM TEMP, “I’M IT!”, IN PHASE, ACTED BIG. (I know I missed a few in there, you can delete your comment.) Also, we got the debuts of AIGHT and Drew BREES, and the returns of the slangy VIKES and NOOB. I’m never sure what vowel completes AM?NRA (today it was an E), and I’m sure Sam didn’t love the sibilant SSS, but otherwise this was a pretty clean grid. 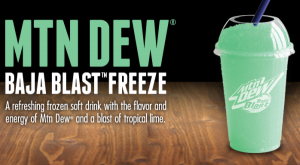 My favorite clue was 44a, [Baja blast] for FIESTA. Taco Bell enthusiasts will understand why. Also liked the OPEC clue [Grp. that’s well-financed?].

That’s all from me today. Great job, Sam! Until next time! 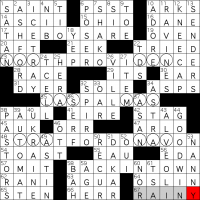 joon here, filling in for jenni with the fireball review this week. this is the most straightforward theme i can remember seeing in the fireball. the reveal entry appears very early on at 17a: {With 58-Across, 1976 Thin Lizzy hit that 23-, 35-, and 48-Across exemplify} THE BOYS ARE / BACK IN TOWN. each of those three aforementioned answers is, indeed, the name of a city containing two boy’s names in reverse:

so that’s the theme. no trickeration here, no rule-breaking, nor really any wordplay for the solver, just for the constructor. i guess it’s interesting, but it left me kinda meh.

the surrounding fill and clues also seemed to be less tricky than a typical fireball puzzle; i finished this in under 3 minutes on paper, very nearly my fastest fireball ever. the fill is, by and large, quite clean considering the five long theme entries (including a central 9, which forces large corners). the use of lots of cheater squares to achieve this level of cleanliness was, i think, a good choice; cheater squares affect a solver’s experience much less than garbage fill.

the puzzle was smooth, but not very exciting, and some of the cluing decisions were baffling to me. 2.9 stars.

I knew I’d seen this theme before! In fact it was just two weeks ago in the NYT. Same exact theme. No doubt both puzzles were in the pipeline for months, so it’s just another case of constructors coming up with the same theme at the same time.

The revealer is POP-UP AD at 68a [Bit of Web clutter, and a hint to making sense of four answers in this puzzle]. Those four answers should be longer than they appear to be; that’s because you need to step up a row to get the letters AD, then step back down again for the remainder of the entry. 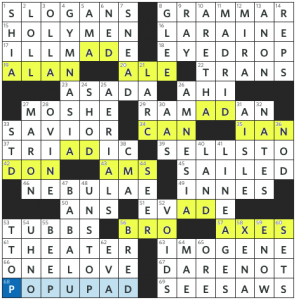 There is one key difference between the grids. In the NYT puzzle, the latter portion of each entry wasn’t clued separately. But today, each one gets its own clue. This disguises the theme for a while longer and explains why AXES is clued mathematically [Quadrant separators].

Maybe it’s because the theme eluded me for so long, that I began to get bothered by some of the rough fill. Starting off with AMS, which I didn’t realize was thematic at the time, but continuing on with stodgy fill like OLLA, ENOW, ANON, ER actress Laura INNES, plural NATES, French ANS [Years, to Yves], and weirdities GYMNASIA, TRIADIC, and MOSHE. I don’t feel I should have to know the first name of Israel’s defense minister from 40 years ago. Heck, I don’t know who the defense minister is today.

Once I cottoned on to the theme though, the puzzle redeemed itself somewhat, but then I spied that extra AD in ASADA at 23a which really seems like it ought to have been removed since it’s right there in the thick of things.

Mostly though, I did like those long corners with SLOGANS, HOLY MEN, EYE DROP ONE LOVE, IMOGENE, SEESAWS, and ARETHA crossing LARAINE (though I spelled her name wrong at first). And BABALU [Desi Arnaz’s signature song] is always fun to come across.

Fun theme and some nice long fill, but there was a lot of mustiness in the shorter fill that detracted from those assets. 3.25 stars. 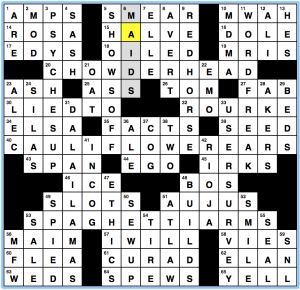 This is a quick one, since I’m in back-to-back meetings today.  Luckily, this puzzle is pretty straightforward and fell pretty quickly:

It’s phrases that involve [type of food] + [plural body part].  Pretty straightforward, I’d expect to see something like this as a Monday NYT (and this felt relatively Monday-ish in terms of fill, minus a few names like Michelle AKERS and brands like CURAD. 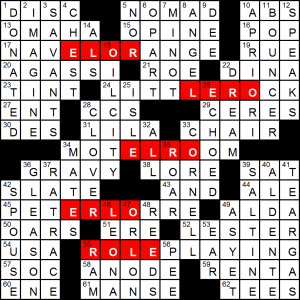 I had no idea of any commonality ’til I got to the revealer. That said, hidden and scrambled tetragram feels a bit of let down for ROLEPLAYING – the letters ROLE being the tetragram. Not sure what else could have been done here, though? Any ideas? You can see the letters highlighted in red in the grid.

The top half felt like it had a US geography trivia mini-theme running through it with tough clues (for me) for OMAHA ([College World Series home]) and LITTLEROCK ([Where I-30 and I-40 meet]), as well as the more difficult OILCITY, [Original Pennsylvania headquarters of Quaker State] and less inferrable MINOT, [Annual North Dakota State Fair site]. NOMAD and MOTELROOM echo the vibe.