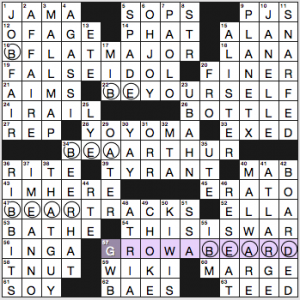 Man, I was just not feeling this puzzle. Some clues weren’t resonating with me, some entries felt weird (or irksomely duplicative), and I didn’t love the theme. Also, I’m ready to fall asleep, which doesn’t make it easier to make sense out of clues.

The theme is explained by 57a. [Do the opposite of shave … as suggested by the circled letters], GROW A BEARD, and the circled letters are stand-alone words in B FLAT MAJOR (ugh, I do not care for such entries, which are always a random crapshoot for this non-musician), BE YOURSELF, the great BEA ARTHUR, and BEAR TRACKS. Note the male-centric nature of the theme—when I “do the opposite of shave,” well, I haven’t once grown a beard.

Good stuff: the journal known as JAMA (sorry, sucky 1-Across if you aren’t a doctor or medical editor, perhaps), YO-YO MA, JOB FAIR, “THAT GUY” (as in “don’t be that guy”), “OH, JOY,” JANELLE Monáe (see “Make Me Feel” from earlier this year—the video costars her bae (note 62a BAES), actress Tessa Thompson, and has an impressively Prince-like vibe), and the intriguing PLANET X.

Alex Eaton-Salners often brings us tricky and unusual themes, but this one is more on the straightforward side. Each theme answer is a definition of a homophone of a number. It just so happens that each of the base numbers in question is twice the previous number (the first one being excepted of course). 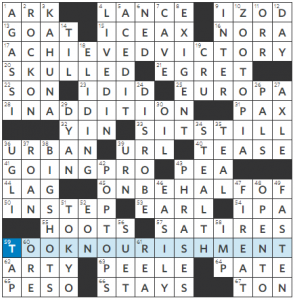 I like the doubling aspect, but truthfully, there aren’t any other numbers that have homophones (except maybe 9 / NEIN). Beyond that, I found the theme underwhelming, especially when you get into theme answers that end in prepositions (ON BEHLAF OF — see also FIRE AT and OPEN TO; “ROCK ON,” on the other hand, is great).

As expected though, I do like the long fill: ZOOTOPIA, BIG SHOTS, “SIT STILL,” GOING PRO, POP TOPS, LIVED-IN, and KAHUNA. There are plenty of solid mid-length entries as well.


Nice fill, but a rather unexciting theme. 3.4 stars. 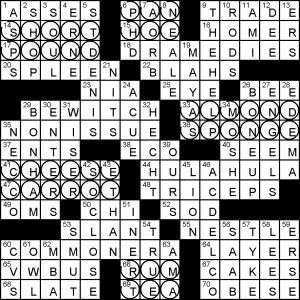 It’s safe to say a lot of us here solve a lot of puzzles (and many of you a darn side more than me!), so it’s not unusual to solve a puzzle and remember another version of it. In this case, an NYT by Liz Gorski from 2016. That one was memorable for me, because Ms Gorski also made an upside-down cake puzzle and baking is a popular subject of hers…

LAYER/CAKES are represented as stacks of answers that are types of cake. Lots of options, although I’m not sure combining the pairs as above is always a good idea taste-wise. That said, I do have a nice recipe for carrot cake with cheesecake icing (icing, not frosting, which is a horrible-sounding word to my ears). I’m planning to bake a cake this weekend at some point, but will probably go for the old standby of chocolate cake…

Stacked answers always create a ton of stress in any grid. That means you get terrible short fill around it, exhibit A – ERNE, exhibit B – AORB; and so it goes. If you want the cake you’re going to have to chew through this first… This one goes all out with the long answers, particularly THEHELP; DRAMEDIES (with an A+ clue – [Seriously funny shows?]; SOCLOSE; and TRICEPS, which does ameliorate things somewhat, I suppose. 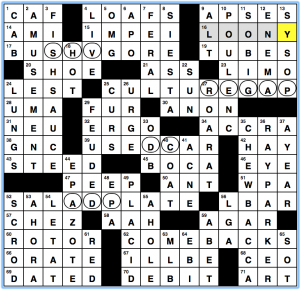 This week’s AVCX puzzle (from editor Ben Tausig) features a topic near and dear to my heart: mostly obsolete technology.  Let’s take a look under the hood:

Yep, we’ve got VHS, PAGERs, CDs, and PDAs all making a COMEBACK in the grid by, uh, being reversed in the theme answers.  This is pretty straightforward and on track with the 2/5 difficulty rating this was given.

Other fill things I liked/had notes about: