I guessed the theme from the title which isn’t really what I’m hoping for in a Thursday grid. But still, the entries aren’t bad.

The revealer is TICS at 63a [Idiosyncracies added to this puzzle’s longest answers]. 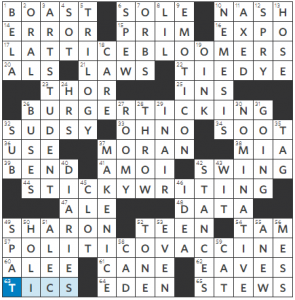 A pretty straightforward theme for a Thursday (alas), but a good grid nonetheless. 3.4 stars.

What a treat! Patrick’s puzzle has Orca written all over it (figuratively speaking). This is one my favorite puzzles ever.

I knew there was a rebus pretty early, because I had SHAME at 1a and that made HAMLIN the logical choice for 2d’s [“L.A. Law” actor]. The rebus showed up at 18a [Exactly the stated amount], and I decoded it as NO MORE NO LESS. Aha! The title must mean there are two answers (“and”) which can substitute for each other (“or”). Clever!

I found the next one at 59a [Discussing at tedious length]. I looked at GO ON IA NG GO OU NT and thought it was GOING ON ABOUT, but that doesn’t work. Turns out it’s GOING ON ON ABOUT. Huh? Oh! That’s GOING ON AND ON ABOUT with the AND missing. So I looked back at 18a and realized it was actually NO MORE AND NO LESS. More clever! The third rebus appeared at 89a [Fairy tale featuring a gingerbread house]; when I added the AND to the letters I found, it turned into HANSEL AND GRETEL. Fun!

I finished the puzzle and didn’t get Mr. Happy Pencil because Black Ink (the software I use to solve .puz files) doesn’t like rebuses. I confidently took my screen shot for this writeup and checked the solution to make sure I didn’t have any typos. I didn’t – but 79a showed up as incorrect. It’s [Question posed to a team captain] and I’d filled in TAILS because I had the T from 62d [Characterized by longing] – WISTFUL. Except….WISHFUL also works. Sure enough, HEADS fits all the crosses as well. And I realized that the [Question posed to a team captain] is actually HEADS OR TAILS?

Further investigation found two more: I’d filled in TRICK for 24a [Cry while in costume], and TREAT also works because it’s TRICK OR TREAT, of course. And then there’s 45a [Ultimatum given to derelicts], which I’d answered as SHAPE UP. I looked again and realized that the phrase is SHAPE UP OR SHIP OUT and, sure enough, the crossings work.

Here is my grid and the grid that Peter sent out. Mine has clue numbers; the rebuses are much more legible on his. 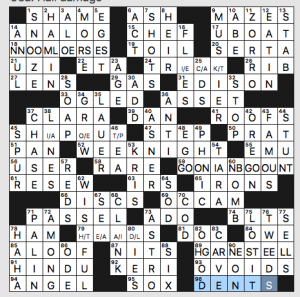 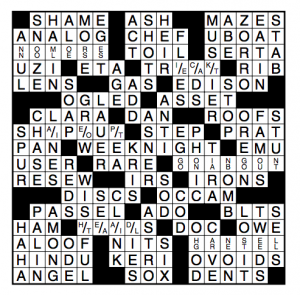 Don’t mind me; I’m just going to stare in amazement at this grid for a while longer.

Oh, what I didn’t know before I did this puzzle: that ZORRO appears in “The Curse of Capistrano.”

I also don’t usually give stars, but for this puzzle….five. 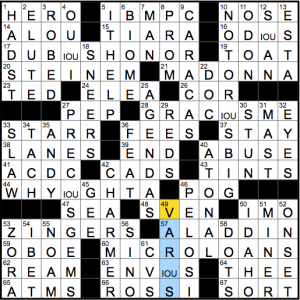 It’s Thursday, and power duo Jeff Chen and Mary Lou Guizzo have a special… offering for us. Get it? Offering?

Fine, moving on. The revealer here is at 60a, MICROLOANS [Money to start small businesses … or a hint to five squares in this puzzle]. And sure enough, there are five rebus squares in this puzzle containing the letters IOU (which isn’t so much a loan as it is an acknowledgement of debt, but I’m prepared to let that slide). Those squares are featured in the following ten entries:

All good by me. Solid theme with a few really cute theme entries (mostly the long ones), and entirely appropriate for Thursday. The cluing felt quite tough (that is, appropriately tough for Thursday). A few notables:

Since I’m running late tonight, I’ll go ahead and stop there. Fun stuff! Until next time! 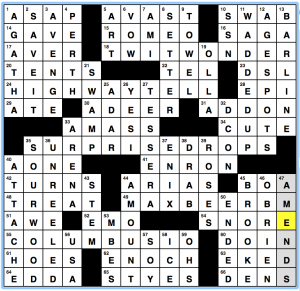 Shout out to BEQ for this Thursday’s puzzle, “Shout Outs”.  It’s easy to figure out what’s going on in the puzzle from that title:

Grokking the theme here took me a sec, so it was nice to have the two-part revealer explain that an OH is missing from each theme entry.  We’ve got TWO HIT WONDER, HIGHWAY TO HELL, MAX BEERBOHM, and COLUMBUS OHIO.  I don’t like the use of the IO moth here, since that feels a little more obscure than the moon of Jupiter, but YMMV.

(According to the internet, KT Tunstall is a two-hit wonder, but she’s done a lot of great stuff since “Black Horse and the Cherry Tree” and “Suddenly I See” – her latest album, WAX, is one of my favorites this year)

The rest of the puzzle is pretty solid – I liked WADDED UP, TESSERA, and SOURWOOD amongst the downs. 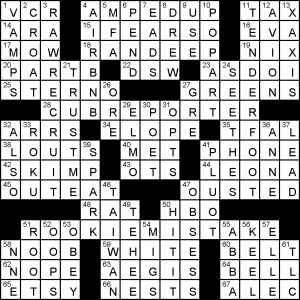 This is a loose, and rather unusually presented grid and theme today from Zhouqin “C.C.” Burnikel. It has left-right only symmetry to accommodate irregular theme lengths. Many of the theme entries are also quite short. Each describes a specific variety of TYRO – a RAWRECRUIT is associated with the military; TENDERFOOT is linked here to the Scouts – I didn’t know that but Google suggested it is historically true; CUBREPORTER covers the media; a WHITE/BELT is split over two parts and is associated with martial arts; lastly, a NOOB is associated with online gaming (I’d been reading this as gambling till now, gaming makes way more sense). Above this last line is the revealer: ROOKIEMISTAKE, of which only the ROOKIE part really applies. GREENS is not thematic though, at least I don’t think so – It isn’t asterisked nor clued thematically. Lively entries make up for the comparatively loosely defined theme.

The grid design is very segmented. I spent nearly half my time, and ended with an error in, the top-middle, which has only two ways in. I got AIRBNB without too much hassle, though that is one of many entries that give this puzzle a more contemporary feel (along with ROKU, that only seems vaguely familiar, and PLUOT). I also had AMPEDUP but couldn’t parse RANDEEP or IFEARSO easily. I also didn’t know EADS or DSW. In the end I settled on EADE/DEW as my final crossing (partly influenced by trying ERDE and ENDE in desperation.)