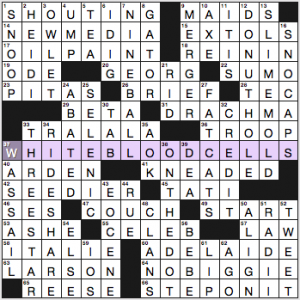 Hey, it’s a puzzle by my fellow Chicagoan, Kyle Dolan! The crossword felt pitched right to the usual Friday difficulty level. It’s running late, the shower is calling my name, and I keep mistyping words (really—”difficulty” began as “ficci,” which, no). So, in short:

I like SHOUTING clued via all-caps typing, and “NO BIGGIE” atop “STEP ON IT.” THREE-STAR Michelin ratings beside RIDESHARE, ON THE DOT, SLIME MOLD, DONUT HOLE, SNO-CAPS, good stuff. I will know my WHITE BLOOD CELLS count tomorrow when I get my monthly lab results.

Four stars from me for this one. Good night! 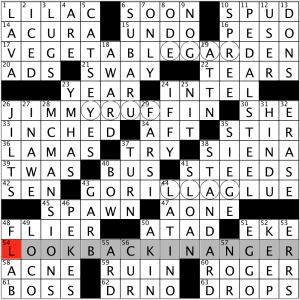 Today’s theme takes as its inspiration a groundbreaking British play of the 1950s that introduced the phrase “angry young man” into English parlance. Synonyms for anger are flipping out (also a synonym for anger) in base phrases:

Smashing job as usual for a Chronicle puzzle, taking something from literary culture and devising an air-tight theme set from it. So I start a revolution from my bed, cause you said the brains I had went to my head. 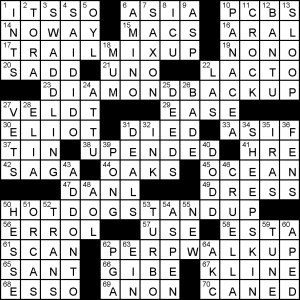 If anyone is still reading this, my apologies for the lateness.

Yesterday’s theme involves adding UP to the end of four answers, making them UPENDED. The consistent placement and letters make this letter addition theme a little easier than some Fridays. The set was very nicely chosen, particularly lively base phrases were TRAILMIX, HOTDOGSTAND, and PERPWALK all of which would be at home anchoring a stack in a themeless.