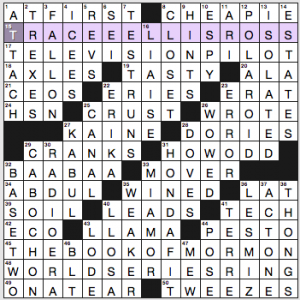 I am a big fan of both of these gentlemen, separately and as a constructing duo. Super-nice guys and whizzes when it comes to filling grids, writing clues. Highlights in this puzzle: TRACEE ELLIS ROSS (I blanked on which order the post-TRACEE names came in, filled them in wrong, had 13d ISOLATED to correct my path), THE BOOK OF MORMON, WORLD SERIES RING (I recently saw a picture on Facebook of a friend wearing a Cubs WS ring! I’m not sure whose ring it was …), TWEEZES, CABOCHON, ERIKA Alexander (Maxine Shaw forever), “MI AMOR,” HONDA FIT, and POLAROID.

Fill that stuck out like a sore thumb: none, if you ask me.

Cute wordplay going on this theme in which a noun acting as an adjective (what a grammarian would call a noun adjunct) swaps places with the verb which is actually the homonym of a noun and which had been gerundized into a different noun. Got all that? Much easier to see in action than to explain, especially since I’m not even sure if I explained it correctly. 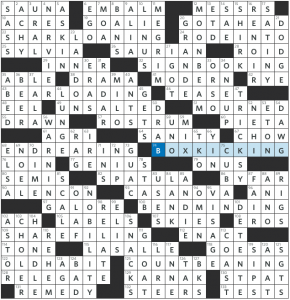 So…mostly good, eh? Despite catching on to the theme early on, I was still looking forward to what was coming next. That’s the sign of an enjoyable theme.

It feels like you could go on and on with this theme, but I did a quick search at onelook.com on the string “* *ing” and found the pickings slim on the first page of results. Take, for example, “carbon dating.” This results in DATE CARBONING, which obviously doesn’t work. If the first noun can’t be made into a verb (or if the verb can’t equate to a noun) then it’s a dud.

The rest of the grid: I like TRICKSY, MOONBEAM, DETENTE, NOBILITY, OLD HABIT, ROSTRUM, SPATULA, CASANOVA.

Toughies include: ALENCON [Lace town of Normandy], MEGRIM [Quaint caprice] crossing SAURIAN [Lizardlike] (it helped to think of dinosaurs), and KARNAK [Luxor neighbor] crossing abbreviation BKS [Vols.] It also took me a while to untangle that lower left corner, what with ACH, ASTOR, and CHOLER. But I’m not complaining; it’s all fair game, and for the most part, I felt the fill was really quite good. 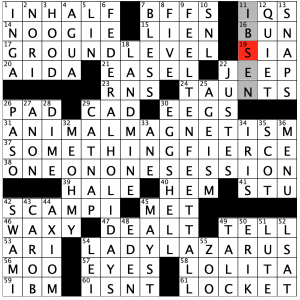 If nothing else, this constructor has the coolest name EVER! Zipped through this one fairly quickly, which was nice and stress-free, unlike today’s Stumper. There are 5 15-letter entries interwoven nicely in this grid, and the 72-word count makes for pretty good fill; I don’t see much obscurity at all in this grid. I still think this clueing needs to be just a smidge tougher. 4.7 stars for this one.

Some faves, including all of the 15s:

Wow. That was too many! Maybe there is more good in this grid than I thought! 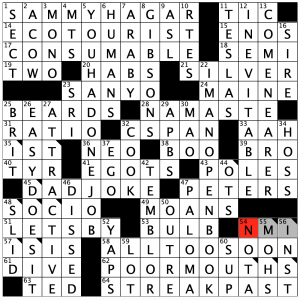 The upper left corner of this filled in easily for me, with 1-Across being a gimme. (See comments below) But after that, progress ground to a halt, and I struggled to finish this in just over 21 minutes. Still not sure where I would rank Matthew Sewell as far as Stumper difficulty level; not quite Longo or Wilber, but harder that Stan for sure. Yes, I have several error marks in this one, and I will explain some of that below, but suffice it to say some of these terms are new to me! 4.3 stars this Saturday morning.