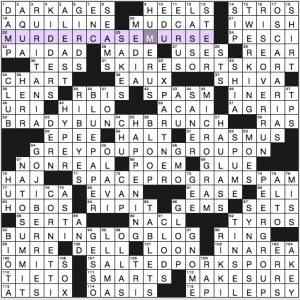 Four more things before I grab a bite and a shower and hit the road: 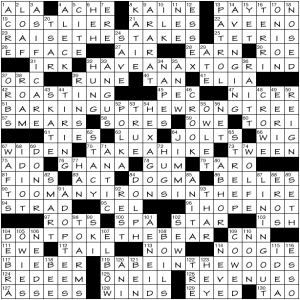 The latest in the irregular Captain Obvious oeuvre, wherein idioms are gently misconstrued a bit too literally.

Hit and/or miss, as per usual. So… thanks, Captain Obvious?

Not my favorite Burnikel crossword. Each theme answer has circles at the beginning and end showing us a word that could be used for “bro,” which is “hugging” the answer. 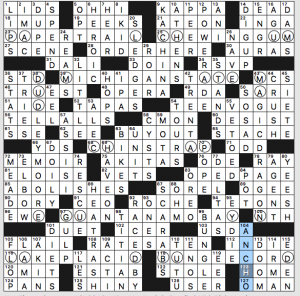 There’s an egregious dupe in the clue for 38d and the answer to 108a [Is pure perfection, scorewise] – RATES A TEN. There are a lot of other Dudley Moore movies that could have been used. My personal favorite is “Foul Play,” and there’s always “Arthur.” There’s absolutely no reason for that dupe – and before you tell me that “ten” is a common word, I’ll remind you that the movie “10” is about a woman who RATES A TEN. And no, I’m not going to rant about objectification. I’m too tired.

As I said, not my favorite puzzle. There was nothing to figure out about the theme and nothing funny. It was just “oh, look, there are words that mean the same thing.” Um, OK.

Worth noting: 54a. [Elle Girl rival] Teen Vogue. This is an awesome magazine with article that challenge the status quo about politics, sex, gender, and the world in general. I never thought I’d buy my kid a subscription to a fashion magazine. She was astonished when she got the first issue.

What I didn’t know before I did this puzzle: that GUANTANAMO BAY was a battle site of the Spanish-American War. 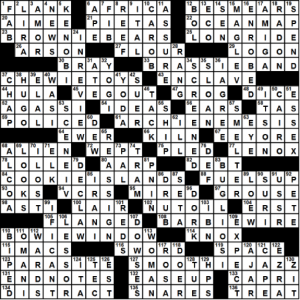 On seeing the title of this puzzle, I went immediately to id est in my mind. Then, when 23a [Little Girl Scout’s teddies?] panned out to be BROWNIE BEARS, I got the theme and knew I was in for a treat. So, we have a most entertaining layout here:

Other items of interest include:

A fun puzzle all the way around, nits and all. Took me right at 30 minutes to solve on the laptop.